Iowa Gets 'Social' at Kinnick Stadium 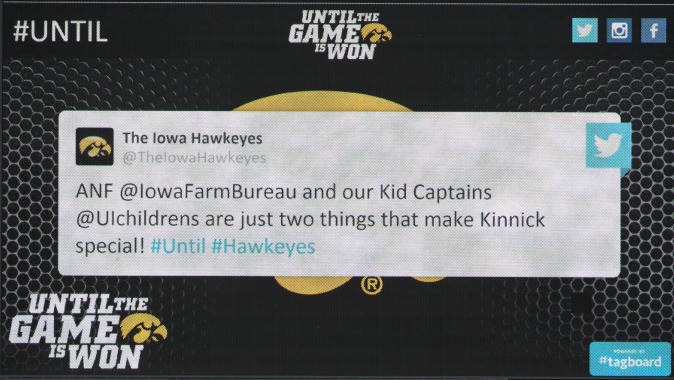 IOWA CITY, Iowa – Looking for the most efficient tool to introduce the “social conversation” that is happening on the days leading up to gameday at historic Kinnick Stadium and on gameday itself, the UI Athletics Depatment staff turned to “Tagboard” as its technology solution.

Tagboard uses hashtags to search for and collect social media within seconds of being posted on networks like Twitter and Facebook. Robust tools offer the power to select specific posts which, in the case of the UI Athletics Department, were approved for display inside Kinnick Stadium periodically on the northeast videowall during the Iowa Corn Cy-Hawk Series Game.

“I’d suggest that our experiment two weeks ago was a success and that our fans can probably expect to see more `social commentary’ in that location of Kinnick during the last four games of the 2014 regular season,” said Rick Klatt, associate athletics director of external affairs.

The UI Athletics Department has programmed its Tagboard to seek messages posted to Twitter, Facebook, and Instagram accounts that include the hashtag “#Hawkeyes” and “#UNTIL”, with the latter being the short version of the Hawkeyes current marketing effort, “Until the Game is Won.”

“We deliberately `quietly’ pushed out the message to participate in the experiment leading up to the last home football game and, given the level of response and the ease of operation, we’ll ramp up our efforts to provide our fans a chance to be more engaged and, of course, to look for their Tweet or Facebook or Instagram post on display during the game,” said Lisa Pearson, the UI’s director of marketing.

“The staff at Tagboard has been fantastic to work with and really helped make the integration into our game day experience seamless. I foresee that we will be able to implement more posts as the season progresses on. I couldn’t be happier with the support we have received from Tagboard thus far,” said Trisha Stortz, assistant director of HawkVision, the video production unit of the UI Athletics Department responsible for much of the content broadcast on the videowalls inside Kinnick Stadium on gamedays.