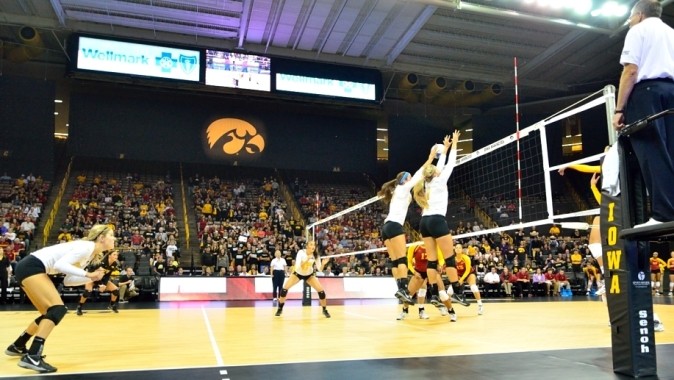 HOME OPENER
After 12 matches on the road, the University of Iowa volleyball team returns to Iowa City for its home opener against No. 8 Nebraska on Saturday, Sept. 27 at 7 p.m. (CT). The Hawkeyes enter the match with an 8-4 overall record and a 0-1 mark in Big Ten play, while the Cornhuskers are 7-3 overall and 1-0 in conference play.

PROMOTIONS
A pregame tailgate will begin at 6 p.m. by the West entrance of Carver-Hawkeye Arena. The first 250 fans in attendance will get free pizza. Head volleyball coach Bond Shymansky will greet fans at the tailgate and invite all to attend the first Chalk Talk session of the season in the Hadley Club Room prior to the match. Posters, schedule cards and key chains will be given away and the team will sign autographs on the court following the match.

DÉJÀ VU
The Hawkeyes opened Big Ten action at No. 8 Nebraska earlier this week on Sept. 24 in Lincoln, Nebraska. Iowa fell to the Cornhuskers in three sets (25-18, 25-13, 31-29). Alessandra Dietz and Alex Lovell led the Hawkeye offense in the match with a .462 hitting percentage and nine kills, respectively. Mikaela Gunderson posted a team-high four blocks in the contest, Alyssa Klostermann dished out a team-most 19 assists, and Michelle Fugarino anchored the back line with 11 digs.

APPROACHING A MILESTONE
First-year head coach Bond Shymansky owns a career record of 298-113 (.725) and is just two wins from logging his 300th career victory. This is his 13th season as a head coach. He spent the past five seasons (2009-13) at the helm of the Marquette volleyball program and seven seasons before that leading Georgia Tech (2002-09).

A POWERHOUSE CONFERENCE
The Big Ten is considered the premier volleyball conference and continues to remain a force in Division I athletics. Six Big Ten teams appeared in the most recent release of the AVCA Division I Coaches Poll (Sept. 22) including No. 3 Penn State, No. 5 Wisconsin, No. 8 Nebraska, No. 15 Purdue, No. 16 Illinois and No. 17 Minnesota. Michigan State and Northwestern received votes.

CHAMPIONSHIP WEEKEND
The Hawkeyes played to a 4-0 record at the 2014 SDSU Challenge to earn the first tournament championship of the Bond Shymansky era. Iowa opened the tournament with a pair of 3-0 victories over Eastern Illinois and North Dakota on Sept. 12 and concluded the weekend with a 3-1 win over Florida International and a 3-0 win over host South Dakota State on Sept. 13.

For several Iowans, playing volleyball for the Hawkeyes is in their blood. O’Deen’s mother, Mueller’s sister, and Smith’s mother all played volleyball at the UI. Shymansky, an Iowa City native, earned a Bachelor of Arts in Communications in 1995 and a Master of Arts in English Education in 1997 from the University of Iowa.