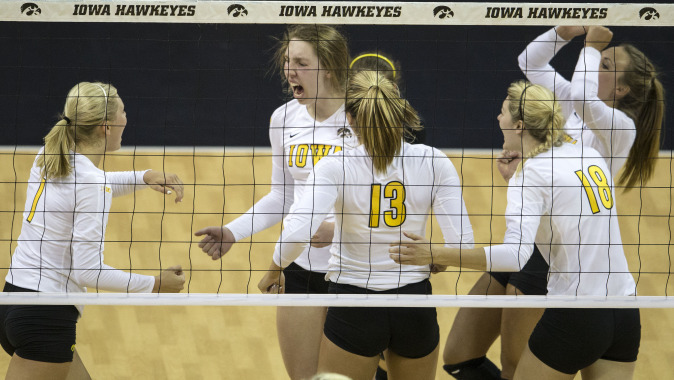 COMPETITION SUMMARY
The University of Iowa volleyball program plays live on the Big Ten Network for the first time on Wednesday at 8 p.m. (CT). The Hawkeyes take on No. 15 Illinois. The team’s home stand continues with a 7 p.m. match against Northwestern on Saturday. Saturday is Attacking Breast Cancer Night and Girl Scout Night in Carver-Hawkeye Arena.

COVERAGE RUNDOWN
Wednesday’s 8 p.m., match will be televised live on the Big Ten Network with Lisa Byington (play-by-play) and Michelle McMahon (color) on the call. Links to live audio with Tim Keating and Gametracker (livestats) are available for each competition on Hawkeye All Access at hawkeyesports.com. Fans can watch Saturday’s match live online through Hawkeye All Access.

PROMOTIONS
The first 200 fans to arrive for Iowa’s Wednesday match against Illinois will receive a complementary rally towel. Saturday’s match against Northwestern is Attacking Breast Cancer Night and all fans are encouraged to wear pink. The first 200 fans will receive a free pink Iowa volleyball pennant. It is also Girl Scout Night. Doors open an hour before each match and a team autograph session will take place at the completion of all home matches.

HOME COURT ADVANTAGE
After spending the first month of the season on the road, the UI volleyball team has enjoyed a pair of top 20 crowds at home in Carver-Hawkeye Arena. The fourth-largest crowd in program history (2,631) attended the home opener against Nebraska on Sept. 27, and the 13th-largest crowd (1,723) attended the Hawkeyes’ match against Penn State on Oct. 11.

The Hawkeyes also welcomed a crowd of 1,203 to Carver-Hawkeye Arena for their match against Ohio State on Oct. 10, raising their average fan draw to 1,852. In 2013, UI volleyball averaged 1,265 fans at home during the Big Ten season.

RISING STAR
Despite facing four top Big Ten opponents, sophomore Lauren Brobst has had an impressive October. The Sioux City, Iowa, native leads the team with 43 kills (3.58 per set) and a .327 attack percentage this month. She has led the team in kills five-straight matches: vs. Nebraska (9), vs. Ohio State (6), vs. Penn State (9), at Michigan (15) and at Michigan State (13). Her 15 kills against the Wolverines marked a new season-high.

SWITCHING IT UP
After running a 6-2 offense, the Hawkeye volleyball team transitioned into a 5-1 offensive system against Ohio State and Penn State. Freshman setter Kaylee Smith earned the first starts of her Iowa volleyball career, dishing out 26 assists against the Buckeyes and 17 against the Nittany Lions.

Five of Iowa’s losses in conference play have been to a team in this week’s poll. The Hawkeyes fell to Nebraska twice, and Penn State, Ohio State and Michigan once.

APPROACHING A MILESTONE
First-year head coach Bond Shymansky owns a career record of 298-118 (.716) and is just two wins from logging his 300th career victory. This is his 13th season as a head coach. He spent the past five seasons (2009-13) at the helm of the Marquette volleyball program and seven seasons before that leading Georgia Tech (2002-09).

ON DECK
Iowa continues Big Ten play on the road with matches at Wisconsin on Wednesday, Oct. 22, and at Minnesota on Saturday, Oct. 25. Both competitions begin at 7 p.m. (CT) and will be streamed live online through BTN Plus available at btn2go.com.

Season ticket packages include a t-shirt and access to Chalk Talks with the Iowa coaching staff in the Hadley Club Room 30 minutes before every home match on the first floor of Carver-Hawkeye Arena. Tickets can be purchased online at hawkeyesports.com, by phone at 1-800-IA-HAWKS or in person at the UI Athletics Ticket Office in Carver-Hawkeye Arena. Single match tickets are also available for $5.