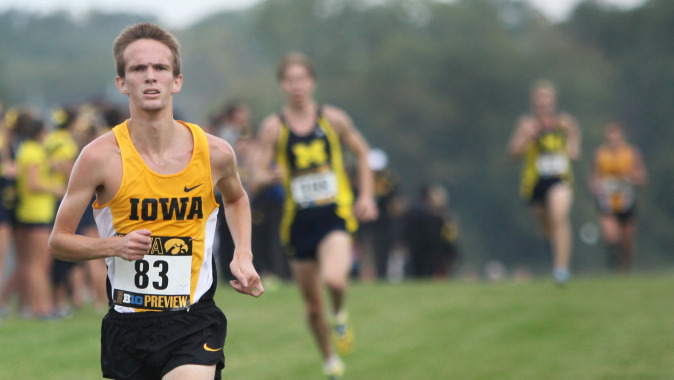 THIS WEEK
The University of Iowa cross country team heads to Terre Haute, Indiana for the Pre-National Invitational on Saturday. Competition begins at 10 a.m. at the LaVern Gibson Championship Cross Country Course. The men compete on an 8,000-meter course and the women will compete in the 6,000-meters.

IN THE RANKINGS
The men’s team moved up one spot since the latest USTFCCCA polls, released Oct. 6. The Hawkeyes are ranked ninth in the Midwest Region.

The women were led by sophomore Carolyn Newhouse, who completed the 5,000-meter course in 17:39. The team finished 7th in the Gold Division out of 27 teams. Freshman Marta Bote Gonzalez was Iowa’s second finisher (17:43).

2013 PRE-NATIONAL INVITATIONAL
Senior Kevin Lewis has led the Hawkeyes in his previous eight races, including the 2013 Pre-National Invitational where he ran a collegiate best 8,000-meter time of 24:15. Also recording a collegiate best time at last season’s event was junior Nate Ferree, who crossed the finish line in 24:58.

On the women’s side, sophomore Tess Wilberding clocked a collegiate best time in the 6,000-meters, crossing the line in 22:36. Sophomore Katie Adams led the Hawkeyes at the 2013 Pre-National race, finishing 66th in a time of 22:16 to help Iowa to a 13th place finish out of 35 teams.

THOUGHTS FROM ANDERSON
“Our goal this weekend is to compete in a manner that reflects our training and gain additional momentum that we can carry forward to the Big Ten Championships. Lifetime best performances should be the goal for each individual and a collective team effort that ensures we are competitive against the field.”