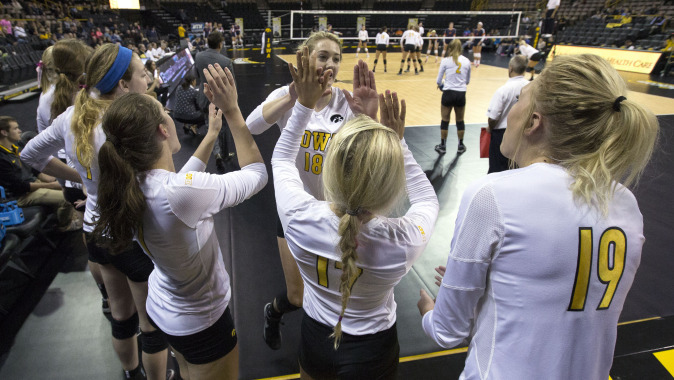 COMPETITION SUMMARY
The University of Iowa volleyball team (11-12, 3-9) is back in action on Mediacom Court in Carver-Hawkeye Arena with two Big Ten competitions this week. The Hawkeyes face Indiana (14-10, 5-7) on Wednesday and No. 12 Purdue (19-5, 9-3) on Saturday. Both matches are scheduled to begin at 7 p.m. (CT). Wednesday is Dollar Dog Night and Saturday is Junior Hawk Club Night.

FOLLOW ALONG
Hawkeye fans can watch this week’s action live online through BTN Plus at btn2go.com. Links to live audio by Tim Keating through Hawkeye All-Access and Gametracker (live stats) are also available for each match on the volleyball schedule page at hawkeyesports.com.

2 IN A ROW
The Hawkeyes defeated Maryland (3-0) and Rutgers (3-1) on the road last weekend and enter their home stand with a two-match Big Ten win streak. It’s the first time Iowa has won two-straight conference matches since 2012 when the team topped Indiana (3-1) on Oct. 5 and then-ranked No. 12 Purdue (3-0) on Oct. 6. Those victories also came on the road.

With a win against Indiana on Wednesday, Iowa’s conference win streak would stretch to three — a feat that has not occurred since 1994 when the team defeated eight-straight Big Ten opponents and earned an NCAA Championship berth. The Hawkeyes were also awarded three conference wins in a row in 2000, on an Ohio State forfeit followed by wins over Michigan (3-2) and Michigan State (3-2).

B1G VICTORIES
Iowa volleyball owns a 3-9 mark in Big Ten play after recording wins against Northwestern (3-2), at Maryland (3-0) and at Rutgers (3-1). It is the first time the Hawkeyes have won three conference matches in a season since 2009, when the team posted a 5-15 record.

Four of Iowa’s eight remaining conference matches are against unranked foes. If the Hawkeyes post wins in those four matches, it will bring the team’s win total to seven — the highest for the program since 2000 when the team went 9-11 in Big Ten action.

FRESHMAN ON FIRE
Freshman right side hitter Taylin Alm came off the bench and contributed in a big way last weekend, helping the Hawkeyes to victories at Maryland and Rutgers. The Mitchell, South Dakota, native compiled a .472 attack percentage and 20 kills in the two-game stretch.

B1G=BIG DEAL
Six Big Ten institutions appear in the most recent release of the American Volleyball Coaches Association Division I Coaches Poll (Nov. 3). No. 4 Wisconsin, No. 6 Penn State and No. 9 Illinois rank in the top 10, while No. 12 Purdue, No. 13 Nebraska and No. 18 Ohio State appear in the top 20.

Six of Iowa’s nine Big Ten losses this year have been to a team currently ranked in the top 25. The Hawkeyes have eight conference matches remaining in 2014, four against currently ranked opponents.

B1G STAT RUNDOWN
? Iowa is 12th in the Big Ten standings with a record of 3-9 heading into week 7 of the conference season. The Hawkeyes trail Northwestern and Minnesota, who are tied for 10th with matching 4-8 marks, but are ahead of Maryland (2-10) and Rutgers (0-12).
? Senior Alessandra Dietz ranks fifth in the Big Ten in service aces per set (0.31) and ninth in hitting percentage (.348).
? Sophomore Alyssa Klostermann is ninth in the conference in service aces per set (0.28) and 15th in assists per set (5.65).
? Freshman Michelle Fugarino is seventh in the Big Ten and second among freshmen in digs per set (4.06).
? Junior Mikaela Gunderson is 12th in blocks per set (1.07).
? Freshman Kaylee Smith is 14th in assists per set (5.82).
? Freshman Taylin Alm is 14th in the league in hitting percentage (.294).

ON DECK
UI volleyball travels to Penn State for a 6 p.m. (CT) match next Wednesday before returning to Iowa City for a home match against Wisconsin at 7 p.m. on Saturday. The first 200 fans in the door for the Wisconsin match will receive a free Iowa volleyball tumbler. Doors open an hour before first serve.

GET YOUR TICKETS
Purchase tickets for any remaining Iowa volleyball home match for $5 apiece. Youth can attend matches free of charge. Tickets can be purchased on the day of the game or in advance through the UI Athletics Ticket office at 1-800-IA-HAWKS or online at hawkeysports.com.