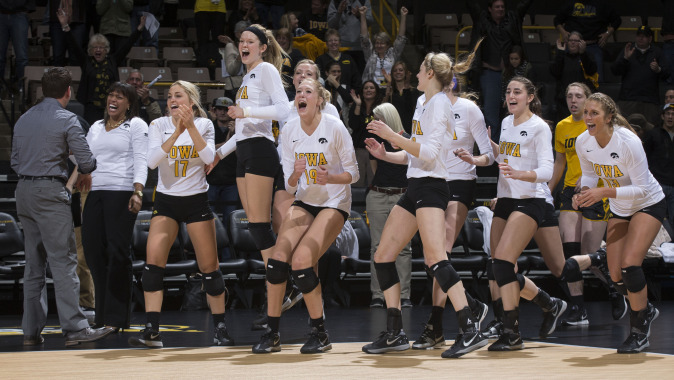 FOLLOW ALONG
Fans can watch the Northwestern match live online through BTN Plus on btn2go.com. Audio by Tim Keating is available for both matches on Hawkeye All-Access at hawkeyesports.com. Gametracker (live stats) are also available for each contest.

COMING ON STRONG
Freshman Taylin Alm has emerged as an offensive weapon for the Hawkeyes late in the Big Ten season. The 6’5″ right side hitter has recorded double digit kill totals in three of the team’s last five matches. Her hot streak began at Rutgers, when she reached double digits for the first time and earned a career high with 11 kills. She followed it up with a 10-kill performance against Indiana. Most recently, Alm posted 10 kills against No. 4 Wisconsin.

In the five game stretch, Alm owns a .368 attack percentage and a 2.32 kill per set average with 44 total kills.

B1G WINS
The Hawkeyes have five victories in Big Ten action with four conference matches remaining in the regular season. That is the most for the program since 2009, when Iowa posted a 5-15 record. Iowa recorded its first win at home against Northwestern on Oct. 18, outlasting the Wildcats in five sets. It was the first win for the program over Northwestern since Oct. 23, 2009, when Iowa swept the Wildcats in Carver-Hawkeye Arena.

The Hawkeyes collected four Big Ten wins in a row — the longest conference win streak since 1994 when the team recorded eight consecutive victories and went on to clinch a berth to the NCAA Tournament – with a sweep of Maryland, a four set win over Rutgers, a five set victory against Indiana and a four set win over No. 12 Purdue. The victory against Purdue was the first ranked win for the program since 2012.

CONFERENCE RANKINGS
? Iowa is tied for 12th in the Big Ten standings along with Northwestern. Both teams are 5-11 in conference action.
? Senior Alessandra Dietz is seventh in the conference in service aces per set (0.27) and eighth in hitting percentage (.354).
? Junior Mikaela Gunderson is 13th in blocks per set (1.05).
? Sophomore Alyssa Klostermann ranks eighth in service aces per set (0.27) and 15th in assists per set (5.33).
? Freshman Michelle Fugarino is seventh in the conference and second among freshmen in digs per set (3.90).
? Freshman Taylin Alm ranks 15th in the Big Ten and fifth among freshmen with a .299 hitting percentage.
? Freshman Kaylee Smith is 14th in assists per set (5.80).

SUCCESS IN 4 OR MORE
In matches lasting more than three sets, the Hawkeyes like their chances of securing a win. Iowa volleyball is 7-1 on the season in matches lasting four or five sets. The squad is undefeated in four-set contests (5-0) this season, with victories over UT-San Antonio, Idaho State, Florida International, Rutgers and Purdue. Iowa is 2-1 in five-set competitions, with wins over Northwestern and Indiana. The lone loss in four or more sets came against Illinois (3-2).

B1G=BIG DEAL
Six Big Ten institutions appear in the most recent release of the American Volleyball Coaches Association Division I Coaches Poll (Nov. 17). No. 2 Wisconsin, No. 4 Penn State and No. 10 Illinois rank in the top 10, while No. 11 Nebraska, No. 16 Purdue and No. 20 Ohio State appear in the top 20.

Eight of Iowa’s 11 Big Ten losses this year have been to a team currently ranked in the top 25. The Hawkeyes have four conference matches remaining in 2014, one against a currently ranked opponent (Ohio State).

UP NEXT
Iowa ends its regular season with a home stand in Iowa City. The Hawkeyes take on Maryland on Nov. 26 at 4 p.m., and conclude their season against Michigan State on Nov. 28 at 7:30 p.m.

#GREATTODAY The Hawkeye volleyball program has been focused on one moniker since the arrival of head coach Bond Shymansky and his staff. Whether student-athletes are on the court, training in the weight room or learning in the classroom, the Hawkeyes want to be #GreatToday. A major shift in a program can be challenging, but striving for greatness in each area with exceptional effort has been helpful for the group.