Recognizing the Best in Iowa Track and Field 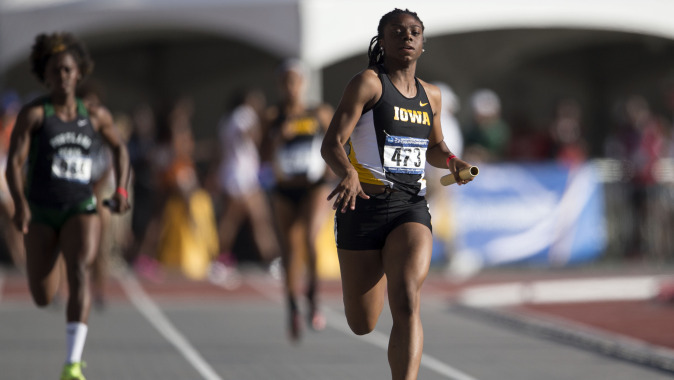 IOWA CITY, Iowa — The University of Iowa track and field program proudly saluted and celebrated the accomplishments of its student-athletes at the team’s annual awards banquet on Dec. 7. The following Hawkeyes were acknowledged for their brilliant performance in athletic competition during the 2014 campaign.

Sophomores Brittany Brown and O’Shea Wilson garnered one of the highest citations as recipients of the 2014 MVP award, while senior Kevin Lewis took home Most Outstanding Cross Country Runner.

Brown, a California native, is returning as the team’s top gun in the 100-meters (11.61) and 200-meters. Not only is she the school record holder in the 200-meters at 22.95, she is also the first Hawkeye in school history to run under 23 seconds at that distance.

Wilson of Houston, Texas, closed his 2014 season earning All-America honors for his role on the 400-meter relay that placed sixth at the NCAA Championships. Individually, Wilson excels at the long jump and the 200-meters, having led the team in both events during the outdoor season. His 200-meter time of 20.82 ranks eighth in school history, while his long jump mark of 25-2 (7.67m) falls seventh on Iowa’s all-time list.

Sophomores Aaron Mallett and Elexis Guster were honored with the Most Outstanding Freshman accolade.

Guster returns this season as the reigning Big Ten Outdoor Champion in the 400 meters. The Atlanta, Georgia, native recorded a collegiate-best time of 52.77, which ranks fifth all-time at Iowa. She also served on two school record-setting relays (400-meter, 1,600-meter).

Mincy, a two-time All-American in the 400-meter relay, has the second fastest indoor 60-meter time in school history at 6.73, in addition to leading the team in the 100-meters (10.46) last outdoor season.

Other coveted honors were awarded to the following student athletes:

The Hawkeyes officially start the 2015 season Jan. 10 hosting Illinois and Missouri at the Border Battle. Competition begins at noon (CT) at the UI Recreation Building.