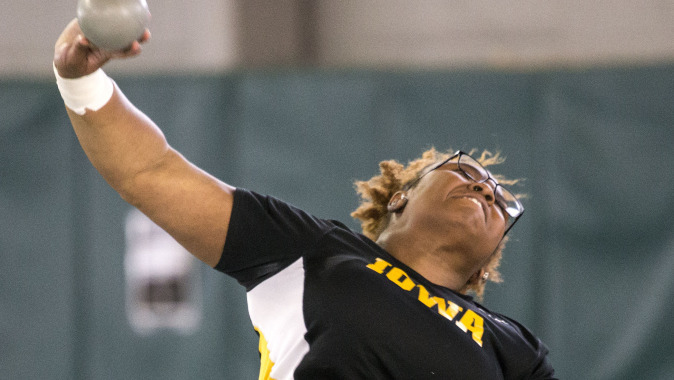 THIS WEEK
The University of Iowa track and field team travels to Ames, Iowa for the Big Four Duals at Iowa State University on Saturday. The event will be held at the Lied Recreational Center with field events beginning at 12 p.m. and running events following at 1 p.m. In addition to Iowa, the event features teams from Northern Iowa, Iowa State, and Drake.

STRAIGHT OFF THE BLOCKS
The University of Iowa track and field team opened the 2015 indoor season with six first-place finishes at the Border Battle on Jan. 10. Among the top finishers for the Hawkeyes were sophomore Alana Jones in the women’s 3,000 meters (10:13.84) and senior Gabe Hull in the men’s shot put (59-0 ¼; 17.99m).

HUNT RECORDS PERSONAL BEST
Sophomore Alexa Hunt recorded a personal best mark of 46-8 ¾ (14.24m) to win the women’s shot put at the Border Battle to be one of six individuals to record victories on the team. Her throw lands 10th on Iowa’s all-time list.

Holder is a first-time recipient of the weekly conference award. She is the first to be recognized with the honor since Betsy Flood in 2010.

Watts will compete in the 200- and 400-meter races at this weekend’s event, while Alexia is expected to appear in the 800-meter field.

LEWIS CONTINUES TO SHINE
Kevin Lewis continues to knock off seconds in the men’s mile. The senior opened the season with a career-best performance 4:07.19 at the team’s annual Black and Gold Intrasquad on Dec. 6. That time would have ranked seventh on Iowa’s all-time list. Lewis carried the momentum through to the Border Battle. His converted time of 4:06.29 ranks 17th in the nation.

IN THE SPOTLIGHT
Aaron Mallett claimed his first collegiate hurdle victory at the Big Four Duals a year ago. The sophomore most recently appeared on Iowa’s 24 Hawkeyes to Watch list following his victory in the 60-meter hurdles at 8.04. He owns the fourth fastest time in the event at 7.88, while senior Keith Brown recorded a personal best 60-meter hurdle time of 8.08 at the Border Battle to rank eighth all-time at Iowa.

60 METER SHOWDOWN
Sophomore Brittany Brown and junior Lake Kwaza share the women’s indoor 60 meters school record. In her first collegiate race, Brown broke the 31-year-old record with a 7.41 in the prelims of the Big Four Duals. Kwaza quickly matched the record when she ran the same time in the finals to win the event. She ran a time of 7.44 at the Border Battle. The duo is expected to go head-to-head again at this weekend’s meet.

NEXT ON THE BLOCK
The Hawkeyes will travel to Lincoln Nebraska for the Frank Sevigne Husker Invitational on Feb. 6-7.