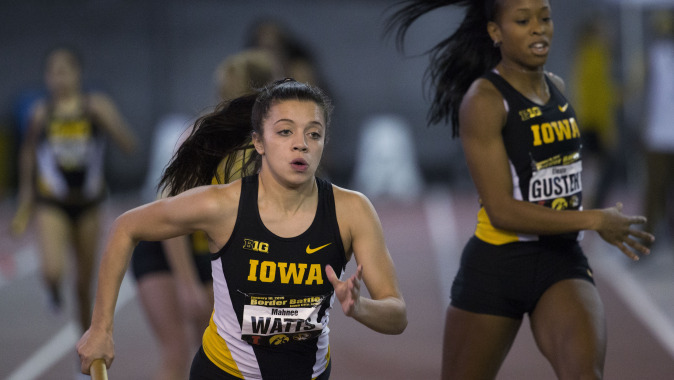 “The biggest thing is that we performed really well in every event area and competed as a complete team,” Director of Track and Field Joey Woody said. “To not only walk away with a lot of individual champions, but individuals who finished second, third, and fourth gives our program the depth we need to take the next big step toward the Big Ten Championships.”

The men’s mile received another solid performance from Kevin Lewis. The senior clocked 4:07.50, a time that lands him tenth on Iowa’s all-time list, to finish third overall.

Also making her way on Iowa’s top-ten list is freshman Jahisha Thomas in the 60-meter hurdles. The London native clocked a personal best 8.60, which marks the seventh fastest time in school history and falls 12th in the Big Ten.

For the men, senior Keith Brown recorded a career-best performance of 8.03 in the preliminary round of the 60-meter hurdles, placing him seventh on the all-time list for Iowa and the Big Ten. Sophomore Aaron Mallett (7.96) and Brown (8.12) ultimately came in second and third for the Hawkeyes. Mallett’s time puts him fourth on the conference list.

Lake Kwaza repeated her victory from a year ago in the 60-meters. The senior sprinted to victory in 7.42, falling just shy of the school record (7.41) she set at last year’s meet alongside sophomore Brittany Brown. Kwaza currently holds the second fastest time in the Big Ten.

Junior MonTayla Holder sealed a first-place finish in her first collegiate 800-meter race, crossing the line in 2:10.34. That time ranks ninth in school history and fourth in the Big Ten.

“It felt like death, but I’m glad I did it,” Holder said. “I ran the 800 to make the 600 feel easier. Running the 800 really pushed me to a limit I’ve never experienced and hopefully that will come back to benefit my performance in the 600- and 400-meter races.”

Junior James Harrington captured gold in the men’s 200-meters (21.51), while sophomore Elexis Guster raced to the women’s title (24.33). Their times rank seventh and 12th in the conference, respectively.

Junior Kevin Spejcher reached new a height in the men’s high jump when he finished second with a new personal best 7-0 1/2 (2.15m). That mark ranks third all-time at Iowa and second in the Big Ten.

The Hawkeyes concluded with victories in both the men and women’s 1,600-meter relays. Wolff, sophomore Brendan Thompson, Mallett, and Davey composed the men’s team, while the women’s team consisted of Guster, Watts, Holder, and Kwaza.

The Hawkeyes return to action Feb. 6-7 with the Frank Sevigne Husker Invitational in Lincoln, Nebraska.