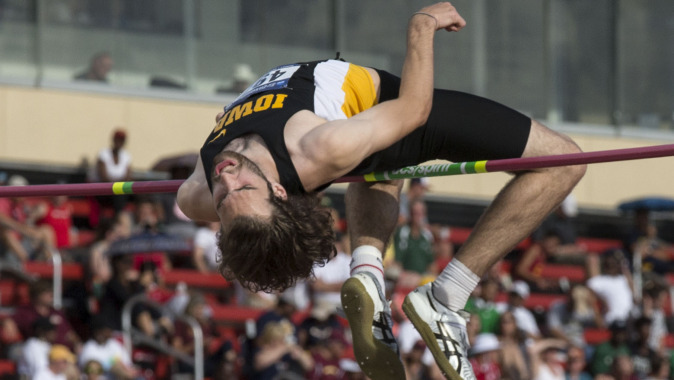 GENEVA, Ohio — University of Iowa senior Babatunde Amosu was crowned the Big Ten triple jump champion for the second consecutive year on the final day of the Big Ten Indoor Championships on Saturday. The men’s team tallied a total of 49 points to finish seventh, while the women’s team (22 points) finished 13th.

“The whole aim of today was to go into the competition and put a mark down in the first round,” Amosu said. “The only thing I was thinking about was the fact that I had to PR in order to get the gold again. Big Tens is where it’s at and this is our main competition. I thought to myself if I’m going to put out a big mark it might as well be right here, right now.”

Sophomore Aaron Mallett was crowned Big Ten runner-up in the men’s 60-meter hurdles, cruising to the finish in a career-best 7.78. That time falls second on Iowa’s all-time list and ranks ninth nationally.

Sophomore Elexis Guster snatched a fourth-place finish in the women’s 400 meters. She tied her personal-best time of 53.92, which continues to stand fourth on Iowa’s all-time list.

The Hawkeyes received a pair of fourth-place finishes in the 200 meters. Sophomore Brittany Brown (23.82) represented Iowa in the women’s race, while junior James Harrington (21.22) competed in the men’s field.

Junior Will Teubel toed the line for the men’s 800 meters. The Lisbon, Iowa, native logged a time of 1:50.18 to earn fourth, respectively.

Making his championship debut, Carter Lilly captured a fifth-place finish in the men’s 600 meters. The freshman clocked a personal-best time of 1:18.37, which ranks sixth in school history. Junior MonTayla Holder took seventh in the women’s 600 meters, racing to the finish in 1:31.81.

Next up on the track was the women’s 1,600-meter relay. The quartet of Kwaza, Holder, sophomore Mahnee Watts, and Guster clocked 3:38.56 to finish fifth, overall.

“On the women’s side, it was very disappointing and not what we were expecting,” director of track and field Joey Woody said. “We had a lot more opportunities and we didn’t take advantage of them. We had a lot of athletes who were ranked a lot higher and didn’t really perform today. I thought the men’s team did exceptional. We outscored our paper points and improved upon last year’s 10th-place team finish.”