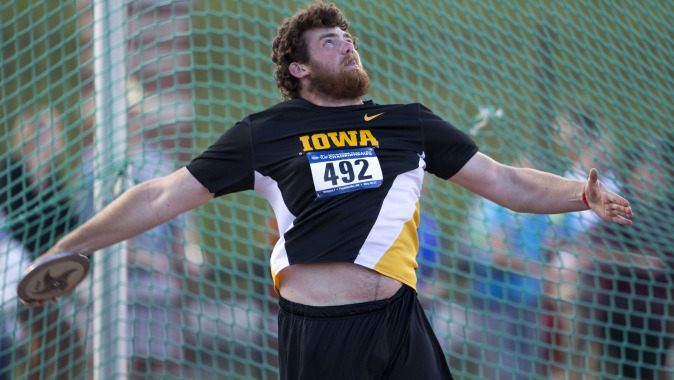 TEMPE, Ariz. — The University of Iowa track and field team captured five event titles during the final day of competition at the Baldy Castillo Invite in Tempe, Arizona, on Saturday. The men’s team amassed a total of 63 points to finish fourth, while the women’s team (68 points) finished fifth, overall. The event was housed at the Sun Devil Stadium on the campus of Arizona State.

“This was a great start to our outdoor season,” director of track and field Joey Woody said. “We challenged the athletes to go after performances that will make it to the NCAA first round, and we had a few individuals who lived up to that challenge.”

One week removed from his sixth-place finish in the 60-meter hurdles at the NCAA Indoor Championships, sophomore Aaron Mallett returned to action Saturday in the men’s 110-meter hurdles. The St. Louis, Missouri, native posted a personal best 13.85, a time that ranks sixth on Iowa’s all-time list and will stand second in the national rankings, to win the event.

Junior James Harrington raced to the men’s 200-meter title, setting a personal best 20.98. His time would also rank second in the national standings.

Junior MonTayla Holder captured gold in the women’s 400-meter hurdles. The Indianapolis, Indiana, native topped the national leaderboard when she crossed the line in 58.59. Junior Mitch Wolff nabbed a fourth-place finish in the men’s race with a personal best 52.79.

Senior Gabe Hull also kicked off the outdoor season in winning style with a toss of 181-02 feet (55.22m) in the men’s discus throw. Junior Dakotah Goodell (157-01, 47.88m) contributed with an eighth-place finish in the women’s contest.

Freshman Jahisha Thomas claimed a runner-up finish in the women’s 100-meter hurdles. She clocked the sixth-fastest time in program history at 13.80.

Kwaza returned to the track for the 400 meters when she earned a second-place finish in 56.27. Freshman Sheridan Champe (57.65) rounded out the event scoring with an eighth-place finish, overall. Thompson led Iowa in the men’s race (9th; 48.68).

Returning to the track, the Hawkeyes received a pair of fifth-place finishes from freshman Carter Lilly (1:50.87) and sophomore Katharina Trost (2:10.26) in the 800 meters.

The meet concluded with the 1,600-meter relays. The quartet of Wolff, Thompson, Harrington, and Lilly (3:11.57) logged a third-place finish, overall, while the women’s team of Guster, Brown, Holder, and Kwaza took the title in 3:40.31.

“We had a number of personal bests today,” Woody said. “Kerry had a big PR in the long jump, which would have scored at the Big Ten indoor meet. It was great to see James win the 200 meters and finally break the 21-second barrier for the first time in his collegiate career. MonTayla and Mitch both had great opening times in the 400-meter hurdles and ran great relay splits in the 1,600-meter relay. I was also pleased to see Dakotah perform near her PR in the javelin. We are excited to have the next two weeks to train and build on this great start.”

Iowa will split competitors for the Florida Relays in Gainesville, Florida, and the Stanford Invitational in Palo Alto, California, from April 3-4.