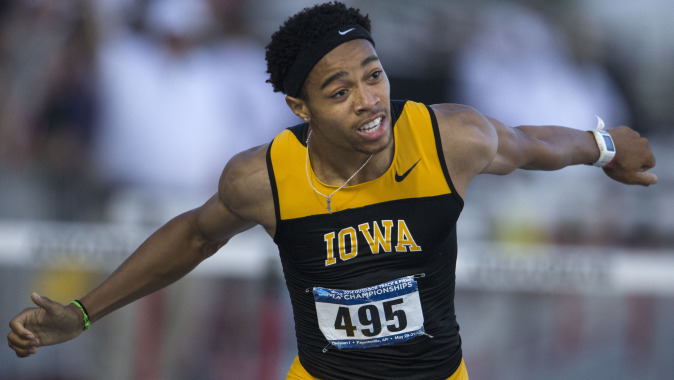 GAINESVILLE, Fla. — University of Iowa track and field sophomore Aaron Mallett recorded two career bests during day one of competition at the Florida Relays in Gainesville, Florida, on Friday. The event was held at the Percy Beard Track inside the James G. Pressly Stadium on the University of Florida campus.

Mallett continued his ascent on the national leaderboard and Iowa’s all-time list in the men’s 110-meter hurdles when he clocked 13.60, a time that ranks second on both. He gathered a seventh-place finish and was the first collegian to cross the finish line. Mallett returned to the track for the 400-meter hurdles when he raced to a personal-best 51.56 to finish 16th, respectively.

“We had great performances today, and it was highlighted by Aaron’s 110-meter hurdle performance that landed him second in the nation,” director of track and field Joey Woody said.

Junior MonTayla Holder had a strong showing in the women’s 400-meter hurdles when she clocked a season-best 58.29 to finish ninth, overall.

Junior James Harrington threatened his collegiate-best time of 20.98 in the men’s 200 meters, which he set two weeks ago at the Baldy Castillo Invite in Tempe, Arizona, when he finished 19th in 21.05. Sophomore Brittany Brown (23.32) notched a 13th-place finish in the women’s contest.