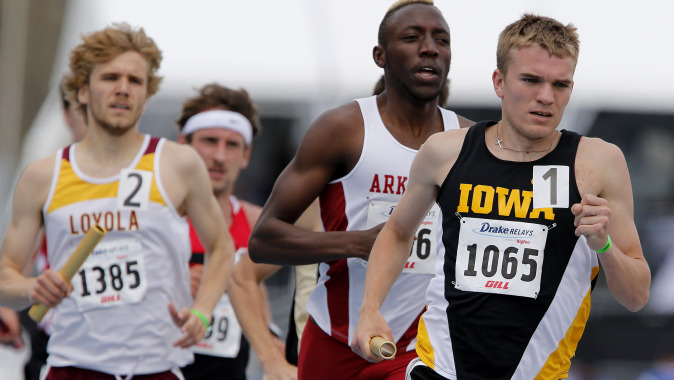 THIS WEEK
The University of Iowa track and field team heads to Des Moines, Iowa, for the Jim Duncan Invitational from April 10-11. The event begins at 3:30 p.m. (CT) on Friday and continues on Saturday at 9:15 a.m. (CT) at Drake University.

WEEKEND COMPETITOR HIGHLIGHTS
Senior Shannon Maser and sophomore Katharina Trost are among the group of 10 Hawkeyes scheduled to compete in the women’s 1,500 meters. The pair will also appear in the 800 meters along with sophomore Mahnee Watts. Junior James Harrington (100 meters, 200 meters) and sophomore Aaron Mallett (400-meter hurdles) will represent the Iowa men in their respective events.

MALLETT, BROWN SHINE IN SUNSHINE STATE
Sophomores Aaron Mallett and Brittany Brown led the Hawkeyes at the Florida Relays on April 4. Mallett (7th/13.60) was the first collegian to cross the finish line in the men’s 110-meter hurdles. His time ranks second in the nation and first in the Big Ten. Brown crusied to a season best in the women’s 200 meters to finish 13th, overall. Her time of 23.32 tops the conference leaderboard and stands eighth in national rankings.

FROSH BREAKS RECORD
Freshman Marta Bote Gonzalez raced to an all-time best in the women’s 3,000-meter steeplechase at the Stanford Invitational in Palo Alto, California, on April 3. The Merida, Spain, native crossed the line in 10:23.15 to finish second in her section, ousting the previous school record set by Daniel Berndt (10:26.54) in 2011. Her name currently stands at 17th in the nation and second in the Big Ten.

LEWIS RACES TO CAREER BEST
Senior Kevin Lewis clocked a personal best performance in the men’s 10,000 meters. His time of 28:59.62 ranks 19th nationally and falls second in the Big Ten. Lewis continues to stand third on Iowa’s all-time list in the event.

MEET THE RECORD HOLDERS
Brittany Brown returns as the school-record holder in the women’s 200 meters. The sophomore rewrote the record book at last year’s NCAA West Preliminary when she cruised to the finish in 22.95, becoming the first Hawkeye to run under 23 seconds. Senior Annemie Smith captured the school record in the hammer throw at last year’s Arizona State Invite at 198-1 (60.38m), while senior Gabe Hull claimed the discus school record at last year’s Musco Twilight (207-1, 63.11m).

NEXT ON THE BLOCK
Iowa returns to action at the Mt. Sac Relays in Walnut, California, from April 17-18.