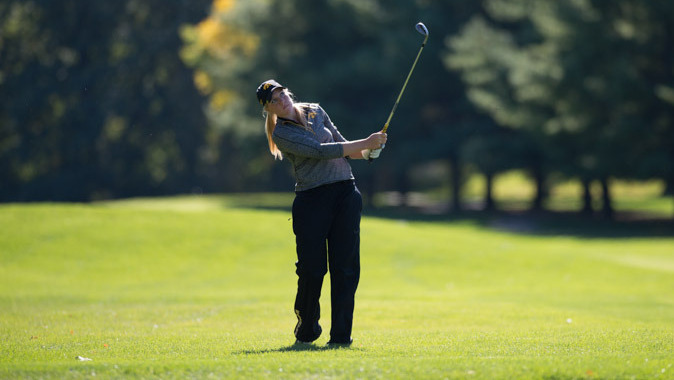 THIS WEEK:
The University of Iowa women’s golf team travels to Indianapolis for the Big Ten Championships. The 54-hole tournament (par 72, 6,221 yards) will begin Friday with the first 18 holes. The action will continue into Saturday with the second round and conclude Sunday with the third and final round.

THE LINE-UP:
Slated at the top of the line-up will be Elisa Suarez, followed by sophomore Jessie Sindlinger second, Amy Ihm will play in the third position. Rounding out the bottom half is Shelby Phillips, followed by Jessica Ip playing fifth, and Morgan Kukla at the sixth position.

LAST SEASON AT B1G CHAMPIONSHIPS:
At last season’s Big Ten tournament in French Lick, Indiana, the Hawkeyes posted a three-round total 926 (+62), including rounds of 214, 306 and 306. Karly Grouwinkel provided the best finish for Iowa posting a total 228 (+12), en route to a tie for 13th. As a freshman, Jessie Sindlinger tallied the second best finish registering a three-round 231 (+15). She ended the competition in a tie for 23rd.

IHM LEADING THE WAY:
In two of the past four tournaments, Amy Ihm has finished in the top 25. Most recently she carded a three-round total 220 (+4), posting rounds of 75, 74 and 71, en route to a 12th place finish at the BYU Entrada Classic. She has been the team’s top finisher in three of the four Spring tournaments. At this point in the 2014-15 season, the junior has registered a 76.8 per-round scoring average, third best on the team.

LAST TIME OUT:
The University of Iowa women’s golf team wrapped up its regular season at the Lady Buckeye Invitational on Sunday. The Hawkeyes shot a three-round total 926 (+62), including rounds of 306, 302 and 318. Iowa finished ninth in the 12-team tournament. Jessica Ip recorded the best finish for the Hawkeyes tallying a three-round 226 (+10), with rounds of 73, 73 and 80. She finished the competition tied for 12th.

PHILLIPS PUTS HER NAME IN RECORD BOOKS AGAIN:
Shelby Phillips became the latest name penciled into the Hawkeye record book with her third round efforts at the Mountain View Collegiate. The senior recorded a 68 (-4) in the final round in Tucson, putting her name in the Iowa record books, tying Kristi Cardwell, Tyrette Metzendorf and most recently Jessie Sindlinger for the second-lowest 18-hole score all-time.

MENZEL ON B1G CHAMPIONSHIPS:
” We are looking forward to this tournament. We have had some strong individual performances this season and I know this team feels as though they can put together three solid rounds and give themselves an opportunity to compete at the top of the conference. We might be a little nervous as we are a young team, but we are going to put a good game plan together. We are excited for this opportunity, ” said UI head coach Megan Menzel.