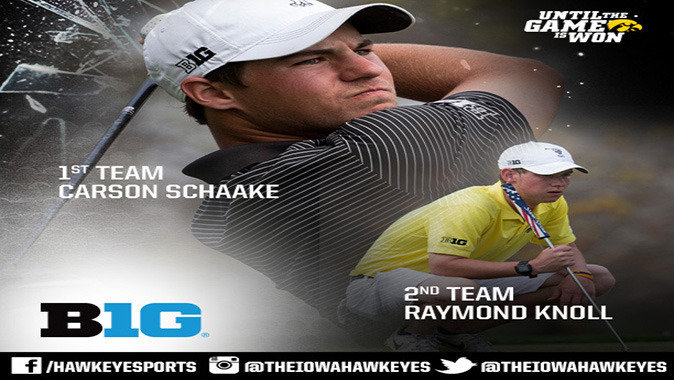 Schaake has been Iowa’s top performer in six of nine events this year and has finished in the top-five four different times. The Omaha, Nebraska, native was crowned co-champion at the 2015 Big Ten Tournament, his first collegiate individual title, while recording the best 72-hole score (284; -4) and best 18-hole score of his career with a seven-under-par 65. Schaake has played 27 rounds this year, averaging a team-best 71.37 strokes per round.

Knoll has been Iowa’s top individual finisher in two events this season, with his best performance coming at the Rod Myers Invitational, where he tied for 13th. Knoll has the second-lowest scoring average (72.63) of all Hawkeye golfers in addition to having the second-most top-20 finishes (six). The Naperville, Illinois, native carded the best 72-hole score of his career (299; +11) at the Big Ten Championships last weekend.

Bullington, who holds the fourth-best scoring average of all Iowa golfers (73.04), was Iowa’s top finisher at the Royal Oaks Intercollegiate this fall. He finished three strokes above par en route to an 11th-place finish, his best performance of the year. Bullington is tied with Knoll for the second-most rounds at or below par (nine) on the team.

Iowa, ranked 46th nationally, has advanced to NCAA competition in each of the last six seasons. This year’s selection show will air on Golf Channel on May 4 at 9 a.m. (CT). NCAA Regional competition will take place at six sites from May 14-16.