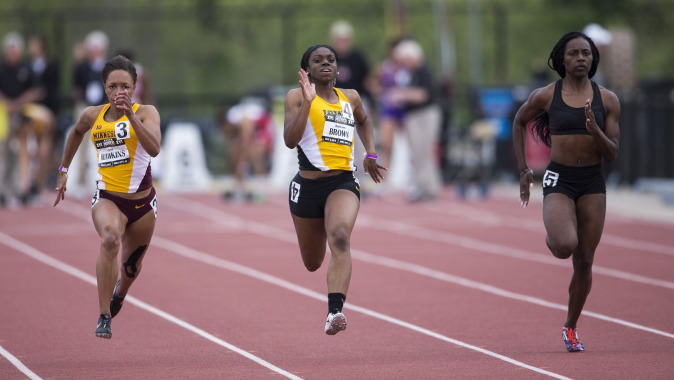 EAST LANSING, Mich. — The University of Iowa track and field team advanced ten individuals in 12 events to the finals, while senior Gabe Hull snatched silver on day two of the Big Ten Outdoor Championships on Saturday. After eight events scored, the men’s team is seventh (20 points), while the women are tied for ninth (11 points).

“Today went really well for both the men and women,” UI director of track and field Joey Woody said. “We got a lot of people through to the finals who we were expected to make it, and we also had some individuals in the field events who really stepped up today. For the men, it’s definitely one of the highlights since I’ve been at Iowa to see the number of qualifiers we had make it to the finals.”

Hull was the early point scorer for Iowa with a second-place finish (eight points) in the men’s discus throw. The Bloomington, Indiana, native recorded a season-best toss of 190-0.25 (57.91m).

The Hawkeyes received a pair of sixth-place finishes (six points total) in the long jump. Junior Klyvens Delaunay made his season debut in the men’s competition with a personal best 24-1.75 (7.36m), while freshman Jahisha Thomas (19-11.50, 6.08m) competed for the women.

“James really stepped up his game today,” Woody said. “We weren’t even sure if we were going to put him in the 100 until last week. We decided to put him the race because we thought he had a good chance to make the final, and now he put himself in a position to make the podium.”

“Brittany is looking as good as I’ve ever seen her,” Woody said. “Lake continues to do some amazing things this year. MonTayla is coming off a great race today, and Elexis won her heat in the 400. I think all of those girls are very confident going into the 4×100 tomorrow.”

“I’m excited about tomorrow,” Woody said. “We start things out with the 4×100. We are defending Big Ten champions, and are ranked pretty high for both the men and women. I’m really looking forward to some big things tomorrow. I feel positive about the direction that the team is moving as we head into the Big Ten finals.”

The Championships resume tomorrow at 10 a.m. (CT) at the Ralph Young Field on the campus of Michigan State University.