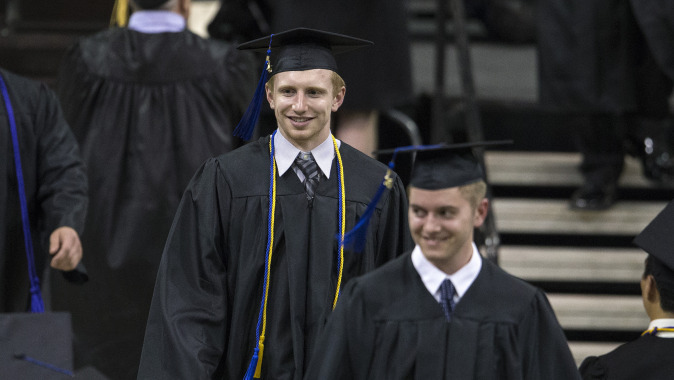 IOWA CITY, Iowa — Paced by three teams with perfect scores, all 24 of the University of Iowa’s intercollegiate athletics programs are achieving in the classroom at a rate that surpasses the national benchmark for success established by the NCAA.

According to an annual report released today, the NCAA’s Academic Progress Rate (APR) for the University of Iowa for 2014-15 revealed that – for the sixth consecutive year – all 24 of Iowa’s sports programs were above the threshold that signals a red flag with respect to a sport program’s academic progress.

The highlights of the results for the UI include:

“Once again student-athletes at the University of Iowa have demonstrated their commitment to the “Graduate” leg of our three-legged stool of Win. Graduate. Do it Right. I am particularly impressed with the four programs that achieved at a rate that put them among the top 10 percent of their peers,” said Gary Barta, the UI’s director of athletics.

“As always, I also want to take this opportunity to both thank and congratulate our coaching and support staffs in our athletics department, as well as all of our many partners across the UI campus. All of these individuals play an instrumental role in helping our student-athletes achieve success.”

The Academic Progress Rate measures eligibility and retention of student-athletes competing on every NCAA Division I sports team. This year’s APR scores are based on a multi-year rate that averages scores from the 2010-11, 2011-12, 2012-13, and 2013-14 academic years.

The goal of the NCAA’s academic performance program is improvement, not punishment. Not only does the program ensure accountability for student-athletes, teams, and institutions, but it also provides fairness by considering individual circumstances per team and school. This year marks the 11th year of APR data for most teams.

Today’s news complements the NCAA report on graduation rates of last October which revealed that, once again, student-athletes at the UI outperformed their peers nationally academically, while setting records for graduation success.

That mark was one point better than last year’s record-setting mark of 88 percent. According to the NCAA, the GSR for all NCAA Division I institutions was 82 percent.

Seven UI teams scored a perfect 100 on their GSR: Men’s basketball, field hockey, men’s golf, women’s golf, softball, men’s tennis, women’s tennis, and volleyball. All counted, the GSR for 18 of Iowa’s 24 teams was better than the national average among its peer sport group.

The NCAA introduced the GSR in 2005 to more accurately assess the academic success of student-athletes. Unlike the federal graduation rate, the GSR holds institutions accountable for transfer students. The GSR also accounts for mid-year enrollees and is calculated for every sport.