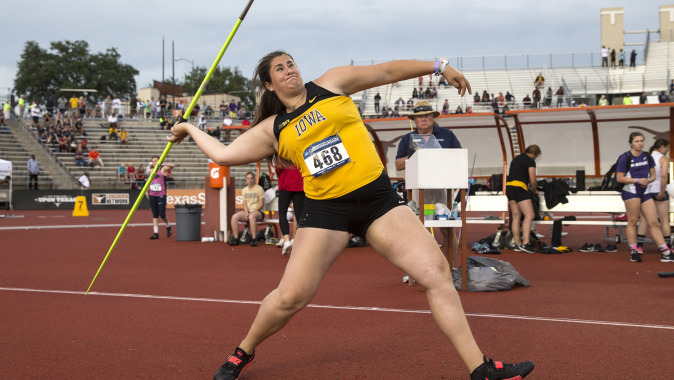 IOWA CITY, Iowa — University of Iowa freshman Kayla Hochhalter has the timing down. The challenge this offseason is raising the bar.

Hochhalter, a 2014 USATF junior national champion in the javelin, finished her rookie season with back- to-back personal bests.

Two championship events and two personal bests. That should leave a pretty good taste in your mouth, but this year the flavor was bittersweet.

Hochhalter placed ninth at the Big Ten Championships, one position shy of scoring a team point.

At the NCAA West Regional, her final throw was good enough to win the first flight. But by the end of the third flight, she sat in 13th place, one inch, or three centimeters, from qualifying for the NCAA Championship in Eugene, Oregon.

“I wish I was there, but I know I’ll get there eventually,” Hochhalter said. “It’s going to take a lot of work, but we’ll get there.”

Hochhalter put her money where her mouth is when she returned to campus. The Hawkeyes got home Sunday, and by Monday she was in the weight room.

“Right afterwards I said I have to get back and start working harder than I did this year,” she said. “So I’m going to put more time in the gym and weight room and throw more.”

Hochhalter said the transition to college from Carrington High School in Carrington, North Dakota, wasn’t as smooth as she had hoped. A state champion in discus and runner-up in the shot put, she shelved both events after the indoor season and focused exclusively on the javelin.

That in itself isn’t much of a change. In high school she would spend up to four hours throwing javelin. The difference this year is an increased focus, yet fewer throws.

“She and I took some time to figure each other out,” said UI assistant coach Andrew Dubs. “Javelin isn’t an event where you’re going to train with a high volume frequency, so there was a learning curve.”

Dubs and Hochhalter tapered her repetitions toward the end of the season, and the results speak for themselves.

“All the training led to peaking at the right time,” Hochhalter said. “It was a lot different training than I’m used to, but now that I’m used to it, I feel like we’re going to get a lot more accomplished next year.”

Dubs and Hochhalter agree the long term goals go beyond moving up one rung and scoring points at the Big Ten Championships. Hochhalter expects to be on the podium in 2016 and contend for a conference title.

In the short term, her focus is on hitting a PR for the third consecutive meet. She competes at the USATF Junior Outdoor Championships in Eugene, Oregon, on June 25-28.

“The NCAAs were a little disappointing, but it was a good end to my freshman season,” she said. “Now we’re going to see going into Junior Nationals if I can peak even more.”