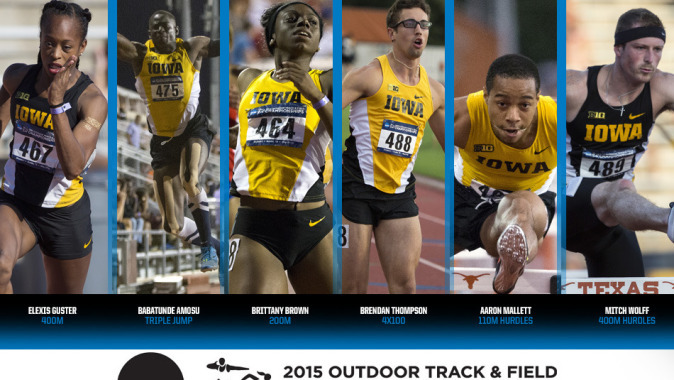 THIS WEEK
The University of Iowa track and field team travels to Eugene, Oregon, to compete at the 2015 NCAA Outdoor Track and Field Championships on June 10-13. Eight Hawkeyes advanced to the NCAA final site to compete in the championship field of 24. The championships are at Hayward Field on the campus of the University of Oregon and are set to begin Wednesday at 1:30 p.m. (CT) and conclude Saturday at 6:20 p.m.

ON YOUR TELEVISION/COMPUTER
ESPNU will provide live coverage beginning Wednesday at 6 p.m. (CT) and Thursday at 6 p.m. (CT). Coverage turns to ESPN Thursday at 7:30 p.m. Friday’s coverage begins at 6:30 p.m. on ESPN, and Saturday’s coverage begins at 4 p.m. on ESPN2. ESPN3 will provide live field event coverage. The Championships’ first-ever ESPN and ESPN2 primetime broadcasts on Friday and Saturday were announced as part of network’s 12-hour live television programming schedule for all four days of the meet.

HAWKEYE QUALIFIERS
The Iowa women are represented by Brittany Brown and Elexis Guster. Brown advanced in the 200 meters for the second year in a row, and Guster is making her first finals appearance in the 400 meters. The Hawkeye men qualified three student-athletes in individual events and advanced the men’s 400-meter relay. Babatunde Amosu returns in the triple jump after placing 13th at nationals last season. Aaron Mallett, a 2015 indoor All-American (60m hurdles), is making his fist appearance at the NCAA final site in the 110-meter hurdles. Mitch Wolff grabbed the final qualifying spot in the 400-meter hurdles at the NCAA West Regional and is making his debut at the NCAA final site. The men’s 400-meter relay returns following a sixth-place finish last season. Keith Brown returns as the anchor. Vinnie Saucer, Jr., is the new leadoff. Mallett runs the second leg, and the third leg will be carried by James Harrington or Brendan Thompson. Harrington is an All-American from 2014.

Babatunde Amosu — TRIPLE JUMP
Senior Babatunde Amosu enters the final site as the 16th seed after placing eighth in the triple jump with a mark of 51-5 1/2 (15.68m) at the NCAA West Regional. Amosu won the Big Ten indoor and outdoor championships this season, and was a second team indoor All-American. His personal best (53-10, 16.15m) ranks No. 2 in school history, and his season best (53-0; 16.15m) ties for the 12 best in the nation. Amosu is making his second appearance at the NCAA finals. He placed 13th in 2014 to earn second team All-America honors.

Aaron Mallett — 110m HURDLES
Sophomore Aaron Mallett placed third at the NCAA West Regional to advance to the NCAA semifinals for the first time in his career. He finished the 110-meter hurdles in 13.64 and is the No. 3 seed in Eugene. Mallet’s personal best 13.43 is the second fastest time in the country. He hit that PR and set a new school record on his way to the 2015 Big Ten championship. Mallett earned All-America honors in the 60-meter hurdles at the 2015 NCAA Indoor Championships.

Elexis Guster — 400 METERS
Sophomore Elexis Guster is making her first NCAA semifinal appearance in the 400 meters. She placed eighth at the NCAA West Regional in 52.30 and is seeded 15th at the NCAA Championships. Guster is a two-time reigning Big Ten Champion in the 400 meters, finishing with a personal best 52.19 at the 2015 conference meet. That time ranks third in school history, and 19th in the NCAA. She is the first Hawkeye to advance to the NCAA final site in the 400 meters since Kineke Alexander in 2008. Alexander won the national title in 2006.

Mitch Wolff — 400m HURDLES
Junior Mitch Wolff ran 51.10 at the NCAA West Regional to grab the 12th and final bid to the NCAA Championships. Wolff’s qualifying time is a personal best and ranks 10th in school history. Wolff is the No. 23 seed in Eugene, and his appearance marks the sixth time in seven years Iowa is represented in the 400-meter hurdles at the NCAA Championships. All-American Ray Varner qualified for the final site from 2009-10, and All-American Ethan Holmes represented Iowa from 2011-13.

MEN’S 4X100
The men’s 400-meter relay team of Vinnie Saucer, Jr., Aaron Mallett, Brendan Thompson, and Keith Brown is seeded 18th following a ninth-place finish (39.77) at the NCAA West Regional. The 400-meter relay is making its third straight appearance at the NCAA Championships. Brown anchored the 2014 team to a sixth place finish and first team All-America honors. James Harrington, who ran the third leg on Iowa’s top 400-relay this season (39.66), also ran the third leg on the 2014 All-America squad. Harrington battled injury at the NCAA West Regional, but is expected to be healthy enough to run in Eugene. He leads the team in the 100 meters this year, racing 10.26 at the Big Ten Championships. Saucer and Mallett are new to this year’s relay. Saucer is a Big Ten runner-up in the 100 meters. Mallett is one of the nation’s top competitors in the 110-meter hurdles. He is the only Hawkeye competing in two events at the NCAA Championships.