Mims Turns Over the Reigns

IOWA CITY, Iowa — As a catcher in Major League Baseball, Jim Sundberg made more than 1,000 assists. His father, Howard, had one big assist that impacted the University of Iowa for nearly four decades.

A native of Galesburg, Illinois, Jim Sundberg starred at the University of Iowa from 1970-72 before playing 16 years in the majors. His father convinced another Galesburg native, Fred Mims, that becoming a Hawkeye was the road to travel.

Mims, 65, will retire June 30 after 38 years as a student-athlete and staff member at the UI. 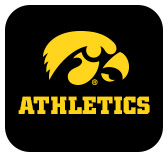 “Through the conversation between Jim Sundberg’s dad and my mother, they convinced me to come to the University of Iowa,” Mims said. “I was going to Jacksonville, Florida, to play basketball and baseball and then they talked me into coming here. The Sunday before the opening day of class I came to Iowa City — I had never been here before — and went to Hillcrest (Hall) where I had a room set up for me. The next day I was an Iowa student and I learned the campus as I was going to classes.”

Mims spent two years at Spoon River Junior College in Canton, Illinois, then earned a letter for the UI men’s basketball team in 1972 and for the baseball team in 1971 and 1972. The 1972 Hawkeyes are the only baseball team in school history to advance to the College World Series. In two seasons, Mims played in 83 games and batted .335 with 15 home runs, 61 RBIs and 18 stolen bases. Twice he was named All-Big Ten Conference.

A knee injury that required four surgeries ended Mims’ professional baseball career after 231 games in the Houston Astros organization. He played the 1973 and 1974 seasons in Cedar Rapids and batted .270 with 18 home runs and 94 RBIs.

“Professional baseball was something I loved to play and I was pretty good at it, I had some good statistics,” Mims said. “I did well, but injuries took their toll on me.”

Mims received a bachelor’s degree in English from the UI after his first fall of professional ball in the Florida East Coast League. He enrolled in graduate courses, and when his playing days ended, Mims returned to the UI and wore many hats since:

“You name it, I have been out there,” Mims said. “The service element in me comes from my parents that did a lot of that and I saw it when I was growing up.”

“The friendships and relationships I have made are the best thing for me,” Mims said. “You realize that you have had an effect on hundreds of student’s lives. You don’t think about it when you go through it, but since I announced my retirement, there have been so many emails, cards, and letters that come in that you have touched people over 38 years. That’s what is important. It wasn’t about me, money, or anything other than helping and serving other people.”

Mims met his wife Susan when they were students at the UI. Susan was a middle distance/distance runner for the Hawkeyes. They have four children — Jeremy, Corey, Monica, and Kelsey — and all four received Division I scholarships in track. Monica and Kelsey competed for the Hawkeyes.

While the Mims children followed their mother’s athletic sport of choice, Monica, like her father, is employed in the UI athletics department as associate director of compliance.

“One of the proudest moments of my life was being in the room when (Monica) was doing her interview and answering questions from the audience,” Mims said. “She was so poised, articulate, and endearing that it made me feel very, very proud.

“With Monica coming in and watching her interview, it warmed my heart and I know I can leave and have someone carrying on the legacy of being here in the athletics department.”

When it comes to working for the Hawkeye athletics department, Mims will miss plenty.

“Not being around the people you admire and work well with,” Mims said. “Not being at the table to talk about important decisions to be made and the direction of the program as well as services to our students; those things I will miss greatly. My hope is that what we have been able to establish here will be long-standing and still service the student population.”

Mims won’t be a stranger around the UI, but he won’t look over anyone’s shoulder, either.