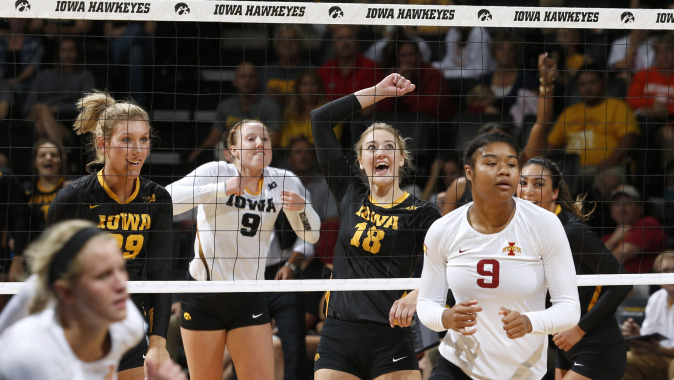 IOWA CITY, Iowa — When Bond Shymansky was hired as head volleyball coach at the University of Iowa on Jan. 31, 2014, he wanted his program to become the No. 1 choice among in-state talent while building an NCAA Tournament resume.

The Hawkeyes took a step toward accomplishing both goals by winning the championship of the Comfort Suites Challenge on Sept. 11-12 in Carver-Hawkeye Arena. Iowa went 3-0 on the weekend with wins against Milwaukee (3-0), Iowa State (3-1), and No. 25 Texas A&M (3-1).

It is the first time Iowa has defeated the Cyclones since 1997.

“We have great (high school) talent in the state of Iowa and we want them to come here and think about Iowa first,” Shymansky said. “In order for us to be a legitimate part of that conversation with recruits we need to win and we need to be able to show we are capable of winning at the highest level.”

If the victory against Iowa State wasn’t enough, the Hawkeyes knocked off nationally ranked Texas A&M the following evening. Shymansky has loaded Iowa’s nonconference schedule with programs that boost the Hawkeye Rating Percentage Index, including a trip to Hawaii from Sept. 5-6 where they took on the host No. 17 Rainbow Wahine and No. 25 UCLA.

“It gave us confidence to know we were going to do well in the next moment, which was not only Iowa State, but a top 25 team in Texas A&M,” Shymansky said. “For us to back up the Iowa State win with another big win against Texas A&M was impressive.”

During the undefeated weekend run, junior Lauren Brobst collected 45 kills, followed by sophomore Jess Janota with 41. Junior Loxley Keala was named Big Ten Conference Setter of the Week after handing out 154 assists (14 per set). Senior Mikaela Gunderson had 13 blocks. Janota was named tournament Most Valuable Performer; she was joined on the all-tournament team by Brobst and Gunderson.

“That is rewarding for us as a coaching staff to know we can continue to see roles and opportunities for everybody on our team and then expect them to fulfill it when the moment comes,” Shymansky said. “Success abounds right now for all players in our program.”

Equally impressive was the atmosphere inside Carver-Hawkeye Arena, where winning is now an expectation. Shymansky is inspired by the home game day environments created by the UI wrestling and women’s basketball teams and he wants his program to appreciate that feeling.

“It is amazing what a rocking pep band and the spirit squad does,” Shymansky said. “Then you add a few thousand people and they bring a few thousand friends…

“We understand you can’t put the cart before the horse. We have to win for people to come out and support us more. Now we are doing exactly what we intended to do, which is win, beat quality teams, and be a contender in the Big Ten. We’re hoping people will step forward and be part of our environment.”

The Hawkeyes (6-3) host the Holiday Inn Hawkeye Challenge on Friday and Saturday. The tournament includes Gardner-Webb, Coastal Carolina, and Drake. The next home event will be Wednesday, Sept. 23, against Nebraska in the team’s Big Ten Conference opener.