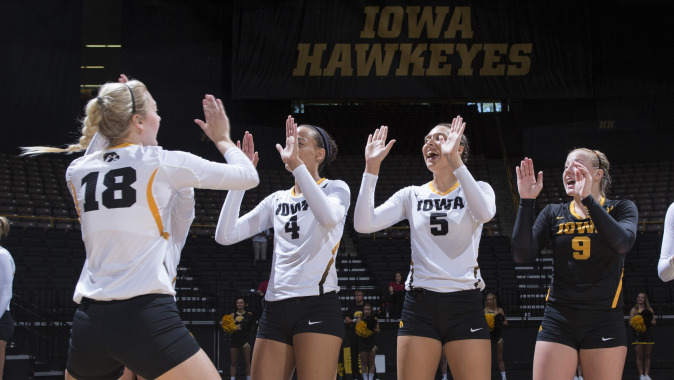 THIS WEEK
The University of Iowa volleyball team continues its home stand hosting the Holiday Inn Hawkeye Challenge, on Sept. 18-19. The Hawkeyes face Gardner Webb on Friday at 11 a.m. (CT) before taking on Coastal Carolina at 7 p.m. Iowa and Coastal Carolina will square off again on Saturday at 11:30 a.m., and the Hawkeyes conclude weekend action against Drake at 3:30 p.m.

PROMOTIONS
? The first 750 fans at Iowa’s match against Coastal Carolina on Sept. 18 will receive a free Iowa volleyball mouse pad.
? Admission is free to both of Iowa’s matches on Saturday.

PARKING
? Friday, Sept. 18 — Iowa vs. Gardner-Webb (11 a.m. CT): Fans can park in the Lot 46 meters, the Newton Road parking ramp, or the softball parking lot
? Friday, Sept. 18 — Iowa vs. Coastal Carolina (7 p.m. CT) : Fans can park in Lot 46 and Lot 75
? Saturday, Sept. 19 — Iowa vs. Coastal Carolina/Drake (11 a.m./3:30 p.m.): Fans can park in the Hawkeye Commuter lot located off of Melrose Avenue. A continuous shuttle bus will run from the Hawkeye Commuter lot to the Cambus stop located outside of the South Entrance of Carver-Hawkeye Arena on Elliott Drive from 8 a.m. to 7 p.m. Fans attending both volleyball and football events will have access to the football shuttle back to the Hawkeye Commuter lot following the football game.

FOUR-STRAIGHT
The Hawkeyes are riding a four-match win streak. The Hawkeyes defeated American, 3-1, at the Hawaiian Airlines Wahine Volleyball Classic on Sept. 6. The following weekend (Sept. 11-12), the Hawkeyes went 3-0 in Comfort Suites Challenge action with wins over Milwaukee (3-0), Iowa State (3-1), and No. 25 Texas A&M (3-1).

NATIONAL CHATTER
Following back-to-back wins against Iowa State and No. 25 Texas A&M, the Hawkeyes are gaining national attention. Iowa is receiving 21 votes in the most recent American Volleyball Coaches Association (AVCA) Top 25 Poll, released on Sept. 14. Fourteen of Iowa’s 2015 opponents also appear in the poll. No. 1 Penn State, No. 4 Nebraska, No. 6 Illinois, No. 11 Wisconsin, No. 12 Hawai’i, No. 13 Ohio State, No. 13 Ohio State, No. 14 UCLA, No. 20 Michigan, No. 22 Purdue, No. 23 Minnesota, T-No. 24 Pacific are all ranked within the top 25, while Iowa State, Michigan State, and Texas A&M are all receiving votes.

B1G SETTER OF THE WEEK
University of Iowa junior Loxley Keala was named Big Ten Conference Setter of the Week for her performance in the Comfort Suites Challenge on Sept. 11-12. It is the first honor of Keala’s career. The Kaneohe, Hawaii, native is the first Hawkeye to earn a Big Ten weekly award since Bethany Yeager was named defensive player of the week on Sept. 2, 2013. Keala is the first Hawkeye in program history to win a weekly setter award.

Keala posted 40-plus assists in all three matches last weekend, including a career-high 57 against No. 25 Texas A&M. She led the offense tp back-to-back matches with a .300 or better attack percentage, including a season-high .379 against Iowa State and .303 versus Texas A&M. Keala tallied 154 assists and averaged 14 assists per set on the weekend.

COMFORT SUITES CHALLENGE ALL-TOURNAMENT TEAM
Jess Janota was named tournament MVP following the Comfort Suites Challenge on Sept. 11-12. The sophomore finished the weekend with 41 kills, including a career-high 20 against Iowa State. Senior Mikaela Gunderson and junior Lauren Brobst were both named to the all-tournament team. Brobst paced the team with 45 kills on the weekend, while Gunderson posted a .459 attack percentage and 30 kills.

DOWN GOES NO. 25
The Hawkeyes notched their first win over a ranked opponent on Sept. 12. Iowa’s 3-1 victory over No. 25 Texas A&M marked the first ranked win for the Hawkeyes since defeating No. 12 Purdue, 3-1, on Nov. 8, 2014. Junior Loxley Keala led the Hawkeye offense with a career-high 57 assists, while junior Lauren Brobst paced the team in kills (17), and freshman Reagan Davey and senior Mikaela Gunderson each added four blocks.

HAWKEYES DOWN CYCLONES IN HISTORIC FASHION
In front of the fifth largest crowd in program history, the University of Iowa volleyball team trumped the Cyclones, 3-1, for the first time since Sept. 13, 1997. The Hawkeyes used a .379 attack percentage and a season-high 66 kills to defeat Iowa State in four sets. Sophomore Jess Janota paced the Hawkeye offense with a career-high 20 kills, while freshman Libby Koukol led the team with a career-high 18 digs.

QUICK HITTERS
? Jess Janota recorded a career-high 20 kills against Iowa State on Sept. 11. The sophomore only recorded one error in the contest, and finished the match with a.514 attack percentage.
? Loxley Keala dished out 50 or more assists in back-to-back matches last weekend. The junior recorded 55 assists against Iowa State on Sept. 11, before posting a career-high 57 against No. 25 Texas A&M on Sept. 12.
? Reagan Davey has set career highs in kills in three-straight matches. The freshman recorded seven kills against Milwaukee (9/11), 10 against Iowa State (9/11), and 13 against No. 25 Texas A&M (9/12).
? Libby Koukol was a pivotal part of Iowa’s 3-1 win over Iowa State on Sept. 11. The freshman recorded a career-high 18 digs in the match.
? Lauren Brobst was named to the all-tournament team in all of Iowa’s tournaments so this season (NIU Invite, Hawaiian Airlines Wahine Volleyball Classic, Comfort Suites Challenge).

BIG TEN NETWORK COVERAGE
The University of Iowa volleyball team competes live on the Big Ten Network (BTN) or BTN Plus 16 times this season. The Hawkeyes’ match against Wisconsin on Oct. 23 in Iowa City will be televised live on BTN. First serve is set for 7 p.m. (CT). Fifteen Iowa matches will be shown via live stream online through BTN Plus. To see if your cable package gives you access to BTN Plus content, sign up for BTN Plus or learn more about it, visit btn2go.com.

ON THE RADIO
Twelve of Iowa’s 20 Big Ten Conference matches will air live on KXIC Radio this season. The first broadcast of the season is on Sept. 26 beginning at Nebraska at 7 p.m. (CT). Second-year play-by-play announcer Tim Keating will call the action. Audio for all of Iowa’s home and away matches is available online as part of the premium content package on Hawkeye All-Access at hawkeyesports.com.

ON DECK
The Hawkeyes open Big Ten Conference action at home against Nebraska on Sept. 23. First serve is set for 7 p.m. (CT) in Carver-Hawkeye Arena.