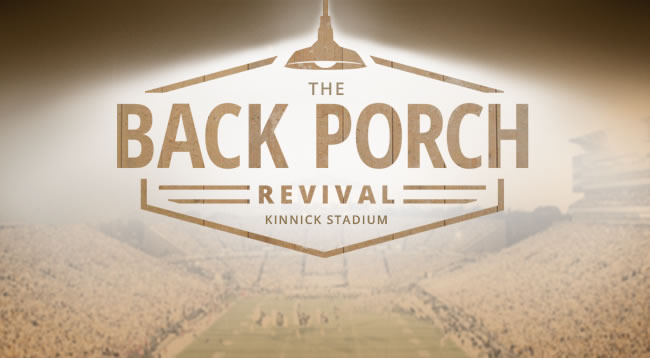 IOWA CITY, Iowa History will be made on August 27, 2016, when Kinnick Stadium will host a concert for the first time. The Back Porch Revival at Kinnick Stadium concert will feature Blake Shelton as the headliner and a line-up of country music all-stars to benefit the Native Fund, a new non-profit organization.

An announcement was made during the University of Iowa football game Saturday by Iowa Hawkeye and former Indianapolis Colt, Dallas Clark, who also plays a key role in the event.

“I’ve had this idea for a long time and coincidently this year, I was making connections with people who could make it happen and, as the pieces started coming together I knew the time was right,” said Clark. “There are many different elements to the Back Porch Revival and everyone involved is giving 100 percent to ensure its success.”

This is the announcement that played on HawkVision during the Iowa-North Texas football game:

Hey Hawk fans! Last weekend, right before the best 57 yard field goal I’ve ever seen…….I told you about the 1st ever concert coming to Kinnick! Are you ready to hear more? Mark your calendars for August 27th, 2016. It’s the weekend right before the 1st home game next year and the best kickoff party ever – The Back Porch at Kinnick Stadium. The lineup is going to be amazing and the headliner is … Blake Shelton. Get your tickets on October 7th – season ticket holders get a two-day presale. All proceeds go to the Native Fund, an organization friends and I started for Iowans helping Iowans. Come out to the Back Porch and be a part of history.

Blake Shelton will headline The Back Porch Revival at Kinnick Stadium which will also feature other top country talent including David Ray, Morgan Frazier and Tucker Beathard (who is the brother of Hawkeye QB CJ Beathard) — other artists will be confirmed throughout the year. The event is being produced by Forest City’s Basis Entertainment which also produces the Tree Town Festival.

“There is no shortage of state pride in Iowa,” said Gary Dewaard, president and CEO of Basis Entertainment. “Those attending The Back Porch Revival at Kinnick Stadium will see top-notch entertainment and be contributing to a great cause, the people of Iowa.”

There were several logistical issues to overcome at Kinnick Stadium in order to host a concert.

“Events at the Stadium are limited because the field access points aren’t large enough to accommodate some of the very large equipment and speakers used for concerts of this size,” said Mark Jennings, Associate Athletic Director at the University of Iowa who orchestrated through the issues during the planning stages. “For The Back Porch Revival at Kinnick Stadium, much of the equipment will be craned in to the Stadium to create this historical Iowa first.”

All of the proceeds from the Back Porch Revival will benefit the Native Fund, a new non-profit organization of “Iowans helping Iowans” formed by Clark and backed by Board of Directors and native Iowan’s, Ashton Kutcher and Zach Johnson. The Native Fund is a 501(c)3 established this year by Clark to as a means of providing assistance to Iowa’s citizens affected by catastrophes such as floods and tornados, and serving youth and veterans in need.

Social media channels for The Back Porch Revival at Kinnick Stadium launched last weekend after Clark delivered a teaser promotion during the Hawkeye football game against Pittsburgh. Since then Twitter and Facebook followers have seen numerous intriguing notifications of a big event happening at Kinnick Stadium prompting many retweets, likes and comments. The social sites will continue to post news of the event, ticket sales and talent confirmations.

Tickets for the Back Porch officially will go on sale Oct. 7, 2015, at 10 a.m. via TheBackPorchRevival.com. After accommodating the staging area, there will be approximately 56,000 seats available and ticket prices will start at $39. A preview sale to UI football season ticket holders will begin on Oct. 5 for a maximum of four tickets and two parking spaces per order.