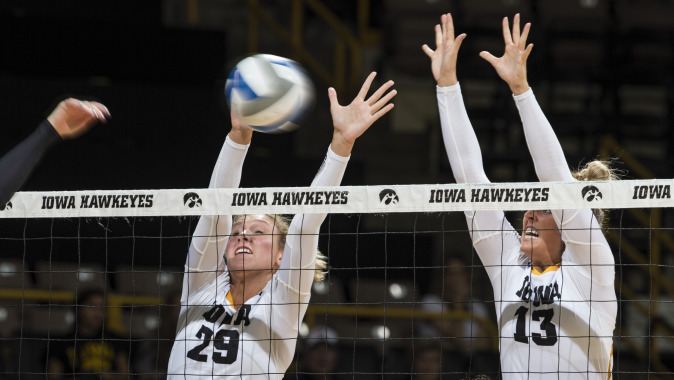 COLUMBUS, Ohio — The University of Iowa volleyball team fell to No. 13 Ohio State, 3-1, Friday night at St. John Arena. With the loss, the Hawkeyes drop to 10-6 on the season and 0-3 in conference action, while the nationally ranked Buckeyes improve to 13-2 overall and 2-1 in Big Ten play.

“I was proud of our group for coming back after the 10 minute break and really putting on a great exhibition in the third set,” said UI head coach Bond Shymansky. “We were sharp, we were motivated, and we didn’t quit. Those are the kinds of things we need to have out of our team the whole way through the match.”

The Buckeyes got out to an early 6-2 lead before the Hawkeyes started to rally. Iowa used kills by senior Mikaela Gunderson (3) and junior Ashley Mariani (2) to eventually tie the set, 10-10. Ohio State answered with a 3-0 run to force the Iowa timeout. Iowa fought back to pull within one, but could not take the lead as Ohio State took the set, 25-22.

Ohio State established an early lead in the second set and never looked back. The Buckeyes posted .400 attack percentage to win the set, 25-19, and take a 2-0 lead in the match.

The Hawkeyes came out swinging in the third set, using a 5-0 run to establish a 7-2 lead. They never lost it from there, winning the set 25-18. Junior Lauren Brobst and sophomore Jess Janota led the way with three kills apiece, while Gunderson and freshman Reagan Davey each added two. The Hawkeyes posted a .250 attack percentage in the set and held the Buckeyes to .171.

After trading points early, the Buckeyes used a four-point swing to get out to a 7-3 lead. They controlled the momentum from there to ultimately win the set, 25-11. The Ohio State block proved to be a challenge for the Hawkeyes. The Buckeyes posted eight team blocks in the final set to secure the 3-1 match win.

Gunderson led the offense with 10 kills, while junior Loxley Keala dished out 35 assists. Sophomore Annika Olsen posted a team-high 20 digs, and Gunderson led the team in blocks with three.

“This is the Big Ten, and this is the slugfest that you get into,” said Shymansky. “I’m glad that we found a way to take the third set. I know we will be excited to see them when they come back to Carver in about a month. We have to play way more focused volleyball for the entire match in order to beat teams like this.”

Iowa continues Big Ten play tomorrow when it travels to No. 1 Penn State. First serve is set for 6 p.m. (CT) at Rec Hall in University Park, Pennsylvania. The match will be streamed live online via BTN Plus.