Hawkeyes Set for 2 Matches in Illinois 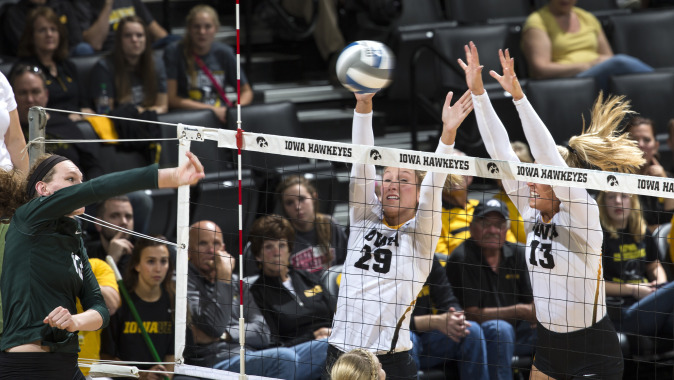 THIS WEEK
The University of Iowa volleyball team travels to Illinois for a pair of Big Ten contests this weekend. The Hawkeyes face No. 16 Illinois in Champaign, Illinois, on Friday, Oct. 16, before traveling to Evanston, Illinois, for a contest against Northwestern on Sunday, Oct. 18.

WATCH
Both contests will be streamed live online via BTN Plus. To see if your cable package gives you access to BTN Plus content, sign up for BTN Plus or learn more about it, visit btn2go.com.

ALUMNI MATCH
The 2015 Iowa volleyball alumni match is set for Saturday, Nov. 21, when the Hawkeyes host Northwestern at 7 p.m. (CT). For more information and to RSVP to the event, contact Bre Payton at breann-payton@iowavolleyball.com.

ALL-TIME SERIES – NORTHWESTERN
• Northwestern leads Iowa, 40-27-1, all-time.
• In 2014, the Hawkeyes split a pair of contests with the Wildcats. Iowa won the first meeting, 3-2, in Iowa City, Iowa, on Oct. 18, before Northwestern defeated the Hawkeyes in straight sets in Evanston, Illinois, on Nov. 22.

STRENGTH OF SCHEDULE
According to the NCAA, the Hawkeyes have the seventh-strongest strength of schedule in Division I Volleyball — the highest ranking among Big Ten opponents. Wisconsin (8th) and Northwestern (9th) also made the top 10. Iowa currently owns a team RPI of 40.

A CAREER NIGHT
• Freshman Reagan Davey posted career highs in kills (21), total attempts (45), digs (12), and blocks (3) against No. 24 Michigan on Oct. 7.
• Sophomore Jess Janota recorded a career-high six blocks in the contest.
• Junior Loxley Keala dished out a career-high 64 assists against the Wolverines — the highest single-match assist total in the Big Ten this season.

1G SETTER OF THE WEEK
University of Iowa junior Loxley Keala was named Big Ten Conference Setter of the Week for her performance at the Comfort Suites Challenge on Sept. 11-12. It is the first conference honor of Keala’s career. The Kaneohe, Hawaii, native is the first Hawkeye to earn a Big Ten weekly award since Bethany Yeager was named defensive player of the week on Sept. 2, 2013. Keala is the first Hawkeye in program history to win a weekly setter award.

ON THE RADIO
Ten of Iowa’s 20 Big Ten Conference matches will air live on KXIC Radio this season. The first broadcast of the season is on Oct. 16 when the Hawkeyes face Illinois at 7 p.m. (CT). Second-year play-by-play announcer Tim Keating will call the action. Audio for all of Iowa’s home and away matches is available online as part of the premium content package on Hawkeye All-Access at hawkeyesports.com.

UP NEXT
The Hawkeyes return to Carver-Hawkeye Arena on Friday, Oct. 23, hosting the Badgers at 7 p.m. (CT). The game will be shown live on BTN.