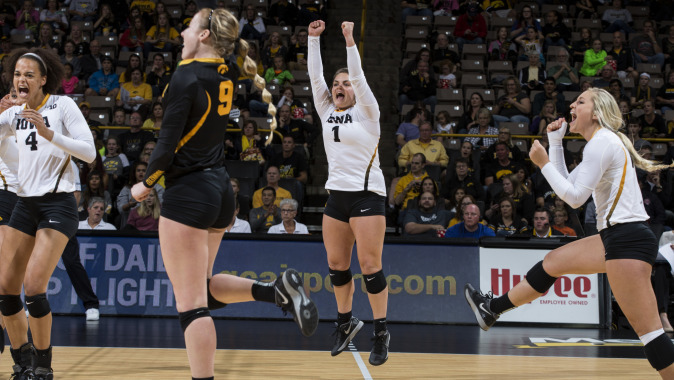 THIS WEEK
The University of Iowa volleyball team travels West Lafayette, Indiana, for a contest against No. 16 Purdue on Saturday, Nov. 7. First serve is set for 6 p.m. (CT)

WATCH
Saturday’s contest will be streamed live online via BTN Plus. To see if your cable package gives you access to BTN Plus content, sign up for BTN Plus or learn more about it, visit btn2go.com.

APPROACHING A MILESTONE
Loxley Keala has 997 career assists (at Iowa) — three assists away from 1,000. Her 997 assists currently rank 10th on Iowa’s all-time list. Keala has started every match and every set as Iowa’s setter this season. The Kaneohe, Hawaii, native has registered 50 or more assists six times this season, including a career-high 64 against Michigan on Oct. 7.

ON THE RADIO
Ten of Iowa’s 20 Big Ten Conference matches will air live on KXIC Radio this season. Second-year play-by-play announcer Tim Keating will call the action. Audio for all of Iowa’s home and away matches is available online as part of the premium content package on Hawkeye All-Access at hawkeyesports.com.

UP NEXT
The Hawkeyes return to Carver-Hawkeye Arena on Wednesday, Nov. 11, hosting No. 1 Penn State at 7 p.m. (CT).