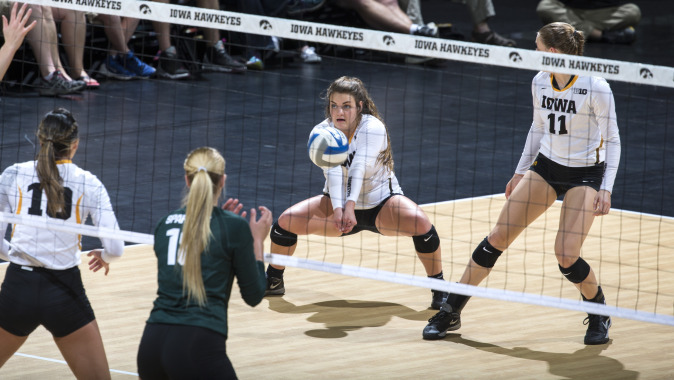 THIS WEEK
The University of Iowa volleyball team returns to Carver-Hawkeye Arena for a Big Ten match against No. 1 Penn State on Wednesday, Nov. 11. First serve is set for 7 p.m. (CT).

WATCH
Wednesday’s contest will be streamed live online via BTN Plus. To see if your cable package gives you access to BTN Plus content, sign up for BTN Plus or learn more about it, visit btn2go.com.

B1G VOLLEYBALL EXTRAVAGANZA
BTN will debut a unique look at the country’s premier volleyball conference Wednesday. The B1G Volleyball Extravaganza, beginning at 6 p.m. (CT), features live look-ins at all 14 Big Ten volleyball teams playing in seven conference matches throughout the evening. The event will be hosted by BTN’s Mike Wolf, who will provide direction from the studio while helping viewers navigate the evening’s slate. For more information, visit btn.com.

FOLLOW ALONG
Live stats are also available for Wednesday’s contest. Links can be found on the volleyball schedule page at hawkeyesports.com.

Former players who RSVP by Thursday, Nov. 12, will receive free admission to the match as well as a link to purchase tickets for the Iowa football game against Purdue on Nov. 21 (Kickoff TBA). To receive more information and to RSVP, contact Bre Payton at breann-payton@iowavolleyball.com.

STRENGTH OF SCHEDULE
According to the NCAA, the Hawkeyes have the sixth-strongest strength of schedule in Division I Volleyball — the third highest ranking among Big Ten opponents. Northwestern (3rd), Wisconsin (5th), Minnesota (7th), Ohio State (9th), and Illinois (14th) also made the top 15.

KEALA MAKES HISTORY
Loxley Keala recorded her 1,000th assist against Purdue on Nov. 7. The junior’s 1,052 assists rank ninth on Iowa’s all-time career assists list. Janet Moylan (1987-90) holds the school record with 5,471 career assists. Keala has started every match and every set as Iowa’s setter this season. The Kaneohe, Hawaii, native has registered 50 or more assists seven times this season, including a career-high 64 against Michigan on Oct. 7.

STUDENT-ATHLETE OF THE MONTH
Sophomore Annika Olsen along with Desmond King (football) and Madison Waymire (cross country) were named October student-athletes of the month Monday. The award honors University of Iowa student-athletes who display excellence in athletics, academics, and community service, as voted on by their peers. Olsen led the team with a 5.23 digs per set average during the month of October. The Johns Creek, Georgia, native currently leads the Big Ten with 4.94 digs per set in conference matches. She reached double digits in all 10 October matches, including a career-high 26 in Iowa’s win over Rutgers on Oct. 31.

QUICK HITTERS
• Loxley Keala registered her fourth double-double of the season against Purdue on Nov. 7. The registered 55 assists and 12 digs in the contest. Keala has also recorded double-doubles against Maryland (50 assists, 13 digs), Hawaii (26 assists, 13 digs), and American (46 assists, 13 digs).
• Freshman Reghan Coyle started the first two matches of her career last week against Indiana and Purdue. In two matches, Coyle registered 12 kills, 10 digs and a pair of aces.
• In two matches last week (Indiana, Purdue), sophomore Jess Janota led the team with 30 kills and a .442 attack percentage. Janota registered 19 kills against Purdue on Nov. 7 — just one kill from tying her career-high of 20 (Iowa State, 9/11).

IN THE BIG TEN – INDIVIDUAL RANKINGS
• Sophomore Annika Olsen leads the Big Ten in total digs (460) and digs per set average (4.84).
• Junior Loxley Keala leads the conference in total assists (1,052).
• Keala has the fifth-best assist per set average in the Big Ten (11.07).
• Senior Mikaela Gunderson owns the eighth-highest hitting percentage in the conference (.341).

UP NEXT
The Hawkeyes travel to Madison, Wisconsin, for a contest against the Badgers on Nov. 14. First serve is set for 7 p.m. (CT).