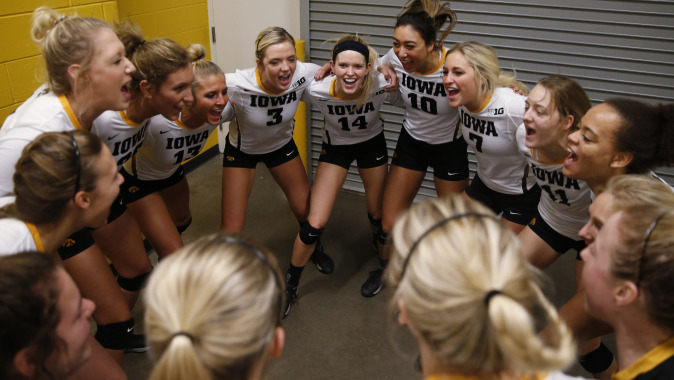 SEASON SUMMARY
The University of Iowa volleyball team ended the 2015 season with a 12-21 overall record and a 2-18 mark in Big Ten play under second-year head coach Bond Shymansky.

DOWN GOES NO. 25
Iowa’s 3-1 victory over No. 25 Texas A&M on Sept. 12 marked the first ranked win for the Hawkeyes since defeating No. 12 Purdue, 3-1, on Nov. 8, 2014. Junior Loxley Keala led the Hawkeye offense with 57 assists, while junior Lauren Brobst paced the team in kills (17). Freshman Reagan Davey and senior Mikaela Gunderson each contributed four blocks.

NONCONFERENCE SUCCESS
The Hawkeyes compiled a 10-3 record in nonconference action this season, marking the best overall start for the program since going 11-1 in 2006. Two of Iowa’s three loses were against ranked opponents (No. 17 Hawaii and No. 25 UCLA). The nonconference season included wins over South Dakota State, Pacific, American, Milwaukee, Iowa State, No. 25 Texas A&M, Gardner Webb, Coastal Carolina (2x), and Drake.

THE PREMIER CONFERENCE
The Big Ten Conference has had an NCAA Champion in eight of the last 12 years. Nine teams — Michigan State, Ohio State, Nebraska, Minnesota, Illinois, Penn State, Wisconsin, Michigan and Purdue — appeared in the 2015 NCAA Tournament with Nebraska winning their fourth national title. The title marked the third straight for the Big Ten Conference.

Nine Big Ten volleyball teams were ranked or receiving votes in the final AVCA Division I Coaches poll, released on Dec. 21. NCAA Champion Nebraska topped the poll at No. 1, followed by Big Ten Champion Minnesota at No. 3. Penn State checked in at No. 9, followed by No. 10 Wisconsin, No. 13 Ohio State, No. 15 Illinois, No. 17 Purdue, and No. 24 Michigan. Michigan State received 32 votes in the final poll.

GUNDERSON MAKES HISTORY
Senior Mikaela Gunderson made history in her final match as a Hawkeye on Nov. 28, breaking Iowa’s career attack percentage record with a mark of .294 — 16 points higher than the previous school record of .278 (Alessandra Dietz, 2014). In 64 matches and 220 sets for the Hawkeyes, Gunderson compiled 339 kills in 810 attempts with just 101 errors. The Casco, Wisconsin, native registered 193 blocks (16 solo, 177 assists) in her career, and holds the record for blocks in a four-set match (nine versus Texas-San Antonio on Sept. 29, 2014).

SERVE IT UP
Junior Ashley Mariani served up a team-leading 32 aces this season. Her 0.28 service aces per set average led the team and ranked 10th in the Big Ten. Freshman Molly Kelly and junior Loxley Keala added 22 aces a piece. The Hawkeyes registered 134 aces on the season — the fourth highest total in the Big Ten — besting last year’s total of 122.

OLSEN COLLECTS NO. 500
Annika Olsen recorded her 500th dig of the season against Northwestern on Nov. 21. The sophomore led the Big Ten in total digs (546) and digs per set (4.75). Olsen is the sixth Hawkeye to surpass 500 digs in a single season. The Johns Creek, Georgia, native registered 20 or more digs 11 times this season, including a career-high 26 in Iowa’s win over Rutgers on Oct. 31.

KEALA MAKES HISTORY
Loxley Keala recorded her 1,000th assist against Purdue on Nov. 7. The junior’s 1,247 assists rank eighth on Iowa’s all-time career assists list and ninth all-time in assists in a single season. Janet Moylan (1987-90) holds the school record with 5,471 career assists. Keala started every match and every set as Iowa’s setter in 2015. The Kaneohe, Hawaii, native registered 50 or more assists seven times this season, including a career-high 64 against Michigan on Oct. 7.

B1G SETTER OF THE WEEK
Junior Loxley Keala was named Big Ten Conference Setter of the Week for her performance at the Comfort Suites Challenge on Sept. 11-12. It was the first conference honor of Keala’s career. The Kaneohe, Hawaii, native became the first Hawkeye to earn a Big Ten weekly award since Bethany Yeager was named defensive player of the week on Sept. 2, 2013. Keala was the first Hawkeye in program history to win a weekly setter award.

Keala posted 40-plus assists in all three matches that weekend, including 57 against No. 25 Texas A&M. She led the offense to back-to-back matches with a .300 or better attack percentage, including a season-high .379 against Iowa State and .303 versus Texas A&M. Keala tallied 154 assists and averaged 14 assists per set on the weekend.

STUDENT-ATHLETE OF THE MONTH
Sophomore Annika Olsen was named October’s female student-athlete of the month. The award honors University of Iowa student-athletes who display excellence in athletics, academics, and community service, as voted on by their peers. Olsen led the team with a 5.23 digs per set average during the month of October. She reached double digits in digs in all 10 October matches, including a career-high 26 in Iowa’s win over Rutgers on Oct. 31.

ALL-TOURNAMENT HONORS
• Junior Lauren Brobst and sophomore Jess Janota each earned all-tournament team honors following the NIU Invitational on Aug. 29-30. Brobst recorded 51 kills throughout the two-day tournament, including a season-high 21 against Northern Illinois on Aug. 30. Janota finished the tournament with 31 kills. She paced the team with 17 kills against Pacific on Aug. 29.
• Junior Loxley Keala and Brobst were named to the Hawaiian Airlines Wahine Volleyball Classic all-tournament team. Keala led the team in assists throughout the three-day tournament (Sept. 4-6), tallying 93 total assists. Brobst paced the team with 34 kills.
• Janota was named tournament MVP following the Comfort Suites Challenge on Sept. 11-12. The sophomore finished the weekend with 41 kills, including a career-high 20 against Iowa State. Senior Mikaela Gunderson and Brobst were both named to the all-tournament team. Brobst led the team with 45 kills in three matches, while Gunderson posted a .459 attack percentage and 30 kills.
• Keala earned tournament MVP honors following the Holiday Inn Hawkeye Challenge on Sept. 18-19. The junior finished the weekend with 152 assists, averaging 12.67 assists per set. Gunderson and freshman Reagan Davey were both named to the all-tournament team. Gunderson hit .408 in four matches with 24 kills, while Davey notched 33 kills on the weekend, including 14 against Coastal Carolina on Sept. 19.