Mallett Out Quick with a Fast Time 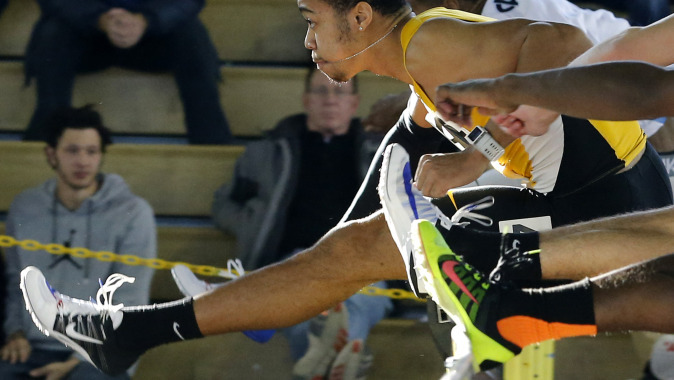 In his second race of the young season, the University of Iowa junior won the 60-meter hurdles in 7.82 seconds. It marked Mallett’s second-fastest time, just 0.03 seconds slower than his sixth-place performance at the 2015 NCAA Indoor Championships.

Here’s more good news: throughout his career, Mallett has shown progressive improvement during the season.

“To an extent, yeah, I’m a little surprised (by the 7.82 time),” Mallett said. “I’m not used to coming out this early and dropping a time that fast. For me to hit that this early is huge. I know I have a lot of things to fix and tweak, so to go that fast that early is great.”

Mallett ran 7.78 at the 2015 Big Ten Indoor Championships in Geneva, Ohio, finishing runner-up in the 60 hurdles to Nebraska junior Olada Akinmoladun (7.72). The difference is that the league championship is at the end of February, not the second competition of the season. There are 37 days of improvement for Mallett before the 2016 Big Ten Championships on Feb. 26.

“I’m happy with where we’re at right now,” said Joey Woody, UI director of track and field. “This last week he started putting good things together in practice and he is able to come over in the field of competition and simulate exactly what we have been doing in practice.”

Mallett accomplished the impressive time despite a slow start out of the blocks. But once he cleared the first hurdle, it was Mallett’s race. UI freshman Chris Douglas was second in 8.14 seconds.

“I really moved off hurdle one which was good for me. That made for a good race,” Mallett said.

The 7.82 not only set a UI Recreation Building facility record, but it currently ranks No. 1 in the Big Ten and ties for fourth nationally. Freddie Crittenden of Syracuse ran 7.71 on Jan. 15.

Mallett is familiar with the national stage, both indoor and out. Last season he followed his runner-up indoor finish at Big Tens and sixth-place effort at NCAAs by winning a Big Ten title in the outdoor 110 hurdles and placing fifth at the NCAA Championships with a school-record time of 13.40 seconds.

“I need to stay within my own head and not get too focused on what other people are doing,” Mallett said. “I know people are running fast, but I’m running just as fast. I need to believe in myself, my training, and in what my coaches think I can do and I’ll be successful. I believe I can be a national champion.”

“He wants to win the national meet and I have full faith that he can do that,” Woody said. “It is a process and the best thing about Aaron is he loves the process. He doesn’t get too far ahead of himself. He’s not chasing times, he is focused on himself and improving every week. That’s all you have to do.”

Mallett wrapped up the Iowa Duals by running the second leg on the Hawkeye 4×400-meter relay that won by more than three seconds over runner-up Iowa Central.

Iowa returns to action Saturday at the Big Four Duals hosted by Iowa State at the Lied Recreation Center in Ames, Iowa. Drake and Northern Iowa will also be represented.