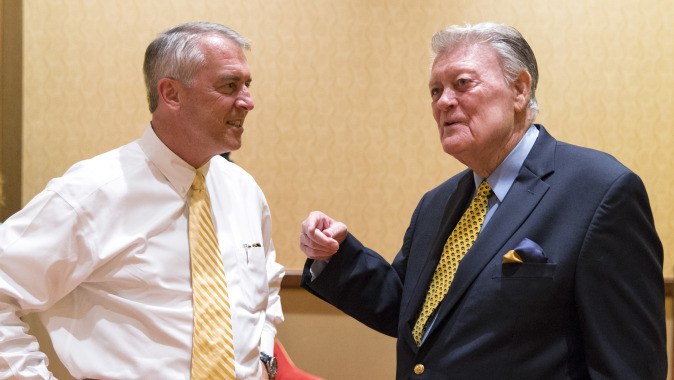 IOWA CITY, Iowa — University of Iowa Director of Athletics Gary Barta has been named a 2015-16 Under Armour Athletics Director of the Year award recipient by the National Association of Collegiate Directors of Athletics (NACDA). The award was announced by NACDA Wednesday morning.

Barta, along with additional NACDA award recipients in seven divisions, will be recognized during the James J. Corbett Awards Luncheon on June 15 at NACDA’s 51st annual convention in Dallas. The awards highlight the efforts of athletics directors at all levels for their commitment and positive contributions to student-athletes, campuses, and their surrounding communities.

Barta is in his 10th year in his current position and recently signed a five-year contract extension that carries through 2021.

Iowa’s 24 sports teams completed the 2014-15 year with 535.50 points in the annual Learfield Sports Directors’ Cup competition – the most points the UI has ever accumulated in the history of the competition. That point total resulted in a 44th-place finish, the third best recorded by the UI and its best since 2004-05.

Also in 2014-15, Iowa was one of only eight programs in the country to rank in the Top 25 in attendance for football, women’s basketball, and men’s basketball, while the Iowa wrestling program once again led the nation in attendance. The UI also experienced sharp increases in spectator interest in baseball and volleyball in 2014-15.

In the classroom, Iowa tied its record for its NCAA Graduation Success Rate (89 percent) while again achieving a perfect score in the NCAA’s Annual Progress Report. UI student- athletes outperformed their peers nationally in the classroom for the fifth consecutive year.

The 2015-16 year has been a good one to date for Hawkeye athletic teams. The Iowa football squad completed a perfect 12-0 regular season, winning the Big Ten West Division while earning a spot in the 2016 Rose Bowl.

Under Barta’s leadership, the UI athletics department continues its significant service and contribution to the greater Iowa City area community, taking a leadership position in matters related to student-athlete welfare, and remaining among the handful of intercollegiate athletics programs nationally that successfully maintains its status as 100 percent self-supporting. Barta is responsible for an annual operating budget that is nearing $100 million.

The majority of that revenue comes as a result of success in traditional revenue sources: Income as a result of membership in the Big Ten Conference (including television), sales of tickets to events on the UI campus, and donations to the National I-Club.

Barta is a member of the President’s Cabinet, comprised of vice presidents and other campus leaders that provide counsel to the UI president. That group was instrumental in the UI’s response to record-setting flooding that besieged the campus and the Iowa City and Coralville community in June 2008 and has been involved in several University wide strategic plans responding to the expectations of the residents of the state, members of the state legislature, and the State of Iowa Board of Regents.

Barta also represented the UI and the Hawkeyes at the conference and national level this past year as a member of the Rose Bowl Management Committee and the College Football Playoff Advisory Committee. During his tenure at the UI, he has participated in the creation and implementation of the Big Ten Network (BTN), the expansion of the Big Ten Conference, and the Big Ten’s postseason bowl game agreements that were successfully implemented in 2010.

Barta remains active on the conference and NCAA level. He is involved in committee work with NCAA Football, the Division IA Athletic Directors Association, and is an ongoing participant in NACDA. Barta is also involved in a variety of community groups, including the United Way of Johnson and Washington Counties and the Partnership for Alcohol Safety, a joint effort between UI campus leaders and the city of Iowa City.

Barta earned a Bachelor of Science degree in mass communication and broadcast journalism from North Dakota State in 1987. He was an option quarterback for Bison football squads that won the Division II NCAA National Championship in 1983, 1985, and 1986.