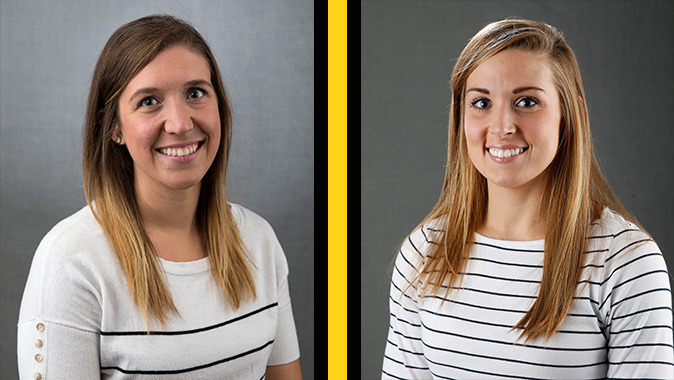 Payton replaces Danielle Carlson, who left to pursue a career outside of athletics.

“Bre is one of the few coaches whose playing resume matches her coaching ability,” said Shymansky. “As an All-American setter she demonstrated leadership, drive, focus, and the will to win. Those same traits will be invaluable for us in her role as our offensive coordinator.

“Growing up in Iowa, Bre knows what it means to be a true Hawkeye. She will bring experience, passion, grit, and energy into our program. We look forward to her continued impact on our program.”

“I’m more than grateful for the opportunity to be an assistant coach here at Iowa,” said Payton. “It’s a privilege to be able to coach in my home state and in the Big Ten. I am excited to see what the future has in store for Iowa volleyball.”

She completed her degree at UNI in movement and exercise science: sport psychology in 2012.

Sparks joins the staff as the interim director of operations after two years as a staff member in the Iowa Athletic Department. She has served as a learning assistant for Academic Services, a sports operations coordinator, and spent time working with the event management team since June of 2014.

“Emily has been a great Hawkeye staff member inside the athletic department and has a proven track record of success,” said Shymansky. “I have seen her work diligently with different programs inside the department, and Emily always has a positive impact.

“I am confident that she will be able to serve the needs of the women on our team and organize all aspects of our operations. Her collegiate volleyball playing experience is invaluable in her capacity as a director of operations.”