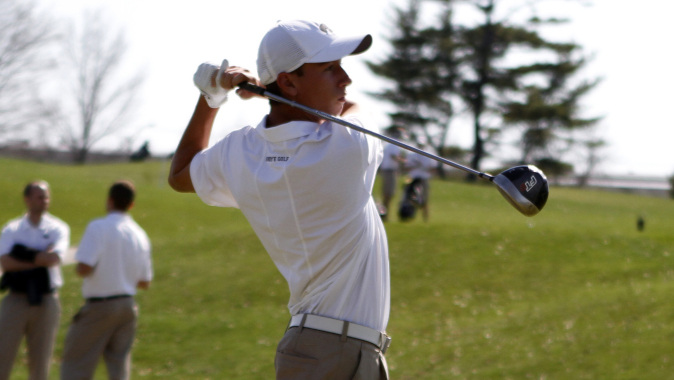 IOWA CITY, Iowa — It took a shot in the dark for former University of Iowa golfer Vince India to qualify for his first PGA Tour Event — the 2016 Valspar Championship.

“The sun had already set when I teed off on 18,” India said. “I hit the tee shot, and I knew it felt good coming off the club. I could only see it for the first 100 yards or so, but I knew it was right down the middle.

“I decided to go right at the pin from there, and I hit it right over the top of the flag. When I made the putt for birdie people went berserk. Another three or four minutes and it would have been unplayable. You would not have been able to see the golf ball in front of you.”

“I’ve played 20 or 25 competitive rounds at that course,” India said. “I was talked into coming down by one of my friends that lives on the property. He told me to come down since I knew the course so well, so I thought ‘Why not?'”

The familiarity proved to be beneficial. India made par on nine holes and birdied eight, including six on the front nine to earn a spot in the Valspar Championship at the Innisbrook Resort’s Copperhead Course in Palm Harbor, Florida.

“It feels terrific,” said India, the 2011 Big Ten Player of the Year. “It’s very satisfying coming from a somewhat disappointing finish to my 2015 season. I’m glad to see everything pay off this early in the year.”

India competed at Iowa from 2008-11. He led the Hawkeyes to a 10th-place finish at the NCAA Championships in 2011. The Deerfield, Illinois, native won the Les Bolstad Trophy for lowest season stroke average in the conference. His season scoring average of 71.08 still stands as the lowest in Iowa golf history.

While India is about to step onto golf’s biggest stage, he remains thankful for his experience as a student-athlete at the University of Iowa.

“Coach (Mark) Hankins (now the Assistant to the Director of Athletics at Iowa) helped carve me into the human being I am today,” said India. “He gave me the right attitude to play professional golf, and instilled the perseverance and mental strength that you need to have to compete on the PGA Tour. He was the first guy to teach me those fundamental skills.”

Now, India is using those same skills to keep his nerves under control for first PGA Tour event.

“It’s my first event on the PGA Tour, but the game is still the same,” India said. “The grass is always green and you hit the same white ball. You’re just trying to do the best you can.

“Regardless of how I finish this week, it’s going to be so much fun. It will be a great learning experience, but I also think I can compete. My game is at a good level right now.”