IOWA CITY, Iowa — The University of Iowa volleyball team was prepared for big things in 2015, now, as third-year head coach Bond Shymansky says, the time is now to take it a step further.

The 2015 season was highlighted by back-to-back wins over No. 25 Texas A&M and Iowa State in September. These days the Hawkeyes expect landmark victories in the months of October and November while competing in the powerful Big Ten Conference. 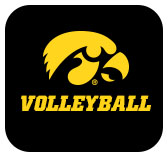 Shymansky’s Hawkeyes tore through the nonconference portion of their schedule a year ago, winning 10 of 13 matches and eight in a row from Sept. 6 to Sept. 19. Sometime afterward, Iowa let its mojo slip and finished with a record of 12-21 overall, 2-18 in the Big Ten.

Enter Mission T-M-T. It is the mantra for the UI program in 2016, focusing (the key word is focus) on True Mental Toughness to fuel success from late August into the month of December.

“True mental toughness is defined as having a great attitude, giving others your best, treating others well, and being unconditionally grateful regardless of your circumstances,” Shymansky said at a Media Day news conference Friday in Carver-Hawkeye Arena. “As we work to do that on a day-by-day, minute-by-minute basis, we know that those types of measures of true mental toughness are what will allow us to be successful as individuals as well as as a team.”

Reuter was welcomed quickly by the Hawkeye staff and teammates, a feature she says describes the culture within the program that will pay off if Iowa hits a rut during the five-month-long season.

“You can see how things have progressed not only in winning, but with team cohesiveness,” Reuter said. “Having that team chemistry will help our success continue throughout the grind of the year.”

An excellent illustration of team-building occurred from May 24-June 6 when the Hawkeyes traveled to four countries as part of the program’s first European Tour. Iowa made stops in Germany, the Netherlands, Poland, and Ireland.

“A life-changing, once-in-a-lifetime experience and a fantastic team-building experience,” Shymansky said. “I can’t remember most of the points that we played in Europe, but I can remember every place we went and I remember every meal we had and every person we met. So there are great story lines that happen outside of sports.”

Keala notices more depth and talent on this Hawkeye team.

“We have a lot of new faces with freshmen and transfers that will help us become deeper in each position,” Keala said. “That creates a more competitive atmosphere in practices and will push us to be better in games. We’re more experienced and have better talent, now we have to show it on the court.”

Fans of the Hawkeyes can get a glimpse of the team Saturday during the Black and Gold Scrimmage in the practice gymnasium on the second floor of Carver-Hawkeye Arena. The team will participate in drills and then scrimmage from 3-5:15 p.m. (CT) with fan interaction beginning at 5:30.