That’s when Brobst caught the attention of University of Iowa coaches while warming up for a first-round match against West Delaware on Nov. 7, 2012. Prior to that, Brobst only received interest from NAIA schools close to home.

Once the Hawkeyes turned up the heat on their recruitment of Brobst, other Division I programs followed. But whether she played college volleyball or not, Brobst knew she was attending the University of Iowa. All suspense was removed when former head coach Sharon Dingman offered a scholarship. 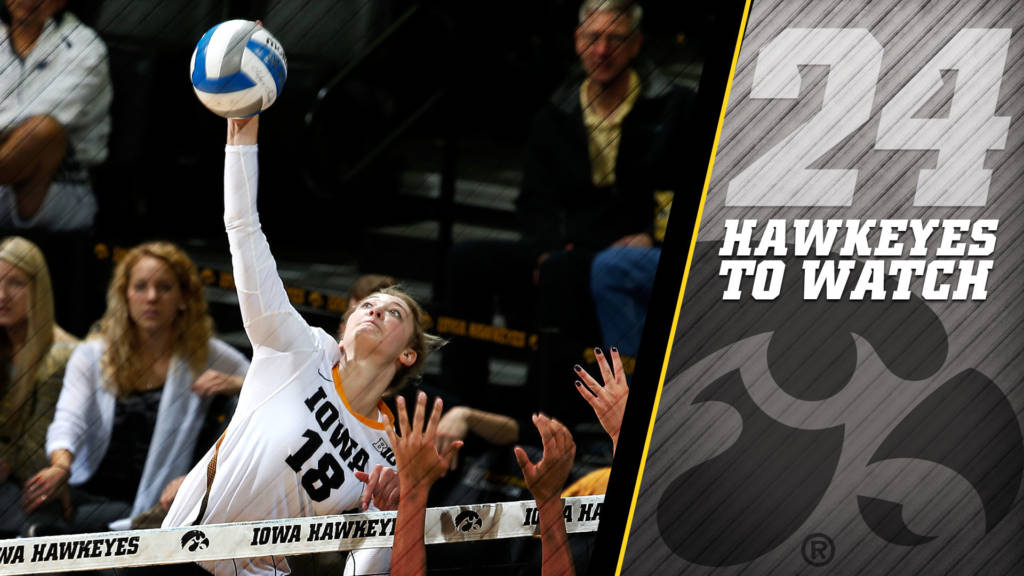 “I told my mom if I didn’t get a good enough volleyball scholarship somewhere I was going to Iowa,” Brobst recalled. “When Sharon offered, the chips fell into place.”

Lauren isn’t the only Brobst wearing black and gold in Iowa City. Her cousin, Hannah, is a sophomore on the Hawkeye women’s soccer team. The cousins grew up being exposed to some not-so-subtle encouragement from their grandfather, who passed away during Lauren’s sophomore year.

“My papa was a huge reason why I loved Iowa, he was huge Hawkeye fan,” Brobst said. “Coming here put the icing on the cake for me. He would have been so proud having two granddaughters playing at Iowa.”

Brobst stayed active as a child with dance, softball, volleyball, basketball, swimming, and track. After eighth grade, Brobst’s mother, Deborah (who played volleyball and basketball at Briar Cliff University), said it was time to decide between softball and volleyball.

“She was thinking about my future and said I was in too many things and thought it would be wise if I chose,” Brobst said.

A couple years later, volleyball made the cut again, this time at the expense of track. A year after that, Brobst stopped playing basketball and started specializing in volleyball.

“I was very thin in high school and I kind of got shoved around the whole time (in basketball),” Brobst said. “I loved volleyball.”

Heelan won four consecutive volleyball conference championships and made four trips to the state tournament from 2009-12. As a senior — when Brobst earned all-state honors — she averaged 2.6 kills per set with a .312 hitting efficiency.

That was followed by a productive freshman season as a Hawkeye. Brobst started nine matches (appearing in 30) and recorded a season-best in kills (23), attacks (39), and hitting percentage (.436) during a season-opening victory over Wofford. She had 144 kills with a .171 hitting percentage.

Her statistics continued to rise in two seasons under head coach Bond Shymansky. As a sophomore, Brobst compiled 293 kills (2.82 per set) and as a junior she hammered 369 (3.21).

“She has one heck of an arm,” Shymansky said. “That cannon keeps reloading every day and every match. She has such physicality to her intensity as an attacker. She has become a huge part of our offense, gets the most sets every match and a lot of times we can count on her to carry us to victory.”

“She has one heck of an arm. That cannon keeps reloading every day and every match. She has such physicality to her intensity as an attacker. She has become a huge part of our offense, gets the most sets every match and a lot of times we can count on her to carry us to victory.” — UI head coach Bond Shymansky on Lauren Brobst

“If you expect to win in the Big Ten, you have to figure out how to pound that ball down on the floor,” Shymansky said. “Lauren has the gun to do it. Her strengths keep rising, her jump keeps rising, her game keeps rising, and she is helping our program rise.”

“When Bond came in we won six conference games and last year we only won two,” Brobst said. “I would like to see that six number continue to rise. Our team is still growing.”

Brobst is one of four seniors who will lead.

“We work a lot with our group on true mental toughness,” Shymansky said. “Lauren has been a tough mental competitor and leader within the program. She has a great attitude, is inspiring to those around her, and has put the sweat equity into what we are working to accomplish.”

Look for Brobst to take charge all season, especially during critical junctures in the schedule.

“What we need to focus on this year is when we’re in that rough patch, we have to stay focused and strive to be the volleyball team I know we can be,” Brobst said.

The Hawkeyes opened the season by going 3-0 to win the Northern Illinois Invitational from Aug. 26-27. Brobst was named tournament MVP after she posted 38 kills and a .471 hitting percentage during wins against Loyola Chicago, DePaul, and Northern Illinois.

Iowa returns home for matches against Western Illinois, Arizona State, Butler, and Oakland in Carver-Hawkeye Arena on Friday and Saturday at the Hawkeye Classic.