IOWA CITY, Iowa — The first NCAA Men’s Swimming and Diving Championship was held in 1937 — 20 years following the inception of the University of Iowa men’s swimming and diving program. 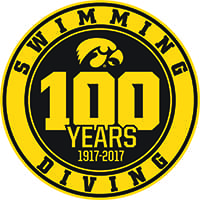 When it came to supporting and promoting the sport, Iowa assumed a lead role. Even in those early years, the Hawkeye program was innovative and successful.

“The University of Iowa was one of the first swimming and diving programs at the NCAA level,” said Bob Rydze, who served as the Hawkeyes’ diving coach for 37 years. “Coach (Dave) Armbruster coached at Iowa for 42 years and at that time, Iowa was a powerhouse.

“There were a lot of things that went on during that time, a lot of great science.”

In the water, the Hawkeyes finished among the top 10 in the nation 17 times during the Armbruster era.  Iowa placed among the top three in the NCAA twice, including posting a runner-up finish in 1949.

Iowa was also at the forefront in the swimming world as the birthplace of the butterfly stroke.

“That’s such an integral part of our sport, it’s one of the four main competitive strokes,” said Iowa head coach Marc Long. “That’s a big accomplishment.”

The University of Iowa supported swimming and diving from the beginning. The university built the Field House Pool in 1927; it was one of the premier pools in the nation.

“Iowa was blessed with a tremendous investment in the program early on,” said Long. “There was a commitment to having a great program and building a facility like the Field House in the 1920s allowed the school to attract great athletes and legendary coaches.”

The Hawkeyes trained and competed in the historic facility until 2010 when the Campus Recreation and Wellness Center opened, giving Iowa a first-class venue.

“The Field House oozed history and it was a treat to go in there,” said Long. “We’re fortunate to have this new pool; we pinch ourselves every day.”

In its 100-year history, Iowa has had five men’s head coaches — Armbruster, Robert Allen, Glenn Patton, John Davey, and Long.  Patton — the third head coach — led the Hawkeyes back to the top of the conference and ended a dynasty in the process.

Patton took over the program in 1977 and by year five, he had Iowa at the top of the Big Ten.

“Indiana had won the Big Ten 20 years in a row, and in 1980, we beat them in a dual meet at the Field House,” said Patton. “We weren’t quite ready to beat them at Big Tens (Iowa finished third), but the following year the championships were at Wisconsin and we be defeated them handily.

“In 1982, the meet was at (the Field House) and we won by a huge amount to win our second straight conference title.”

“He came up to me and said, ‘Thanks for stopping Indiana’s winning streak, because some day I am going to beat that streak,'” said Patton. “Sure enough he did, Iowa wrestling went on to set a new record for most consecutive championships.”

“We tried to get the elite swimmers from Iowa, get some good walk-ons from the state, and then supplement with out-of-country recruiting,” said Patton. “We were one of the early teams to utilize the foreign athlete.”

In its history, 27 Hawkeyes have competed in the Olympics and there have been 476 NCAA All-Americans, including 19 NCAA champions. The program has 99 Big Ten individual champions and 23 relay titles.  Forty-three teams have posted top 25 NCAA finishes.

The women’s program became a sponsored varsity sport in 1974-75. The women have had 45 All-Americans and 117 NCAA qualifiers since its inception.

“Even though it is a shorter time frame, we have had some outstanding women come through here,” said Long. “We’re reflecting on 100 years, but we think this is going to be a great launching point for the future.”

Long relishes the opportunity to recognize the past while adding to Iowa’s storied history.

“This job has given me the privilege to meet a lot people that competed through the years,” said Long. “They all have stories — some are Olympic gold medalists in some cases — and they all come back to their interactions with this university, the people they met, and how important it is to them.”

“I coached 11 Olympians and that was an honor and thrill in my career,” said Patton. “I cherish the memories from the elite swimmers all the way down to the walk-on that never made the travel team to the Big Ten Championships who went on to become physicians, engineers, teachers, or coaches. Those memories are what coaches love.

“There were some great athletes and some were walk-ons that never got to taste the competitions, but they all benefited from this program.”