IOWA CITY, Iowa — Through many years of struggling and succeeding with golf, University of Iowa freshman Lea Zeitler has come to realize it is one of the most frustrating yet satisfying sports to play.

With its range of eagles, bogeys and everything in between, golf has come to represent life in general for Zeitler. Her life specifically.

It didn’t take long for Zeitler to emerge as one of the top junior golfers in Austria. Then she endured a prolonged slump. Her swing — and consequently, her low scores — vanished.

“I was struggling with life and golf,” Zeitler said. “I did a lot of thinking and asked myself if I wanted to continue to play golf or do something else.”

A member of the Austrian National Team since 2010, Zeitler stuck to the (golf) course, but switched to a coach in Spain. Then she thought back to a prophetic conversation she had with her mother and father on a trip to Florida when she was 10 years old.

“I told my parents I wanted to live in the United States one day,” Zeitler said.

The thought of Zeitler playing golf and earning a college degree in the United States gained momentum. In 2014, Iowa assistant coach Michael Roters, then coaching at Idaho, watched Zeitler card a career-best round of 65 to win the European Girls Team Championship in Slovakia.

Firing a 65 for a 9-under par 135 in 2014 was a highlight for Zeitler. What transpired over the next four-plus years was not.

“My parents saw me suffering,” Zeitler said. “Turning pro was not an option because I was not good enough. I wasn’t happy with how my life was going. My parents felt I should have a change because if I continued on that path, it wouldn’t end well.

“It was a hard process getting out of the dark side. It took a lot of processing and practice.” 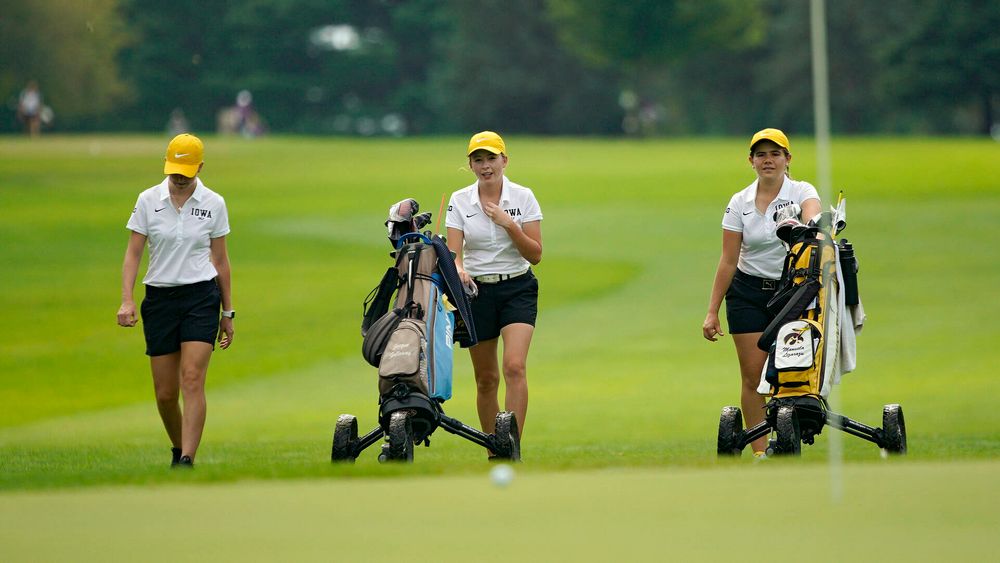 Roters, who was entering his fifth season at Iowa, reached out to Zeitler in the fall of 2019. Iowa head coach Megan Menzel stayed patient in the recruiting process, hoping to land Zeitler, who she referred to as a “next-level athlete.”

“She is one of those players you can rely on,” Menzel said. “She is very skilled, has a lot of great training and is very mature as a player. The thing that gives you the most confidence is how hard she works.”

Zeitler visited campus and knew quickly she had found a new home.

“A lot of people say that where I am from in Austria is paradise,” Zeitler said. “Iowa City is paradise. This is my place.”

Because of the uncertainties of professional golf, Zeitler knew a degree from the University of Iowa would be more important than any medalist honor. She is majoring in communication studies and deciding on a minor in either sociology or gender, women, and sexuality studies.

Zeitler comes from an athletic family. Her mother was a professional tennis player and her father was a coach for the Austrian Ski Association. Because of her mother’s background, Zeitler began playing tennis at a young age.

“That didn’t turn out so well,” she said.

At 7, she started with golf.

“It is a constant cycle, you are always striving for perfection, but you know there is no perfection in golf. It is about trying your best every day. It is so frustrating sometimes, but you get so many rewards by hitting an amazing shot or holing a putt. The way you feel on the course, you can’t compare it to any other sport.”

“It is a constant cycle, you are always striving for perfection, but you know there is no perfection in golf,” Zeitler said. “It is about trying your best every day. It is so frustrating sometimes, but you get so many rewards by hitting an amazing shot or holing a putt. The way you feel on the course, you can’t compare it to any other sport.”

Zeitler opened her Hawkeye career at East-West Match Play from Sept. 23-24 in Madison, Wisconsin. On the first day, she tied for fifth on the leaderboard with a 36-hole score of 2-under 142. The next day in match play, she defeated Alexis Miestowski of Indiana 5 and 3.

“The first tournament was a big deal for me because I came out of a one-year break,” Zeitler said. “It was nice to see all the hard work turned out well.”

“Lea is a very high-strung athlete who is driven in practice,” Menzel said. “Then, when she gets to an event, she is oddly calm. She has a great process and it comes from knowing she is ready. She is able to go out, relax and enjoy competitive golf.”

Zeitler said she needs to constantly develop every area of her game. She is savoring the positives that have occurred during her first collegiate season. On Zeitler’s final three holes at the Entrada Classic, she carded a birdie, par, and birdie.

Now she has an eye on August, when the season begins anew.