Britt Preparing to Finish What She Started

With goals and aspirations getting bigger every year, Britt has faced injuries that continue to put these moments on hold. Her resilience throughout the years speaks to the determination of Britt and the program Coach Eric Werskey has built for the Iowa throws team.

May 11, 2018, the Big Ten Outdoor Championships were held at the University of Indiana. It was also on this day that Britt not only accomplished a goal of her own but exceeded it.

“When we got to Indiana, I was ranked below 10. I was struggling to hit 50’ or even 49’ sometimes,” said Britt. “My technique was good, and I was improving, but I could never get to the spot where I could get a good throw out. Then came Big Tens.”

Britt fouled on two throws, but not before she hit a mark that would take her into the finals. She entered the finals in eighth place, and when the time came to throw, she surprised herself. She hit 54’, a four-foot personal-best.

But why stop at one PR? On her next throw, Britt did it again. She hit 54’ 2.5’’ good enough for fourth place, the highest finish at any meet during her Hawkeye career, indoor and outdoor.

Fast forward one year, and she shined again at the Big Ten Outdoor Championship. Another fourth place finish, and another contribution to the team total. She continues to climb the ladder, when she secures a spot at nationals with her last throw during the NCAA West Preliminary.

“Last year was my first time making it to outdoor nationals,” said Britt. “I had missed indoor nationals that year by two spots. I was battling a hand injury at the time, but I still managed to break the school record, then Lagi (Laulauga Tausaga) broke it immediately after me.”

“Even though I didn’t finish the way I wanted to, the overall experience was good for me,” said Britt. “It gave me motivation to do better next year. That following summer, I lost 25 lbs. in 29 days and I was lifting twice as much. I felt like it was going to be one of my best years yet because it was my last one.” 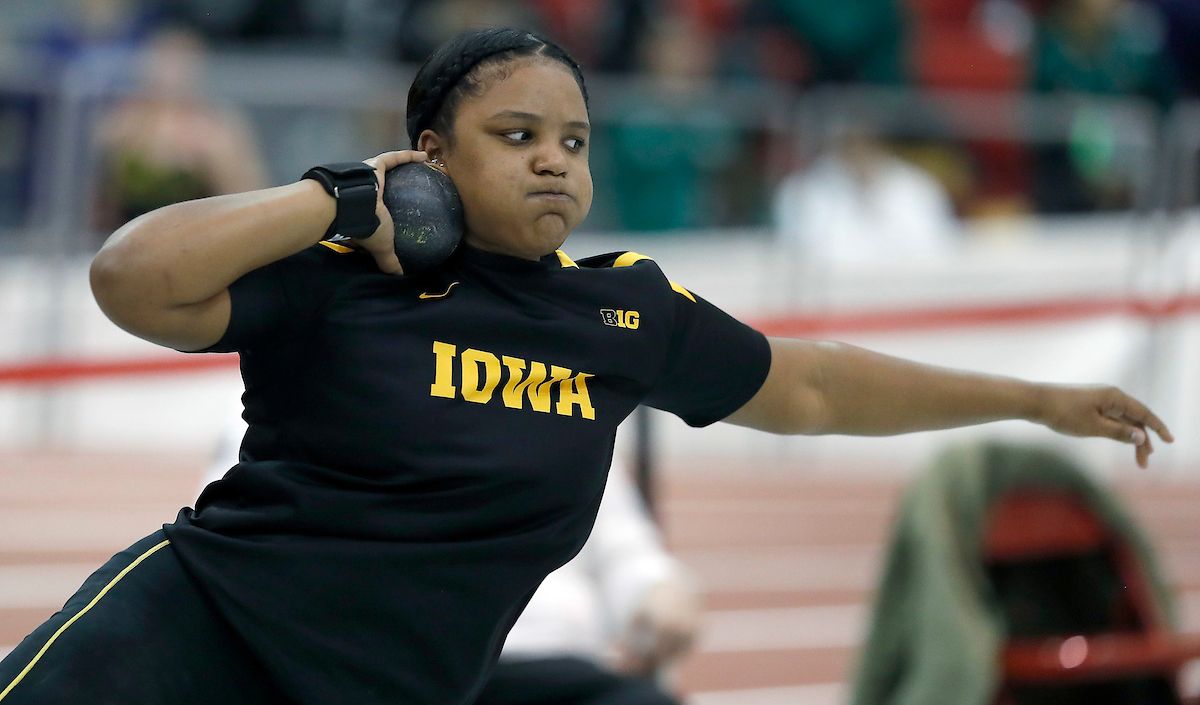 Britt faced an injury before the start of the 2019-2020 indoor season and was medically redshirted.

But what upset her the most was that she would not get to finish her career with one of her best friends, teammate Laulauga Tausaga. Those circumstances changed when the season was canceled due to COVID-19, and Britt was given another season with Tausaga.

“I’m very excited. We thought we would go out with a bang this year but that obviously didn’t happen because of my injury and the pandemic,” Britt said. “It is a blessing in disguise. It’s an honor to be able to get to still do that in 2021. She is my best friend and I have felt like it’s always been the two of us. She has really motivated me and I’m so excited to finally get to do something we have planned so long for.”

They call them the Dynamic Duo. Both grew up in California, approximately an hour away from each other. Britt and Tausaga started at Iowa together as freshmen and it’s been magic ever since.

“Even though we won’t be able to compete together in indoor, she told me ‘Nia let this be your time to shine and when outdoor comes along, we’re going to be killing it together,’” Britt said. “The Dynamic Duo is not dead yet.”

Britt is currently home in Sherman Oaks, Calif. and has been training at her father’s gym anxiously awaiting the 2020-21 season.

When asked what she wanted to accomplish in her senior season, she did not let past adversities alter her final Hawkeye goals.

“When it comes to indoor, a goal of mine is to break some of those meet records,” said Britt. “I want to get a medal at Big Tens, and I want to be so secure with my position that I know I am going to make it to indoor nationals. I want to be that leader for the throws team. For outdoor, I want to place high throughout the season and medal at Big Tens, since I’ve always missed it by one. Besides wanting to make it nationals, I’m aiming for All-American this year.”