IOWA CITY, Iowa — It’s one thing to ask, it’s another thing to act.

Spencer Smith did both as a senior at Alleman High School in Rock Island, Illinois, and he is now one of the top distance runners at the University of Iowa.

Smith, who lives in Bettendorf, Iowa, spent a portion of his senior year wondering what it took to be recruited as a Division I cross country runner. His two-mile times lingered in the low 9-minute, 40-second to high 9:30 range and few programs noticed. During a chat with Randy Hasenbank, associate head coach for distance at the University of Iowa, Smith received an answer.

It wasn’t long before Smith set a school record in 9:17. He placed second in the 1,600 and third in the 3,200 in Class 2A at the Illinois High School Association state meet as a senior. His two-mile time was nearly 30 seconds faster than what he ran when he finished 13th at state as a junior.

“Most runners can’t do it or won’t do it, but Spencer went out and did it,” Hasenbank said. “I knew immediately we had to have this guy on our team because he is committed and coachable.”

Hasenbank told Smith he would be a good fit for the Hawkeyes and, yes, he was worthy of a Division I opportunity.

“Knowing I was good enough to make Division I was important,” Smith said. “It meant a lot for coach to accept me on the team and see me as someone with potential who could do big things even though a lot of schools passed up on me.” 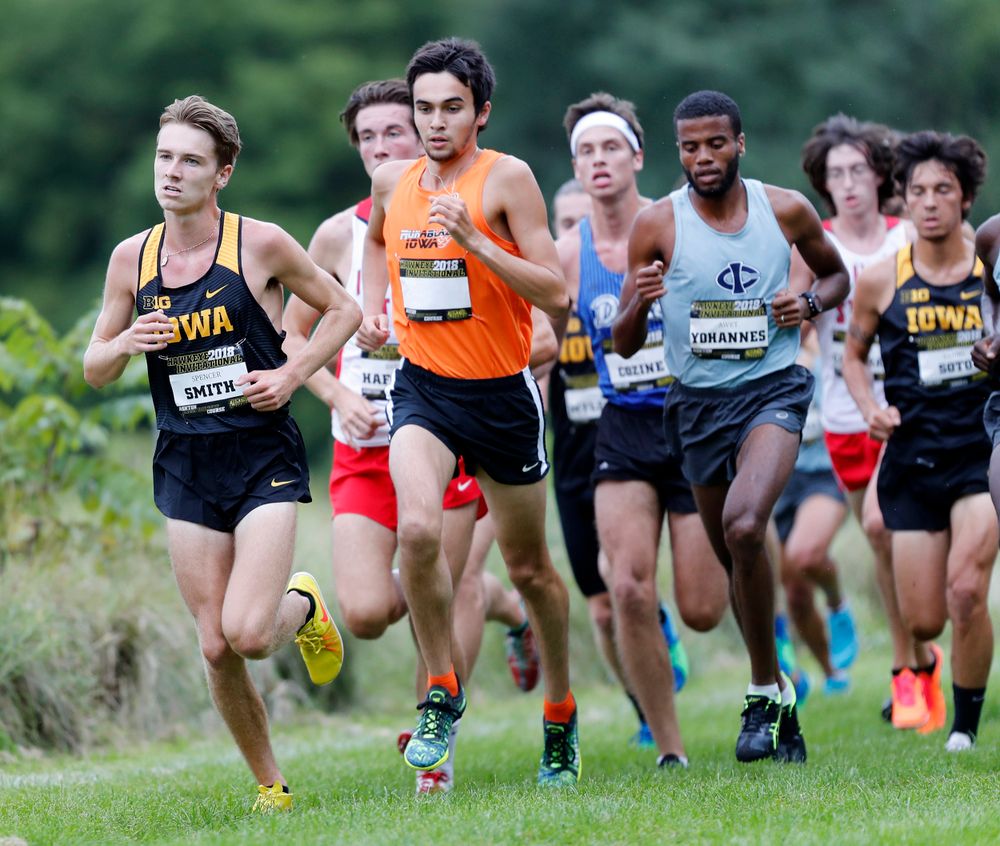 Six times in high school Smith earned All-Western Big 6 recognition. He was the conference champion in the three-mile cross country championships as well as the individual 1,600 and 3,200-meter runs in track.

“Going into my senior year (of high school), my main goal was to hit (9:20) and then get the school record (9:17),” Smith said. “Those times intertwined with each other.”

As a Hawkeye freshman in 2018, Smith competed in five of six races, including the Big Ten Championships and the NCAA Midwest Regional. At the 2019 Midwest Region Cross Country Championships in Stillwater, Oklahoma, Smith was the fifth Hawkeye — and 53rd overall — to finish the 10K race in a career-best time of 32:05.2.

He was poised for another strong season, but on Aug. 11, the Big Ten Conference announced the postponement of the 2020-21 fall sports season, including all regular-season contests and Big Ten Championships due to ongoing health and safety concerns related to the COVID-19 pandemic.

He will spend the fall training and leading.

“I have always had the mindset that if you are going to put time into something, you should do the best you can,” Smith said. “I hope the impact from my work ethic can guide younger kids to push themselves so they can reach their full potential.”

As a youngster, Smith grew frustrated by the subjective nature of receiving playing time for basketball and baseball. Meanwhile, a stopwatch is about as measurable as you can get.

“I have always had the mindset that if you are going to put time into something, you should do the best you can. I hope the impact from my work ethic can guide younger kids to push themselves so they can reach their full potential.”

“Running is based on times and hard work,” Smith said. “Being able to work hard can get you a long way. When I started, I was pretty much an average runner. But I felt if you put in the work, anyone could be good at it.”

Few can question Smith’s commitment. Hasenbank, who affectionately refers to Smith as a “wild horse,” has tried to gently pull back the reigns.

“I have cautioned him that you want to be building momentum late in the race and he has been very coachable in that regard,” Hasenbank said. “He is one of the hardest workers that I have ever had. He will push himself until he drops.”

An example of the wild horse mentality occurred days after Smith concluded his freshman season of cross country when rest and relaxation is expected. After taking a week off, he longed for a return to running, so he found his way to a treadmill…and logged 18 miles.

“Being more coachable in that regard is one of my major goals,” Smith said. “A lot of the time I want to do more and more because I feel like that will make me better.”

Smith has another goal that pertains to track and field. Simply put, he wants to make a travel squad.

“I am going to graduate next fall (after the 2021 cross country season) and I still haven’t been able to compete in track in an Iowa uniform,” Smith said. “When anyone comes here, their main goal should be to compete and represent Iowa and try to make a difference. I want to be able to do my best job to represent the university in a positive way.”