GENEVA, Ohio — Four of five heats had finished in the women’s 600-meter run at the 2020 Big Ten Indoor Track & Field Championships when a Hawkeye-heavy group toed the line. Three entrants were from the University of Iowa and the result in the ensuing race affected how senior Mallory King approached the rest of that season as well as the entire 2021 indoor campaign.

“I knew I needed to take the race out and be confident to lead the whole thing and put myself in position to win that heat,” King said. “That was a big race knowing I set it up from the beginning and took the lead and was confident in the front.”

Since that final, King has been undefeated in races between 600 and 800 meters. She will compete in the 800 and 4×400 relay at the Big Ten Indoor Championships on Feb. 25-27 at SPIRE Institute in Geneva, Ohio.

On her most recent visit to SPIRE two weeks ago, King anticipated a stacked 800 meter race. Instead, many of the projected top runners failed to show. In the past, running a race without elite competition would put a major dent in King’s final time. Not so on Feb. 13. She won the race by nearly three seconds in 2:05.34, the fastest time in the Big Ten and seventh fastest time in Division I.

“I don’t know if she could have done that 18 months ago,” said Iowa assistant coach Jason Wakenight. “That has been a nice change and a significant part of her growth as an athlete.” 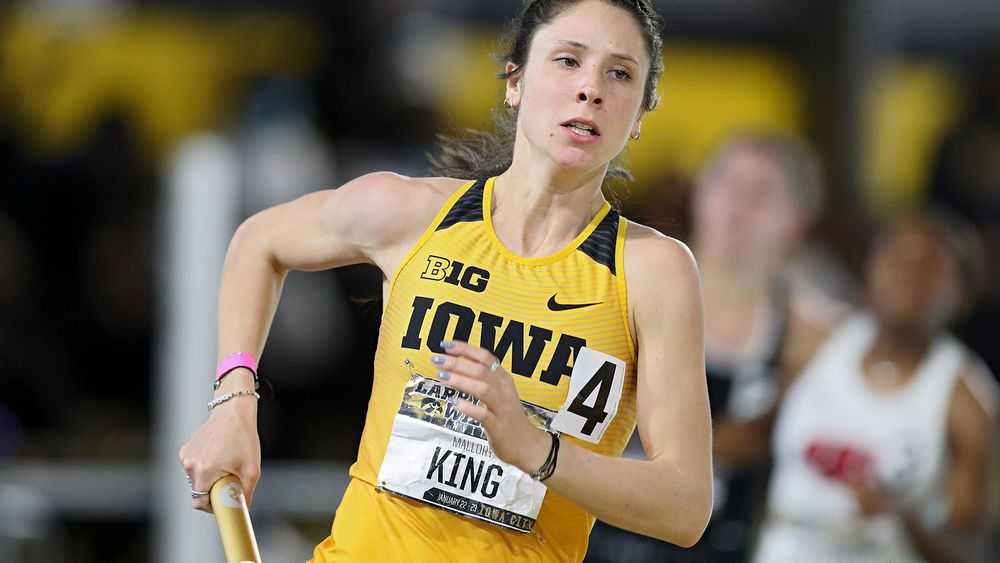 “Winning a Big Ten title is something I have been thinking about for a while. I need to be confident in my race and know I can run with the best in the conference and put myself in position to win any race.”

A 2:21 half-miler in high school, King has chopped 16 seconds at that distance and is looking for a medal at this weekend’s Big Ten Indoor Championships.

“Winning a Big Ten title is something I have been thinking about for a while,” King said. “I need to be confident in my race and know I can run with the best in the conference and put myself in position to win any race.”

For King to have success, Wakenight said she needs to understand exactly where to be at 200, 400 and 600 meters. Then, because of improved endurance and maturation, King should be in contention to place high, even against a quality field.

“She is quite a competitor and is determined to continue to improve,” Wakenight said. “We have a specific race plan we want to execute.”

A redshirt senior from Davenport (Iowa) Assumption High School, King is a fantastic story because of the improvement she has made at Iowa. During her sophomore season, she cracked 2:10 in the 800 and discovered a “sky’s-the-limit” mindset. She no longer worries about who is in her race, instead focuses on how she is going to set the pace. In four individual races this season, King has won three of them. The only time she was not first was in a 400 at the Husker Triangular when she was fifth with a time of 56.56.

Oddly, King’s indoor PR in the 800 (2:05.12) was set last season in a race where she placed third. She has a prediction on when she will eclipse that time.

“I am expecting that this weekend,” King said.