GENEVA, Ohio — University of Iowa junior Peyton Haack highlighted a great Day 2 of the 2021 Big Ten Indoor Track and Field Championships on Friday, winning gold in the heptathlon with a school record 5,749 points. He is the first Hawkeye in school history to win a Big Ten heptathlon title.

“It was an exceptional day for our heptathletes,” said Iowa director of track and field Joey Woody. “They had to fight hard at the end of that meet in the 1,000 and Peyton came out the champ and Austin made the podium with a third-place finish. It kick starts Day 2 for our men and we got a lot of finalists in today.”

“It’s really nice when that work can pay off and show out,” said Haack. “I had to fight for a lot of stuff in the heptathlon. The long jump didn’t go how I wanted it to. The high jump started out really rough. I had to fight for a couple of bars in the pole vault. But all the hard work this year is really starting to pay off for me and there’s no better feeling than taking home a gold medal.”

The Hawkeyes also recorded a pair of top five performances in the pentathlon. Dallyssa Huggins and Tionna Tobias totaled 10 team points for Iowa. Huggins placed third with a personal-best 3,881 and Tobias placed fifth with a career-high 3,625. Those point totals rank fourth and seventh all-time in program history.

“The pentathlon got started at the end of the day and they fought every single event,” said Woody. “They kept working and kept coming and to get two girls into the points and get Dallyssa on the podium is a lot of fun.” 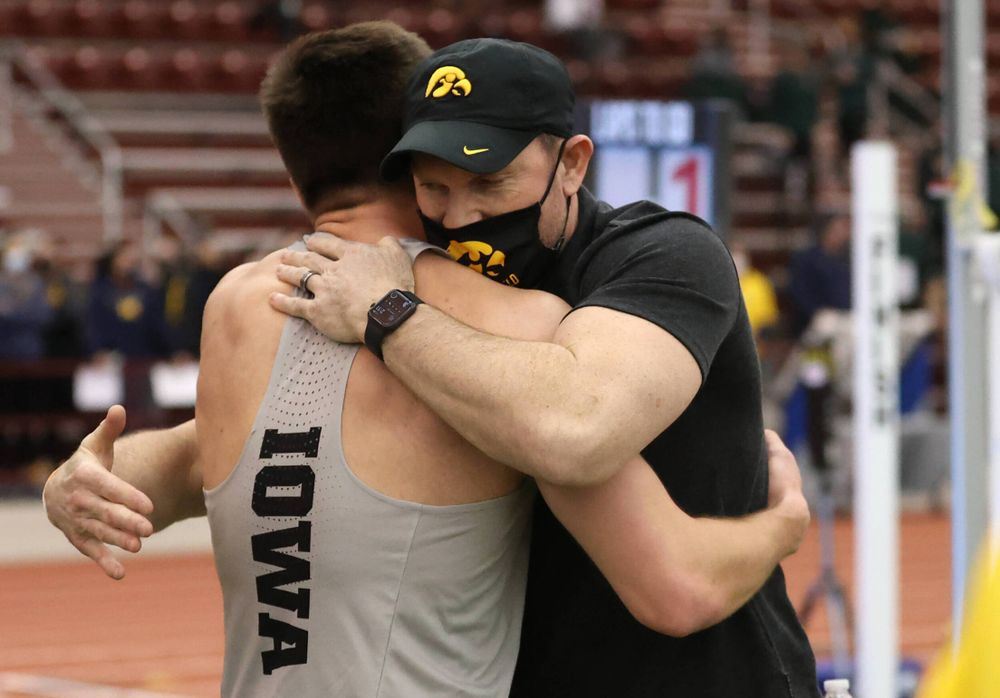 Kal Lewis kicked off the day for the Hawkeyes with a second-place finish in his heat of the mile. Lewis’s time of 4:04.21 is a career best by three seconds, ranks third all-time in program history and earns him a spot in Saturday’s finals.

In the men’s 800 meters, Alec Still finished third in his heat with a career best 1:49.72. Still’s time was good enough to grab one of the two time qualifying spots for Saturday’s final.

Wayne Lawrence Jr. took care of business in the 400 meters, winning his section and advancing to the finals with a time of 46.99. Khullen Jefferson finished second in his heat with a time of 48.47 and will join Lawrence in the finals.

“Seeing a guy like Alec Still lead it from the front all the way through and get to his first final as an individual was really impressive. I’m excited for that guy. You look at the mile and see a guy like Kal Lewis put it out there and making the final. Those are two young guys doing some really good things,” said Woody.

“You look at the 400, getting two guys in there is going to help our team points. Wayne doing his thing, going out competing to win in the 400 tomorrow.”

In the women’s 400 meters, freshman duo Nylah Perry and Tesa Roberts finished fourth and sixth overall to advance to Saturday’s final. Perry posted a time of 54.43 which ranks ninth all-time in program history. Roberts recorded a time of 54.72, a career best.

In the triple jump, James Carter continued his incredible meet with a career-best jump of 15.40 meters, placing fourth overall and scoring five more points for the Hawkeyes.

“James coming off of a big win yesterday and coming back to get big team points in the triple jump, getting fourth, it was a really impressive two days for that guy. He is a big time team player and I’m really excited for him,” said Woody.

“Eavion is a tremendous athlete and we’re blessed to have her in our program. She is just going to get better every week and for her to come in to her first conference championships, her second meet in the uniform, getting runner-up was really impressive. Another freshman doing amazing things is Kayla Hutchins. Getting in there and getting sixth place as a true freshman and scoring big points for the team.”

Mallory King ran away from the rest of her heat in the 800 meters, winning with a time of 2:07.40. King’s time is the top seed heading into the finals.

“Mal leading from start to finish and still holding everyone off to make her final in the 800, I think we have a lot more in the tank tomorrow,” said Woody.

The Hawkeye men lead the team race with 51 points. The women sit in fifth with 22 points.

UP NEXT
The men return to the track with the mile beginning at 10 a.m. (CT). Women’s events begin at 3 p.m. with the mile. The championships are streamed online at BTN Plus.