GENEVA, Ohio — The University of Iowa men’s track and field team scored a school-record 119 points to win the 2021 Big Ten Indoor Track and Field Championships on Saturday at the SPIRE Institute in Geneva, Ohio.

The Hawkeye women placed third with 75 points. It matches the highest finish in program history.

“On the women’s side not everything went our way, but I feel really positive heading into the outdoor season,” said Woody. “Our mission is to be the best program in the country and that starts with being the best program in the Big Ten. I’m excited about where we are but we have a long way to go. We have the right athletes and right coaching staff. We just have to keep building.”

Paige Magee captured gold Saturday with a career-best 8.26 performance in the women’s 60-meter hurdles. She is the second Hawkeye in program history to win a Big Ten title in the event. Jenny Kimbro did it in 2019.

“The strategy coming in was to make it across the line,” Magee said. “I was really nervous coming into it. I was thinking of the conversations with my coaches and freshman teammates about going out here, having fun and being able to end the day with a smile on our faces.”

Magee’s teammate Tionna Tobias returned after the pentathlon last night to finish fifth with a time of 8.57. 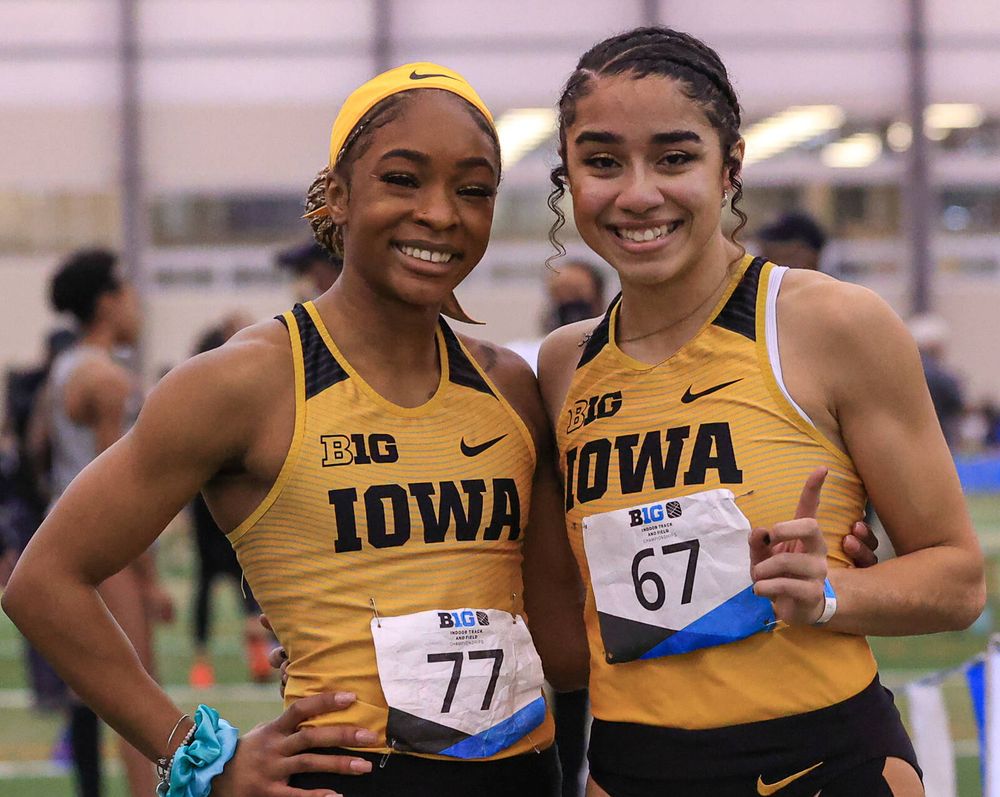 "We had athletes scoring in every single event area. Everybody we brought, and even those back home, were part of this championship. To be able to put all that work in and be so goal-oriented and have this dream to get here, we are so thankful for the opportunity and appreciative of the Big Ten for allowing us to do this and make it happen."

Wayne Lawrence, Jr. earned a pair of silver medals Saturday. He set a season-best time of 45.40 out of the first section to place runner-up in the men’s 400, and doubled back with a 20.89 to place second in the 200. His 400-meter time ranks fourth in the nation. Khullen Jefferson finished seventh in the 400 with a career best 47.91, and Austin Kresley finished sixth in the 200 with a time of 21.19.

Nylah Perry and Tesa Roberts finished fourth and sixth in the women’s 400 meters. Perry recorded a time of 54.54 while Roberts ran 54.78.

Both the men’s and women’s 800 featured gutsy performances. In the women’s 800, Mallory King took the race out from the gun and ran the first 400 meters in 57 second. She finished the race in eighth place with a time of 2:11.11. On the men’s side, Alec Still closed hard on the final stretch to finish runner-up in 1:50.91. Still dove at the line to finish .01 behind the winner.

“Typically, I am the guy that goes out and does the work by myself,” Still said. “In this race I had a couple guys out in front, so I just tagged along with them. It worked out in my favor to kick it home at the end.”

Iowa scored again in bunches in the men’s 600 meters. Julien Gillum won the first section and finished third overall with a time of 1:17.81. Spencer Gudgel and Tyler Olson finished fourth and sixth overall in 1:18.04 and 1:18.40, respectively.

In the women’s 600 meters, Clare Pitcher finished third overall with a career best mark of 1:29.96, a time that ranks seventh all-time in school history.

In the men’s 5000 meters, Noah Healy recorded a career best time of 14:12.47 to finish 14th. Healy’s time moves him from eighth to sixth all-time in program history. Nick Trattner finished 17th overall with a time of 14:18.11. Trattner is now ranked ninth all-time.

LaSarah Hargrove finished fourth overall in the women’s 200 meters with a time of 24.27. This time is a career best for Hargrove by .05 seconds.

The quartet of King, Antonise Christian, Nylah Perry and Tesa Roberts closed the meet for the Hawkeyes finishing second in the 4×400 meter relay with a season-best time of 3:37.91.

QUOTING COACH WOODY:
“I keep telling them it was a whole team effort. We had athletes scoring in every single event area. Everybody we brought, and even those back home, were part of this championship. We had to leave people home who we thought could make some finals. I am so thankful we were able to get through this whole crazy year with COVID, thankful for our administration for helping us through this whole thing, and the Big Ten for allowing us to have it. To be able to put all that work in and be so goal-oriented and have this dream to get here, we are so thankful for the opportunity and appreciative of the Big Ten for allowing us to do this and make it happen.”

“We pride ourselves on developing talent and developing athletes. We are getting great athletes but we’re also developing athletes and that showed. The guys that contributed this weekend are guys that were probable not recruited by any other program in the Big Ten and they scored big points and got on the podium. I’m really proud of this group. They care about each other. They love each other. We love them and it was a lot of fun.”

“I hope I’m not sounding greedy but that’s too close for me. I want to win by 50 points. Then I can take a breath. That was the plan. That was the goal. We were pretty close to that. On my paper I thought we could score 130 points. We could have scored 129 if we had finished the 4×4. We have the team to do it. It has been a long time since we won an indoor championship. It has been kind of our nemesis. We finished runner-up last year. We wouldn’t be where we’re at without building to get here. We have made huge strides over the last couple years. You must get the right athletes and the right staff and right mentality and have the belief that we can be champions. Now we just have to keep building.”

UP NEXT
The Hawkeyes head to Fayetteville, Arkansas on march 12th-13th for the NCAA Indoor National Championships.