THIS WEEK
The University of Iowa men’s golf team returns home on Saturday to host the annual Hawkeye Invitational at Finkbine Golf Course. Iowa will play host to 12 of the Midwest’s strongest teams in the 27th edition of the 54-hole tournament.

Iowa has hoisted the team trophy 15 times in the event’s history and produced 14 individual champions. The Hawkeyes did both in 2019, when Matthew Walker and Alex Schaake claimed co-medalist honors with program-record 54-hole scores of 199 (-14). Iowa looks to follow up that record-breaking performance with its second tournament victory of the 2021 season.

TOURNAMENT SCHEDULE
There will be a shotgun start at 8:30 a.m. (CT) on Saturday and Sunday. Spectators are allowed on the golf course to watch the competition each day.

THE LINEUP
Iowa has not announced its lineup for the event. Individuals will qualify this week.

THE COURSE
Established in 1953, Finkbine Golf Course is the home of Hawkeye golf. The 7,157-yard course spans 200 acres and offers immaculately manicured Bentgrass greens, tees, and fairways, as well as 62 well-kept bunkers.  The signature par-3 No. 13 features a double green with a tee shot over the course’s lone water hazard, which is a favorite of fifth-year senior Alex Schaake.

“The whole back nine is my favorite,” says Schaake. “Hole 13, the island green par-three, is definitely one of my favorite holes.”

“When [No.] 9 is into the wind it’s a really good hole,” adds junior Gonzalo Leal-Montero.

ON THE LINKS
Last time out, the Hawkeyes placed seventh at the inaugural Calusa Cup on April 4-6. The 54-hole event was hosted by Iowa at scenic Calusa Pines Golf Club in Naples, Florida and featured an elite field of competitors. Previously, the team fell to No. 11 Florida in a dual match at Calusa Pines on March 29 and won the team championship at the Spartan Collegiate on March 8-9.

RANKINGS AND HONORS
Alex Schaake currently sits at No. 15 in the PGA TOUR University standings, marking his best ranking in the metric this season. He trails just two other Big Ten golfers.

Schaake also checks in at No. 66 in the GolfStat individual ranking, eight spots ahead of teammate Mac McClear (No. 74).

LOOKING AHEAD
Iowa will travel to Columbus, Ohio, on April 24-25, for the Robert Kepler Intercollegiate at the Ohio State University Golf Club. 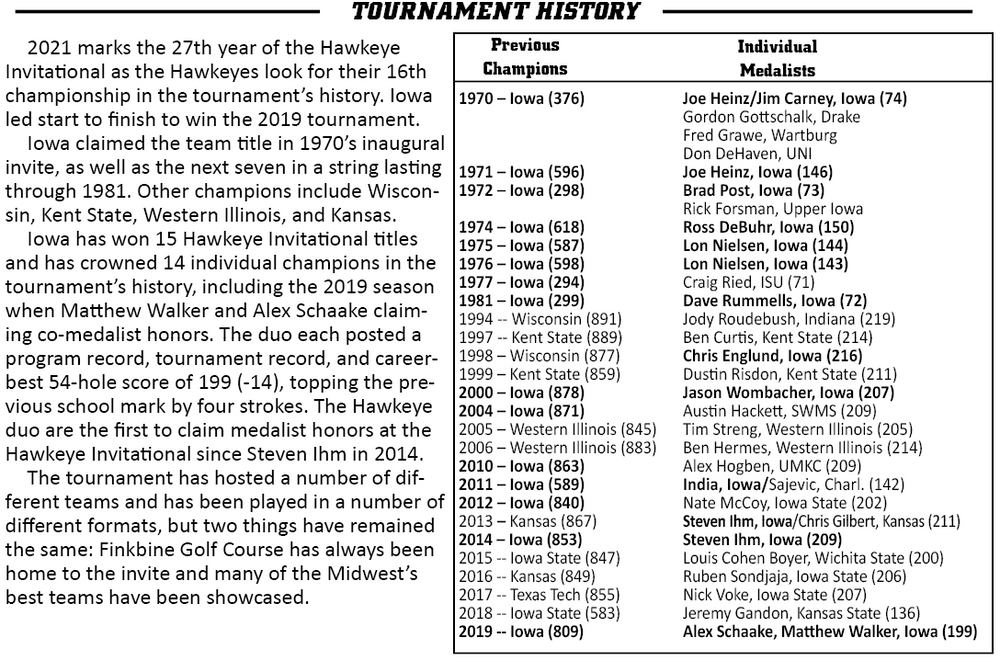