IOWA CITY, Iowa — Not too fast, not too slow.

Chris Douglas is searching for the correct rhythm — or a happy medium with race pace — when he competes Friday in a 400-meter hurdle preliminary at the Australian Track & Field Championships at Sydney Olympic Park Athletics Centre.

A 2019 graduate of the University of Iowa, Douglas was born in Australia and has dual citizenship in Australia and the United States. Thanks to a 49.70-second clocking in the 400 hurdles at the Melbourne Track Classic on March 25, Douglas has the top time in Australia by nearly two seconds in that event. He is used to running his own race but is still balancing how quickly to start and how strong to finish.

There are 21 other entrants in the 400 hurdles and the field will be chasing Douglas, an All-American and Big Ten champion for the Hawkeyes. He came to the University of Iowa from Deerfield (Illinois) High School, where he was a state champion in the 300 hurdles in 2015. Over the next four years, he exceled for the Hawkeyes. In March of 2019, Douglas placed seventh in the preliminary and sixth in the final in the 60 hurdles at the NCAA Indoor Championships. Two months later, he ran a then personal best 50.32 in the 400 hurdles to win a Big Ten individual title. Those points helped the Hawkeyes win a team championship at Cretzmeyer Track.

“I was kind of an underdog but ended up making the final (in the NCAA 60 hurdles),” Douglas said. “I hadn’t broken 51 seconds (in the 400 hurdles) before Big Tens, so I was kind of worried going in.

“It was nice to win the last race of the regular season in front of the home crowd in Iowa. That is something I will remember.”

During the Big Ten team title run in 2019, Douglas also placed fifth in the 110 hurdles. He was one of six different Hawkeyes to score in either the 110 or 400 hurdles in that meet.

Douglas has another memory he uses for motivation. As a child, while watching the Olympic Games with family, he would cheer for athletes from Australia. Now Douglas is in position to be the role model. 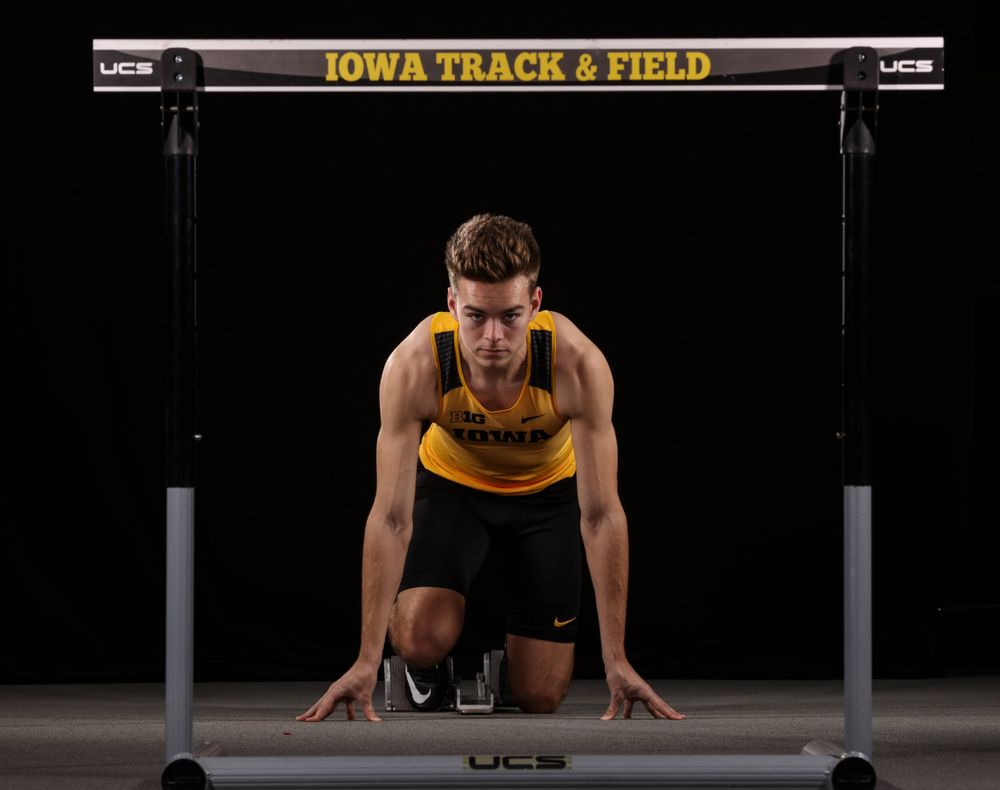 “I’m getting to that point in the season where things are starting to come together. I’m hoping to see a big drop in time. I know there is a lot more there from my last two races, it’s just a matter of fine-tuning everything."

“It’s cool to be one of those people I looked up to when I was a kid,” he said. “There is an emotional connection as well.”

For Douglas to automatically receive a bid to the Olympic Games in Tokyo, he needs to win Sunday’s 400 hurdle final with a time of 48.90 or faster. If he wins the race and does not meet the qualifying time standard, he still has a 2 ½ month window to reach that time. Or he can become an Olympian by being in the top 40 of the world rankings (he is 42nd as of April 13).

“I’m getting to that point in the season where things are starting to come together,” Douglas said. “I’m hoping to see a big drop in time. I know there is a lot more there from my last two races, it’s just a matter of fine-tuning everything.

“The focus is to win this weekend; winning with a qualifying time is preferred. I’m still kind of early in my competition (season) so I may or may not be running that fast yet.”

Douglas’s dad, Paul, is from Australia and still has family there. Douglas was born in Australia and lived there a few years before his family relocated to the United States, where his mother, Anne, has family. Douglas visited Australia often before high school and college activities became too much of a time commitment.

It has been an interesting journey for Douglas over the last season. In 2020, he ran a few races in Australia before the coronavirus pandemic hit and he returned to the United States to train with Joey Woody, director of track and field and the University of Iowa. Douglas returned to Australia on Feb. 5, 2021 (after three days of travel) and was immediately sent to a hotel where he could not leave his room for 14 days.

“Coach Woody and I had to plan for a little different training during those two weeks,” Douglas said.

He had a stationary bike and a barbell in his room so he so he could complete some sort of workouts.

“That first week back (out of quarantine) was still pretty brutal,” Douglas said. “My body was destroyed but I bounced back quickly. When you add in travel time, I went almost three weeks without running.”

“I think there is a lot more coming in the next few races as I’m getting in better race shape,” he said.

The notes came from every current member of the University of Iowa hurdle crew.

“That was nice,” Douglas said. “It’s more good pressure, I know everyone is going to be paying attention.”

And it affirms the adage of Once a Hawkeye, Always a Hawkeye.

“He is a great representative of our program,” Woody said. “It is a big thing for recruiting when you have someone like Chris reach international waters and representing the Iowa uniform.”

The 400-hurdle preliminary for Douglas will be Friday at 3 a.m. Iowa time, 6 p.m. Australia time.