Iowa carded a 6-under par 282 on Sunday and finished with a 54-hole score of 840, which ties the sixth lowest team 54-hole score in program history and equals the second lowest score in tournament annals (2012).

Iowa’s Alex Schaake and Mac McClear finished as the tournament medalist and runner-up. Schaake won the tournament for the second straight time after sharing the 2019 tournament title with teammate Matthew Walker. The Omaha, Nebraska, native led start to finish with a 12-under par 204, which is the lowest score by a Hawkeye this spring. Schaake posted a final round 2-under par on Sunday, sinking four birdies, including a 50-footer on the par-4 14th hole.

“Winning this was one of our team goals, and my goal was to defend the title,” said Schaake. “And if I could do that, I knew it would help us as a team, so that feels really good.

“Our goal was to win this tournament. Overall, I feel like we all played pretty well. It was kind of a tune up for the next few tournaments. Hopefully we can learn from this, learn from our mistakes, and realize that we can still compete when we don’t play great.” 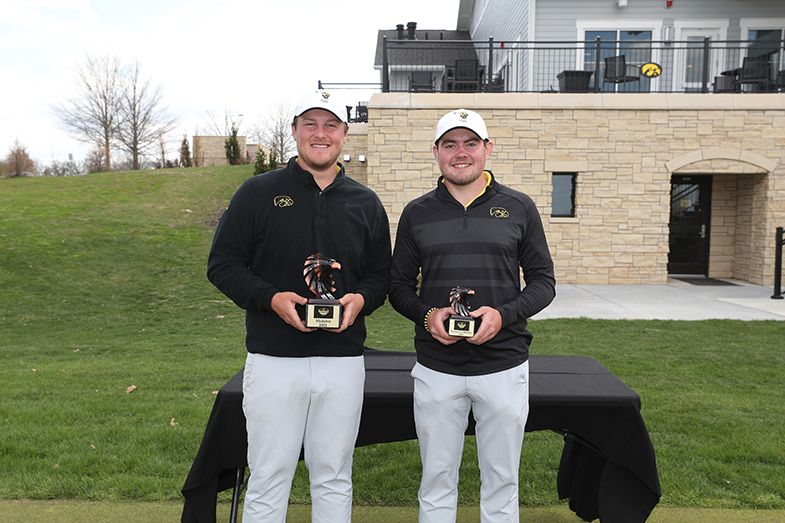 McClear fired a 5-under 67 on Sunday, tying for the lowest score of the day among the 66 competitors. The sophomore recorded six birdies and bogeyed only one hole.

“My game felt good coming into this tournament,” McClear said. “I feel like we had a good approach and had good preparation all week. I feel like everyone on our team was locked in and I believe that led to our good play.

“It’s funny, when I won the tournament at Sea Island, Alex finished second. So he got a little revenge by finishing first today. But I have played well all season, so it is definitely good to get another tournament under my belt. Hopefully I can keep playing like this and carry this momentum into the final tournaments of the season.”

Gonzalo Leal Montero finished two shots back of McClear at 8-under par after his 3-under par 69. Leal Montero birdied a team-best seven holes on Sunday, including a stretch of three straight on holes 10-12.

HEAD COACH TYLER STITH
“I’m happy to get the win. We made it a lot more interesting than it needed to be coming down the stretch, but I am proud of the way the guys started the tournament. We got off to a great start, which set us up to be in position to have a chance to win today. We started the day well, then struggled a little bit in the middle stretch, but towards the end we got the job done.

“Playing on our home course and getting some confidence is good for us. We’re going to the Kepler next week, which is very similar to this golf course. Hopefully this week was a good test for that and we use that momentum for the remainder of the season.”

UP NEXT
Iowa returns to action next week at the Robert Kepler Intercollegiate in Columbus, Ohio, April 24-25.