THIS WEEK
The University of Iowa track and field team travels to Champaign, Illinois to compete at the B1G Preview on Friday and Saturday. Competition begins Friday at Gary R. Wieneke Track with the open women’s hammer throw at 9 a.m. (CT). Competition begins Saturday with the open men’s hammer throw at 9 a.m. A full schedule of events and link to live results is located at hawkeyesports.com/tracklive.

USTFCCCA EVENT SQUAD
The Hawkeyes have eight events ranked in the April 19 USTFCCCA Event Squad Ratings. The events include the nation’s top-ranked women’s discus squad and men’s 110-meter hurdles group. The other events include No. 2 women’s shot put, No. 3 men’s long jump, No. 4 men’s 400 hurdles, No. 4 men’s discus, No. 5 women’s hurdles and No. 8 women’s hammer.

WHAT 2: WATCH 4: WAYNE LAWRENCE JR.
Wayne Lawrence, Jr. ran a leg of the 4×100 relay last weekend at the Husker Big Ten Invite where the Hawkeyes finished third with a time of 40.25. Lawrence has raced one 400 meters this outdoor season, posting a time of 46.14 at the Big Ten Invite #2 on April 10. Lawrence’s time ranks first in the Big Ten and 12th in the NCAA West Region. Lawrence is competing in the 200 meters, 400 meters, and the 4×400 relay this weekend. 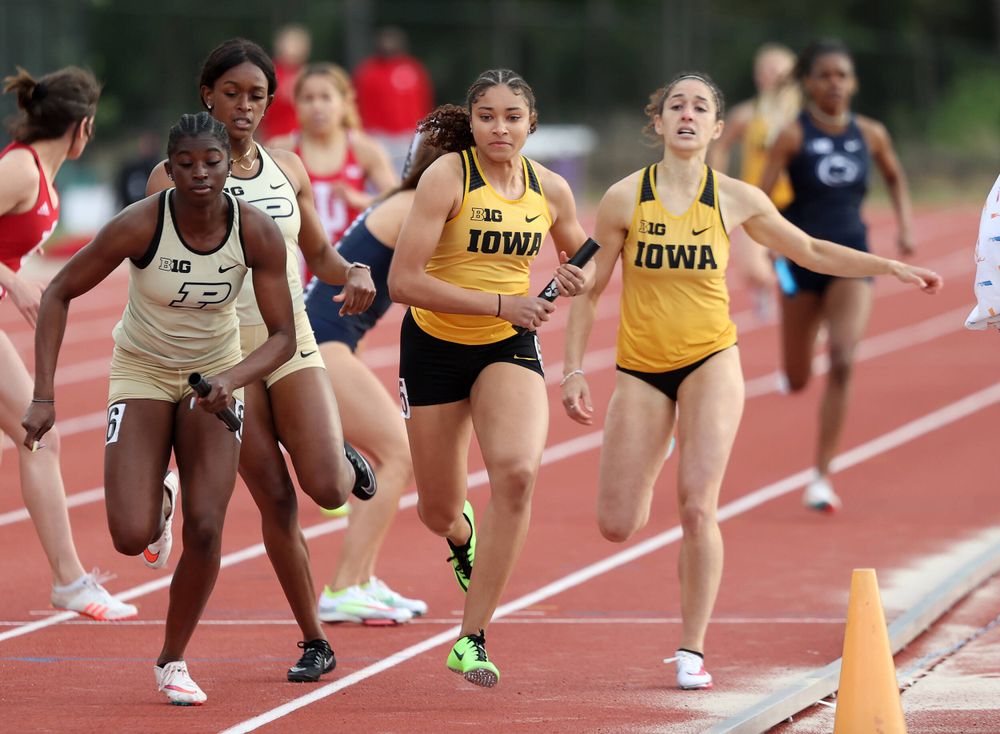 WHAT 2: WATCH 4: KAL LEWIS
Kal Lewis is coming off one the best races of his career by finishing third in the 1500 meters at the Big Ten Invite #3 with a career best time of 3:43.42. Lewis’s time currently ranks second all-time at Iowa, only four tenths of a second away from Jeff Thode’s school record 3:43.02 from 2010. Lewis’s time is sixth in the Big Ten and 29th in the NCAA West Region. Lewis’s time was a career best by more than six seconds from his previous best of 3:49.44. Lewis will be competing in the 800 meters, sprint medley relay, and the distance medley relay this weekend.

WHAT 2: WATCH 4: AMANDA HOWE
Amanda Howe recorded two silver medals in her last two hammer throw events, the Husker Big Ten Invite and the B1G Florida Invitational. Howe recorded a career best in Florida with a throw of 61.31 meters. Howe’s mark currently ranks second all-time in program history, third in the Big Ten this season and 20th in the NCAA West Region. Howe also finished second at the Husker Big Ten Invite with a throw of 59.76 meters. Howe will be competing in the hammer throw again this weekend.

WHAT 2: WATCH 4: AUSTIN KRESLEY
Austin Kresley returns to the track this weekend for the first time since the Big Ten Invite #1 on March 26, where he recorded a gold medal in the 100 meters and a silver in the 4×100 relay. Kresley won the 100 meters with a career best 10.44. Kresley’s time currently ranks eighth in the Big Ten and 38th in the NCAA West Region. Kresley also ran a leg of the silver medal winning 4×100 relay that posted a time of 39.85. Kresley will be competing in the 100 meters, 200 meters, 4×100 relay, and the sprint medley relay this weekend.

WHAT 2: WATCH 4: JENNY KIMBRO
Jenny Kimbro is coming off a gold medal winning performance in the heptathlon last weekend at the Husker Big Ten Invite. Kimbro posted a point total of 5,543 and recorded a career best in the javelin throw with a mark of 35.53 meters. Kimbro’s point total ranks first in the Big Ten by over 200 points and sixth in the NCAA West Region. Kimbro will be competing in the 100 hurdles, 400 hurdles and the 4×100 shuttle hurdles relay this weekend.

WHAT 2: WATCH 4: NATHAN MYLENEK
Nathan Mylenek is coming off one of the best races of his career, finishing seventh last weekend in the 5,000 meters at the Big Ten Invite #3 with a career best time of 13:54.15. Mylenek’s time ranks second all-time in program history, under five seconds behind Micah VanDenend who ran a time of 13:49.31 in 2007. Mylenek’s time ranks seventh in the Big Ten and 28th in the NCAA West Region. Mylenek will be competing in the 1500 meters and the distance medley relay this weekend.

BIG TEN HONORS
Senior Laulauga Tausaga has been awarded Big Ten Field Athlete of the Week two times this season. She swept the shot put and discus events at the Big Ten North Florida Invitational on April 2-3. She won the shot put with a throw of 17.94 meters, then the No. 1 mark in the country. She won the discus with a mark of 59.24 meters. She also swept the discus and shot put evets at the Big Ten Invite #1 on March 26-27. Her discus mark of 60.81 meters leads the country. Junior Jamal Britt was named men’s track athlete of the week after setting career bests in the 110-meter hurdles and 200 meters at the Big Ten Invite #1. He won the 110-meter hurdles in 13.68, a mark that ranks sixth all-time in program history. He ran the 200 in 21.22.

REIGNING BIG TEN OUTDOOR CHAMPIONS
The Iowa men’s track and field team won the 2019 Big Ten Outdoor Track & Field Championships on its home track in Iowa City, Iowa. The Hawkeyes claimed their fourth program title, and as defending Big Ten Outdoor champions (2019) and the reigning 2019 indoor champions, are among the favorites to win it again. The last Big Ten men’s team to win consecutive outdoor championships was Minnesota in 2009-10.

2021 BIG TEN INDOOR CHAMPIONSHIPS WRAP UP
The Hawkeye men won the 2021 Big Ten Indoor Championships with a school record 119 points. It was Iowa’s first outright Big Ten Indoor Championship since 1929. The men won two gold medals including James Carter in the long jump and Peyton Haack in the heptathlon. The women placed third with a total of 75 points, matching the highest finish in program history. Paige Magee won gold in the 60-meter hurdles.