IOWA CITY, Iowa — Enjoy her while you can, Hawkeye fans.

Eavion Richardson’s stay in Iowa City will last less than a calendar year, so make sure you soak in her colorful hair, lively demeanor and exceptional jumps as the University of Iowa track and field teams head into the championship portion of their schedule. The mention of championship portion is enough to turn Richardson into what she describes as “a different character.”

“I’m very much a championship performer,” says the native of Luton, Great Britain. “The smaller competitions are a building step for me. I feel I get into a different type of mode (for championships). I like to perform for people, especially on a bigger stage. I’m feistier. I know what I want and how I’m going to get it.”

A perfect illustration is Richardson’s performance at the Big Ten Indoor Track & Field Championships on Feb. 26 in Geneva, Ohio. Her only previous competition in college (or the United States) came two weeks earlier at the Hawkeye B1G Invitational in the University of Iowa Recreation Building. She fouled on all three attempts.

“I didn’t mind that I scratched on all my jumps because (the distances) still showed I was pretty good,” Richardson said.

She suffered a hamstring injury in early December, so it was a battle in itself just getting into the lineup for the Big Ten Indoor Championships. Richardson arrived in Ohio with half of her hair colored black and the other half yellow. She left with a silver medal after a leap of 41-feet, 3 ¼-inches (12.58 meters). 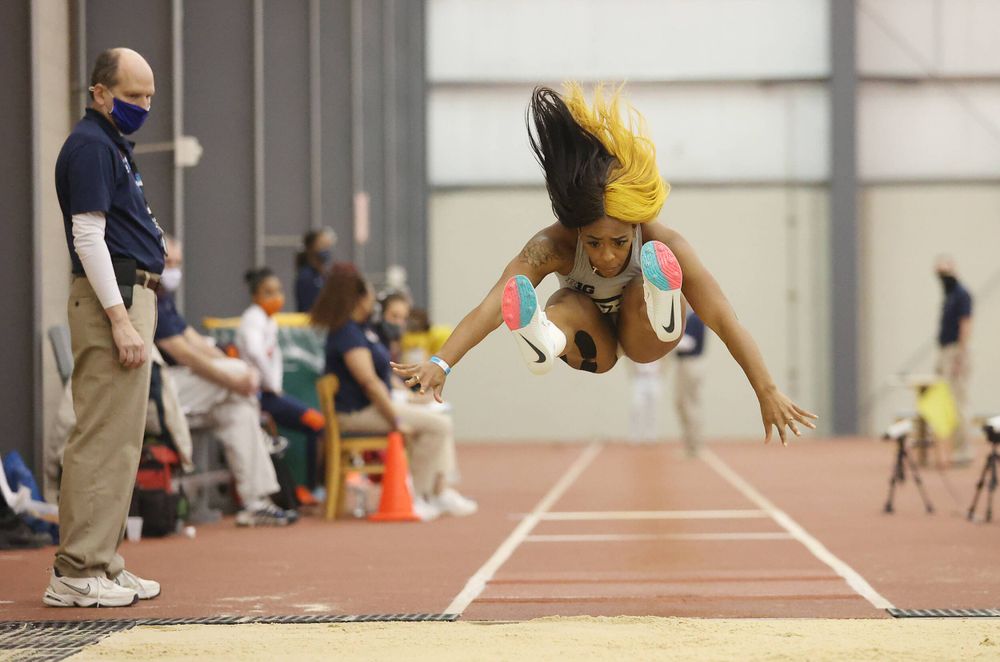 “I’m very much a championship performer...I get into a different type of mode (for championships). I like to perform for people, especially on a bigger stage. I’m feistier. I know what I want and how I’m going to get it.”

“I was excited to compete and the aim was to always get a medal.” Richardson said. “Big jumps came out and I was OK with my 12.58 meters. It was a good sign.”

The origin of the flashy hair began while she attended the University of East London, which features blue as a school color.

“I had two-tone blue hair and I was like, ‘Yep, I’m going to be a Smurf,’” said Richardson, referring to the fictitious, small, blue creatures.

Although she enjoys the look, she vows to have short hair when competing in the long jump and triple jump at the Big Ten Outdoor Championships on May 14-16 in Champaign, Illinois. The reason? At the indoor championships, her long hair cost her distance on a few attempts.

“The hair definitely hit the sand and they marked it from there instead of where (my feet) landed,” Richardson said.

Primarily a tumbler in gymnastics until she was 15 years old, Richardson relied on that background when she switched sports.

“I know I’m bouncy, I guess I should jump,” she thought. 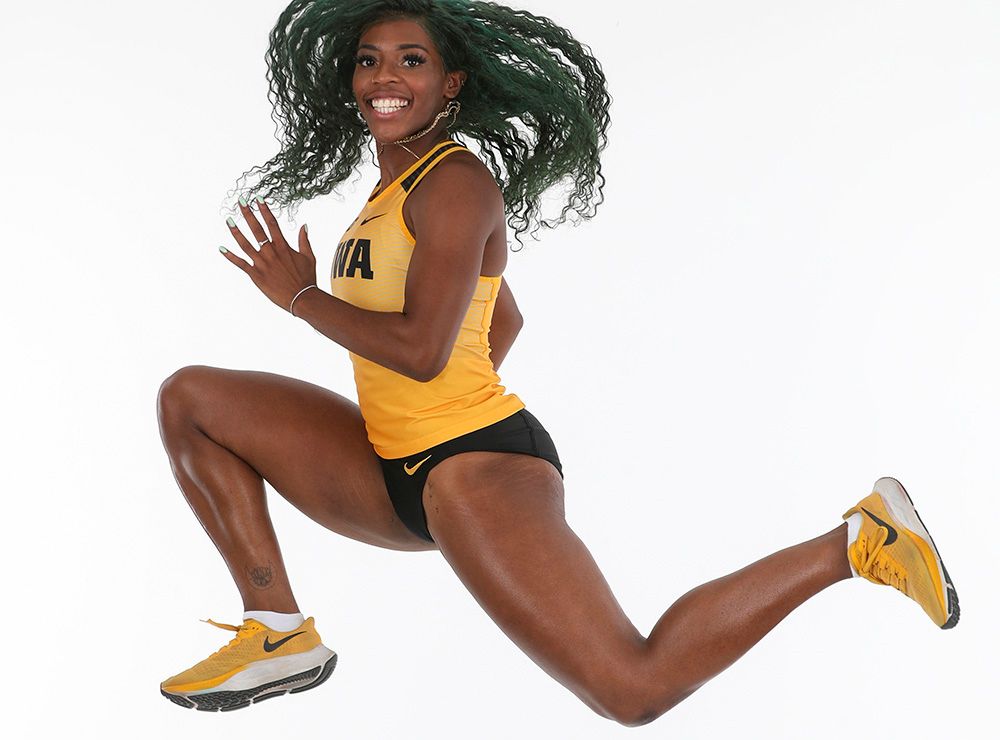 It turned out to be a good move. Richardson attended Lealands High School in Luton, England and spent her final two years at Luton Sixth Form College. Her club was Shaftesbury Barnet. Two highlights before coming to Iowa were gaining her first England senior vest in the triple jump at the 2019 Loughborough International (42-0, 12.80 meters) and placing third in the triple jump at the 2020 Senior British Indoor Championships (41-9 ¾, 12.74).

Richardson called it “anyone’s dream” to earn a scholarship, come to America and compete in the NCAA Championships. While looking for the right fit overseas, she enlisted the services of RightTrack, and her mentor recommended Clive Roberts, Iowa associate head coach for horizontal jumps. On Aug. 24, 2020, Richardson arrived in Iowa City for the first time.

“Eavion is a phenomenal athlete with phenomenal potential,” said Roberts. “She is probably one of the strongest young ladies I have ever coached in the weight room.”

In Iowa City, Richardson sees a quieter atmosphere compared to her home in East London. She misses her family (and Nando’s grilled chicken), but enjoys the Midwestern kindness.

“Everyone is so friendly and you don’t really get that at home,” she said.

Because of that, it was a smooth transition to a new country, new university, new coach and new teammates.

“It was pretty easy to join this group,” Richardson said. “Everyone is so welcoming, especially in the jumps group. We chill together quite often.”

But she is still a bit homesick and will return to London after the season and after she has completed summer school with a master’s degree in sports and recreation management. Richardson intends to train for the 2024 Olympics, as well as the European and World Championships and Commonwealth Games.

In just six competitions this indoor and outdoor season, Richardson has personal records of 41-3 ¼ in the triple jump and 18-9 ¾ in the long jump (she has a wind-aided 19-2 ¾).

“We’re still in the process of trying to get it right with her,” Roberts said. “We’re trying to figure out how we’re going to get her over that hump.”

Answering the bell for a championship-level competition will help.

“I want to score in both jumps at Big Tens,” Richardson said. “I see glimpses of my long jump coming out soon, so I’m excited for that.”