“We had a big day in the women’s 100 hurdles led by Paige Magee,” Woody said. “She ran a huge PR in a school record time and finished top two in the prelims. It was awesome to see Myreanna Bebe running a huge PR to make her first Big Ten Final.”

Nathan Mylenek brought home the silver medal in the 3,000 meter steeplechase with a career best 8:35.40. Mylenek broke his own school record which previously was 8:38.53 from 2019.

“Nate Mylenek capped off a terrific night with a huge runner-up performance in the steeplechase and almost came out with the W,” Woody said.

Austin West finished next bringing home the bronze medal with a career best total of 7,805 points. West’s score also moved past the previous school record and currently sits in second all-time in program history. West recorded career bests in the 110 hurdles, the discus, and the 1500 meters. West posted a time of 14.84 in the 110 hurdles and a mark of 42.37 meters in the javelin throw. West closed out the competition finishing third in the 1500 meters with a career best 4:31.80.

Peyton Haack climbed back into the mix following a tough high jump on Day 1 to finish 12th with a total of 6,770 points. Haack recorded a career best in the discus throw with a mark of 39.46 meters and won the pole vault with a season’s best mark of 5.00 meters.

“The men got things started off with two terrific performances in the decathlon by Will and Austin,” Woody said. “To have two guys score 7800+ points on one team in the same meet is virtually unheard of. I also thought Peyton competed great today after having a mishap in the HJ yesterday. He fought back and had a huge PR in the pole vault that will build his confidence going into next year.”

Jenny Kimbro led the way for the Hawkeyes, bringing home the bronze medal in the heptathlon. Kimbro finished third in the javelin throw with a career best mark of 36.89 meters. Kimbro also finished fourth in the 800 meters with a time of 2:19.25. This is Kimbro’s third medal and fourth heptathlon at a Big Ten Championship meet and her seventh overall Big Ten Medal.

Dallyssa Huggins was next in fourth with a career best point total of 5,437. Huggins score puts her fourth all-time in program history. Huggins won the 800 meters with a time of 2:14.98. This is Huggins’ first heptathlon at a Big Ten Championship meet. Tionna Tobias finished ninth in her first career heptathlon with a career best total of 5,083 points. Tobias is now ranked sixth all-time in program history. Tobias recorded two top five finishes during Day 2. Tobias finished second in the long jump with a mark of 5.78 meters and fifth in the 800 meters with a career best of 2:23.98.

“The women heptathletes got the day started off great with some big team points from Jenny and Dallyssa,” Woody said. “Dallyssa had a great multi with a big PR and Jenny made the podium for the umpteenth time finishing third. Then she came back to back making another final in the 100 hurdles.”

Zack Pluff scored for the Hawkeyes, finishing eighth in the high jump with a mark of 2.08 meters.

Jordan Johnson brought home a bronze medal in the discus throw with a mark of 56.80 meters. Laulauga Tausaga scored four points finishing fourth in the shot put with a mark of 17.52 meters.

“I know it wasn’t the performance she wanted in the shot put,” Woody said. “But Lagi still finished with some big points for the team in one the best events if not the best event in the Big Ten. Jordan Johnson had a terrific day in the discus finishing on the podium in third place at his first outdoor Big Ten Championship and picking up huge points for the team.”

Mallory King finished eighth overall in the 800-meter prelims with a time of 2:06.93 to grab a spot in the final on Sunday. Logan Akason recorded a career best finishing 24th with a time of 2:12.34.

Wayne Lawrence, Jr. won his heat of the 400-meter prelims with a time of 45.97 to qualify for the final on Sunday. Julien Gillum and Jenoah Mckiver will be joining him as they finished eighth and ninth with times of 47.46 and 47.51. Gillum’s time is a career best. Cortney Strohman finished sixth in the 400-meter prelims to punch her ticket to Sunday’s final.

“I thought Cortney and Mal competed great to make it back into the finals in the 400 and 800 respectively,” Woody said. “We kept the great momentum going on the track with multiple finalists in the 110 hurdles, 400, and 800.”

The Hawkeye women are in seventh place heading into Day 2 with a total of 18 points, only 19 points behind first place Minnesota.

QUOTING WOODY
“I was very pleased overall with our men and women today. The men and women had a terrific day and set things up very well going into Championship Sunday. We have a big day in the field events tomorrow with multiple finals and all the finals left on the track. There are a lot of points still up for grabs, so we just need to go out and compete for each other all the way until the final event.”

UP NEXT
The University of Iowa track and field team returns to the track tomorrow for Day 3 of the Big Ten Championships. A complete schedule of events and links to live streaming and results can be found at hawkeyesports.com/tracklive. 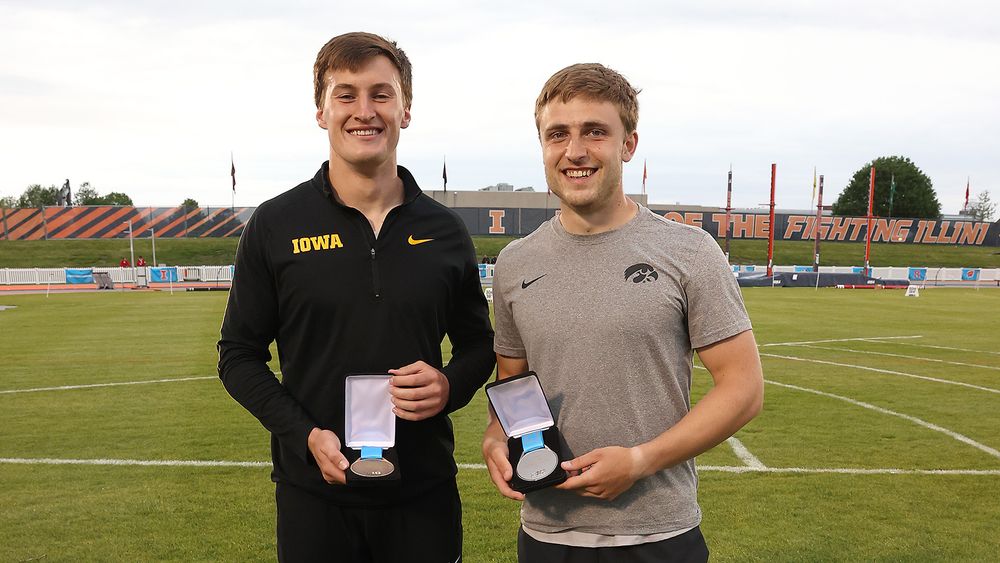