Need directions to a coffee shop or a shortcut from the Holiday Inn to E.B. Cushing Stadium? Ask Brown, a University of Iowa redshirt junior from New Providence, Bahamas. Brown spent three seasons at Texas A&M, where she was a two-time qualifier to the NCAA West Preliminary. She was 13th at the 2018 NCAA Championships and owns a personal best of 198-feet, 1-inch set at the Home Depot Clyde Littlefield Texas Relays in March of 2018.

“It is very nostalgic,” Brown said of her return to the Lone Star State. “It is interesting to see the little things that have changed. Coming back and seeing some of my friends is refreshing. But it feels weird being somewhere you haven’t been in a long time.”

Brown left Texas A&M in the summer of 2019 after having shoulder surgery. She trained in the Bahamas for a year before enrolling at Iowa in January of 2020.

Her reasons for becoming a Hawkeye?

“Werskey and Lagi,” Brown said with a laugh. 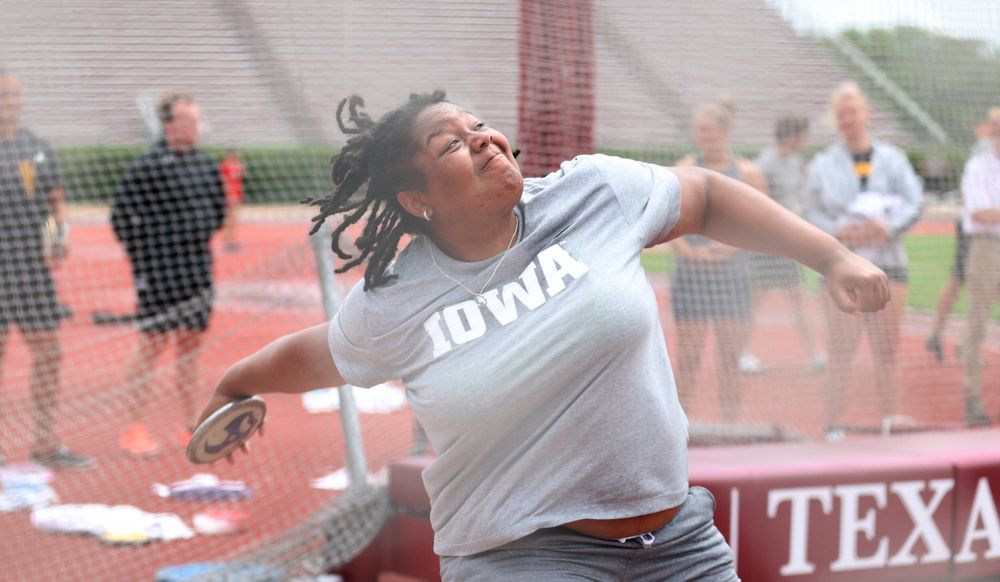 “It is very nostalgic. It is interesting to see the little things that have changed. Coming back and seeing some of my friends is refreshing. But it feels weird being somewhere you haven’t been in a long time.”

She is referring to throws coach Eric Werskey and senior Laulauga Tausaga, the defending national champion in the discus.

“At A&M she had great accolades and was a very successful thrower,” Werskey said. “She comes from a good coach back in the Bahamas, too. Above all that, she is a fantastic teammate and many coaches within the Big Ten have commented on that. She is incredibly supportive, she listens and is very coachable.”

Brown said there is a mixture of teammates and staff that either don’t realize she attended Texas A&M, or know she was a student-athlete there, so they bombard her with questions about the Aggie facilities or local hotspots.

“(On Monday) the team wanted to go to a coffee spot and I took them to my favorite, Sweet Eugene’s, where I used to go study,” Brown said. “They loved it.”

Brown is peaking at the right time of the season. She was runner-up in the Big Ten discus competition, throwing 185-9 on her third attempt (Tausaga won with a throw of 203-8). Although her marks weren’t as consistent as she wanted, Brown was satisfied that she got the job done and earned a silver medal.

“I’m looking at the series, I’m not looking at the medal,” she said. “I’m not upset with conference because it’s one of those things where the series wasn’t necessarily what I wanted because I only had a 56 (meter throw) and a bunch of fouls. Some of the fouls looked good, but fouls don’t count.

“Conference was a situation where you just need to get a job done and you don’t care how pretty it looks. I got a job done for conference. Series-wise and distance-wise it wasn’t how I was doing the rest of the season.” 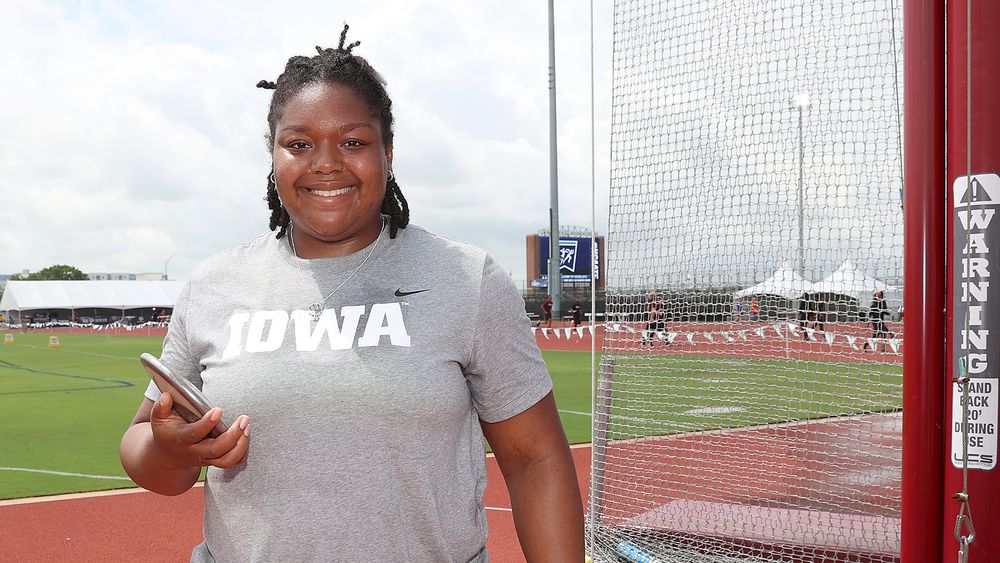 Brown’s “just get the job done” mentality will come in handy again Saturday at 1:30 p.m. (CT) when she competes in her third NCAA West Preliminary discus competition. It is survive and advance from here for Brown, who is seeded ninth, and Tausaga, who is seeded second.

If a mock meet the Hawkeyes held Saturday in Iowa City is any indication, it should be a successful meet for Brown. She saw a lot of good things, including consistent attempts.

“Things came together and fell in line,” Brown said. “That allowed me to execute and I’m hoping it translates to this meet as well. With a few more practices and getting re-adjusted to the ring, I will be able to replicate or do better than I did (in the mock meet).”

The NCAA West Preliminary begins Wednesday with the first of two days of men’s competition. Women compete Thursday and Saturday.

“We’re seeing great distances in training, she has been very consistent,” Werskey said. “By doing that, it puts her in a favorable position to not only be (an NCAA Championships) qualifier, but a finalist there as well.”