History in the Making

IOWA CITY, Iowa — It might not be time to look back at the most accomplished season in program history when the biggest event on the schedule is still to come, but it is impossible not to see it no matter where you’re standing or when you’re standing there.

“We are always thinking about the next event and the next meet, but we are definitely very pleased with where we are,” said Iowa director of track and field Joey Woody. “I tell these guys, this is the best team in the history of our program in my opinion based on what we’ve done.”

Woody says the gap could have been wider.

“We’re still scratching the surface,” Woody said. “At the Big Ten meet I think we left 20-plus points on the table. We thought that if we had a great meet we could have scored 150 points. We weren’t far off of that, but that’s the exciting thing too, when you’re beating teams by 30 points and you can still score 20 more.”

Iowa followed the outdoor conference championship with an impressive performance at the NCAA West Regional. The men qualified 10 entries to the 2021 NCAA Outdoor Championships in Eugene, Oregon, on June 9-12. The women earned five entries and are led by defending NCAA discus champion Laulauga Tausaga.

The Hawkeyes look every bit the part of a team getting better each day, and they’re doing it at the right time of the year.

“When you look at our season-bests, they have all happened in the last couple of weeks,” Woody said. “Even after the Big Ten meet, we’ve seen athletes progress in a positive direction. You look at a guy like Wayne (Lawrence, Jr.), who is feeling healthy and fresh. Nate (Mylenek) had a great race. You look at Jamal (Britt) and Jaylan (McConico), I think they did what they needed to do and they’re in a good place going into next week. 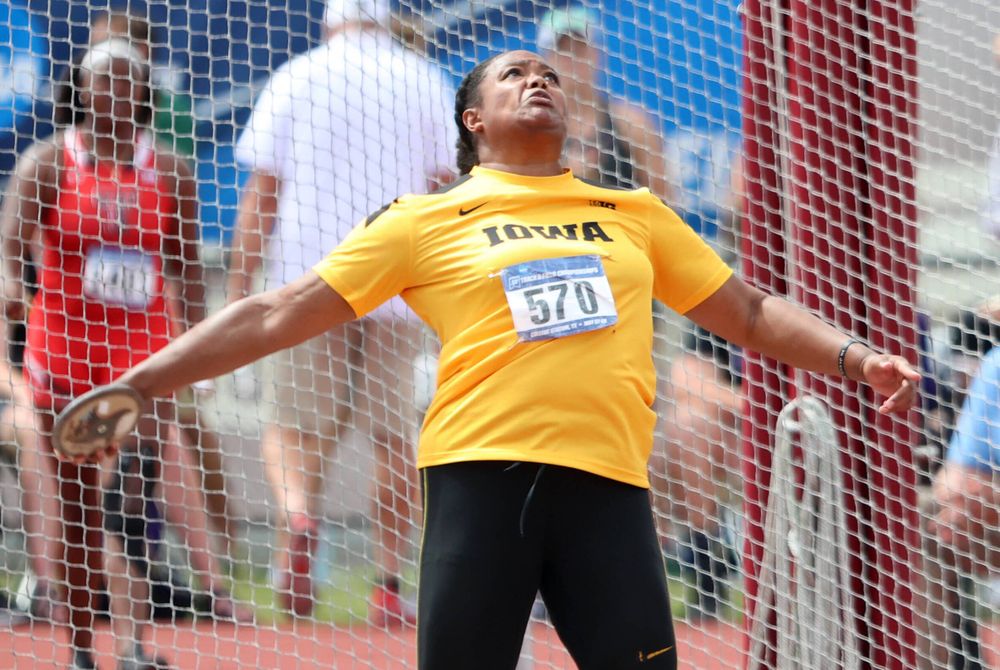 Tausaga will compete in the discus for the fourth time at the NCAA finals site. She won a gold medal in 2019 and placed fourth and seventh in 2018 and 2017, respectively. She won the shot put and placed second in discus at the 2021 NCAA West Regional, doubling in both events at the final site for the second time in her career (2018).

“There are a lot of great throwers, but she had her best meet of the season last weekend,” said Woody. “The girl from Arizona State (Jorinde Van Klinken) obviously is good. She is a foreign athlete who has thrown 70 meters, but Lagi was right behind her at the West Regional and I think she is close to putting things together.”

The talk on the men’s side is a top 10 finish. Rule the Big Ten and finish in the top 10 nationally, that has been Woody’s message since taking over the Iowa program in 2014.

“We have been talking about it for years. We expect to be a top 10 team consistently and we need to make sure everybody has the mindset to go out and execute. Do what we’ve already done and execute our events.

“We have to set a precedent that we want to be Big Ten champs year in and year out, but we also need to take that step at the national championships. I think this is the year to do that.”

The NCAA Championships run June 9-12 at Hayward Field in Eugene, Oregon. The championships are streamed live at Watch ESPN. A complete schedule of events with links to live results is available at hawkeyesports.com/tracklive.