McConico, a Bolingbrook, Illinois native, is the fifth Hawkeye in school history to earn the honor and first since Justin Austin in 2013.

McConico helped lead the Hawkeyes to a 2021 Big Ten Outdoor Championship by winning an individual championship in the 110-meter hurdles. He set a school record and tied the Big Ten Championship meet record with a time of 13.23. 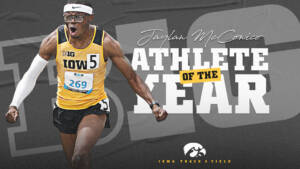